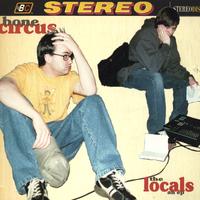 With hip-hop moving in hundreds of directions, it is impossible to keep one’s ear on every variation. Most, maybe, but never all. Hip-hop is universal, an art form that has grown from miniscule proportions to a cultural mainstay. There are so many types, even genres, which evolved from one simple formula. One emcee, one DJ. A beat, some rhymes. Some scratching, maybe a chorus. That’s how it all started, and occasionally artists are so inspired by the founders that they return to their roots and just rock using this oft-used blueprint. Of course, there are issues of originality, due to the fact that the entire genre of hip-hop is based on this seemingly basic song structure. The vast catalogue of sounds in hip-hop is proof of how far the music has come. Because of the changed criterion of evaluation, few people even attempt to take it back to the basics. An entire album without any influences beyond ’84 would likely be deemed outdated and dull.

Bone Circus, an underground duo from Texas, are just the medicine for those who are craving something new and old. Their EP, “The Locals,” is a time machine back to the days of block parties and emceeing for the sake of it. Don’t get me wrong, their sound is updated. Their production is much more complex than it would have been circa ’84 or so. The rhymes, as well, embody new-school values. Of course this is the case, as the simplicity of rhyme and song structure in the early days just wouldn’t fly here. The record just feels like an old-school one. Let me try to explain.

The beats, done mostly by DJ/emcee Sean Patrick, are pure old-school flavor, with loud, empty drums and sparse samples filling out each track. The element of the production that stands out most is the drums, which are heavy, loud, and thumping. Each beat is constructed with that old boom-bap in mind, and occasionally the other components of the track are almost totally drowned out by the drums. Each melody is remarkably simple, and sometimes the only discernible instrumental pieces of the song are the drums and a catchy piano loop or a bass guitar.

Lyrically, the duo of Sean Patrick and Eric Craddock are just rocking for the heck of it. Over an uncharacteristically smooth and complex track from Patrick, “20,000 Leagues Under Emcees” is a perfect exhibition of what they’re all about lyrically:

“My eyelids are heavy, my brain’s fatigued
I’m twenty thousand leagues under these emcees
Inferior rhymes? Mine’s are not up to par
Is this beat too wack or does it bang in my car?
Are my rhyme patterns fresh or way out of date?
Am I getting old ’cause I love that 808?
Man, that concert’s too long, I can’t stay up that late
Gotta get home, see my kids, keep my priorities straight”

Hey, at least these cats are honest. The question I’ve been pondering is this: Do they even care about the answers to those questions? They really don’t seem to, and it helps to know that their music is untainted by preconceptions about what it should sound like. They drop rhymes about religion, their families, and various other topics that usually aren’t touched in today’s posturing age of rap music.

“Problems,” the best moment on this EP, has Bone Circus dropping philosophy on conflicts in life. The beat is driven by a funky piano loop, and the drums have the same hollow, head nodding quality that Sean Patrick has perfected. These two aren’t the deftest verbalists, but they have found the perfect balance of playfulness and significance within their rhymes. “Problems” is the best example of this, as they execute intense topics with just the right amount of charisma. Even rhymes about religion don’t come off as preachy. They make up for a slight lack of pure emceeing skills with thought-provoking, personal rhymes. That is what will gain them a fanbase eventually. They don’t do it better than everyone else, they just do it differently.

It feels nice to praise guys like these. “The Locals” is never spectacular, but Bone Circus has got a unique sound, something many artists don’t. They are common people just like you and me, but they have a knack for translating their thoughts into rhythms and rhymes. This EP grew on me, with each listen I appreciated the loud drums and deceptively straightforward verses more. They have found that unique sound, a subtle blend of old and new. There’s no telling how well this material would translate when stretched to a full-length, but as is, “The Locals” is just right.