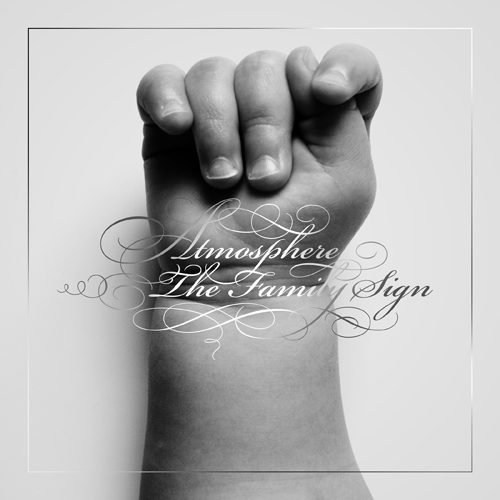 The album cover for Atmosphere’s new album “The Family Sign” is incredibly distracting for such a remarkably simple every day concept – a raised fist. The longer you look at it, the more you feel there’s something off. The fingers seem too pudgy. The thumb seems to be tucked into the hand awkwardly. The nails are an uneven length. The size of the hand seems disproportionate to the arm and wrist. Why is the knuckle of the middle finger concave and not convex? It should not be this fascinating to figure out – and yet it manages to be attention getting to the point you almost miss the artist name and title tattooed directly across the wrist in the middle.

Incredible as it seems this is arguably a metaphor for Atmosphere itself – a group that over the years has managed to avoid being pigeonholed into obscurity through distraction. It’s not for lack of naysayers trying. If your original claim to fame is that you’re the best white rapper in Minneapolis, a whole slew of holier than thou purists are going to snicker under their breath and dismiss you out of hand almost immediately. The incredible perseverance of Slug (the rapper du jour) and Ant (the wizard of production) has come through making music first and putting their image second, and they’ve made some incredibly good music in the process. “You Can’t Imagine How Much Fun We’re Having” and “When Life Gives You Lemons, You Paint That Shit Gold” are paramount examples of what the talented can achieve by ignoring the negative and living to create art. Stick any label from “indie hip-hop darlings” to “college dorm music” to “nerd rap for coffee shop chicks and white dudes” on them you like and they ALL fail.

The creativity of Slug’s rhymes and wordplay can be favorably compared to anyone from Nas to Aceyalone, and Ant’s beats to anyone from Alchemist to Premier. After a career spanning three decades they could just as easily title an album “Who Gives a FUCK That We’re From Minnesota? We’re GOOD.” They’re not just good though. Slug is good enough that if he wanted to pen songs about being a criminal mastermind or living the most lavish lifestyle, they would be among the most cinematic in rap music. Instead songs like “The Last to Say” are far more dangerous because they’re personal. Slug rips tiny little pieces of his heart out of his chest and lays them bare, bloody and beating right in front of you in the song, getting in touch with his emotions in the most painful way possible. These words clearly came from a dark place:

“As far back as he cares to remember
He used to see his old man lose the temper
And momma’s pretty face’d catch it all
On a regular basis, the nest would fall
But he was always safe from dad’s rage
Cause momma sacrificed in his place
Two dozen years of the blood sweat tears
Avoid the mirror, losin her hair from the fear
She never left him, stayed inside
He beat her ass up until the day that he died
In fact the biggest beating was the day that he died
So now it’s too late for her to make a new life
She gets to mourn for the touch of a punch
Won’t never admit that she ain’t clutchin it much
Some day she’ll die, it still won’t be done
The anger lives on through their son”

As the song unfolds, it becomes hard to find anyone to root for. The abused mom could have left and didn’t. The psychologically scarred son could have vowed to not be like pop, but turned out just like him. His abused girlfriend takes it because she feels bad about how he turned out and thinks her love can make it all better. There are no winners here. This isn’t a song for people who are afraid of their own emotions, because if you are the least bit in touch with yourself, you’ll become genuinely sad at how the negative cycle of violence remains unbroken – and for all you know this could be total fiction. It doesn’t feel that way. The place Slug is coming from lyrically seems too intimately understood. If it’s not about him, or someone he knows really well, then it’s just a testament to what a provocative storyteller the man is. Ant’s understated production lays back and gives Slug the canvas he needs. “You can’t hold hands when they make fists/and I ain’t the first to say this.” Maybe someone in an abusive relationship will heed these words.

If you’re not familiar with Atmosphere, this review has thus far given you the impression they are too serious to have fun. Not at all. “Millenium Dodo” flips the coin and shows you Slug can be alpha male for a night on the town.

“I only act like an asshole
Why don’t y’all stand back? Let the man grow
I can’t tell what time this is
But I know that bill was a counterfeit
Hey bartender, pull off the top jar
I gotta think about where to dump this cop’s car
I’m too slick, so fuck your bullshit
I’m coolin in the corner with my my custom pool stick
My granddad must have played the jazz
When I bleed, you can hear my heartbeat snap {*fingers snap*}
All around the world, it’s the same bar
Wishin that the jukebox had some GangStarr”

I’ve got the stick, I suck at pool, but like Slug I’m invariably disappointed by the selection of any jukebox at any such establishment. The moods change from one song to the next, and it’s under such expert guidance you would think Slug and Ant are two heads attached to one body – they always seem to know what the other is thinking. Who can say if Slug asked Ant for a spaghetti Western sound on “Ain’t Nobody,” or if Ant played him the beat and Slug was immediately inspired to write for it? It’s almost easier to imagine they are so like-minded they simultaneously crafted it together.

“Spoke up, hold up, I’m on that grown up stuff
I’ll be the butt of your joke, because I can hold my cup
You jumped in that tough, you’re tryin to soak it up
You chose to go and get stuffed, I’m not your gold rush
Yeah I showed up; was hopin to post up
But every few moments you move more closer
I noticed the donuts – I’m open to no such
Like it’s my obligation to show love – you know what?!
Yeah, you know what?!
Yeah I came to party, but I don’t wanna party wit’chu”

Slug is the hip-hop rugged individualist who is not afraid to go his own way. Funny thing about being an individual though, and it’s something Eminem noted in his own comical way on “Without Me” – when you stand out from the crowd suddenly everybody wants to be just like you. There are a million wannabe Slugs and Ants out there in independent rap, but they just aren’t making the quality of music Atmosphere is. It’s something Del said years and years ago: “emcees should know their limitations.” Let Atmosphere be Atmosphere, because they’re the only ones who can do what they do the way they do and have the cult following that they do. From the boom bap of “Just For Show,” to the the dirty guitar and dusty vocals of “Bad Bad Daddy,” to the somber and thoughtful feelings of “Something So,” it’s a uniquely stratospheric experience when you’re in the clouds with Atmosphere. It’s hard to want to come back down.