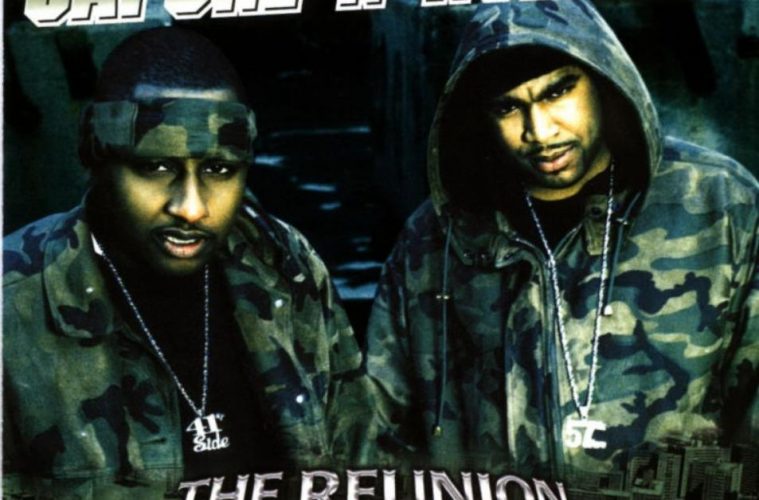 Even if you’ve been sleeping on this group for a minute or two, it would be pretty hard to be a hip-hop head and not at least recognize Noreaga, Mr. “What What” of the rap industry. The man certainly has his passionate supporters and detractors. Whenever he blesses the hook of a song or makes a cameo, his trademark vocal tone makes a pleasant impression; but served in doses of full length songs his lyrics often reflect a rhyme scheme that reflects Dr. Seuss in structure without even achieving the depth or complexity of his stories.

For that reason, many people are gonna be glad to know that his grimy crimey Capone just got released from doing a bid, and is ready to tag team with his partner. Capone has a voice that is parts Nas, parts AZ, and parts MC Shan – sounding like the ultimate Queensbridge representative. When he tag teams with Noreaga the results can be golden – each overshadowing the others shortcomings and building up their respective levels. That’s why to this day many heads still hail their debut album “The War Report” as a 90’s hip-hop classic.

For better or worse, that means that the expectations for a new CNN album are incredibly high compared to most other groups who put out their sophomore album. Starting with their lead single though, CNN made the right moves. “Phonetime” has L.E.S. producing a smooth piano groove that’s the perfect backdrop for Nore and Capone to present a fictional yet starkly real conversation between two thugs: one behind bars, and one still on the streets. The flipside “Bang Bang” is almost over the top in it’s brooding machismo and chunky Alchemist beat – even Foxy Brown sounds butch in a cameo – but the energy of the track still holds it together nicely.

The people dropping singles from this album at Tommy Boy definitely had the right idea by following up this banger with “Y’All Don’t Wanna” – it features a Nokio beat that is pleasantly reminiscent of DMX’s “What These Bitches Want” and will undoubtedly have even the hardest head-nodding thugs heading for the dancefloor to get it krunk. Capone is definitely on a mission here – no pooh-butts allowed.

“Yo, imagine us cowards
You still live with mommy, still get allowance
I chase Henny, bubblin ounces
I returned off a short stretch, stuck in the mountains
What’s this I hear, huh? This is MY year”

The interesting thing about this album is how without overtly trying to it seems to have struck a delicate balance between the “thugs” and the “backpackers” in the much fractured hip-hop scene today on the East coast. How else could you explain the vibes of the DJ Premier produced “Invincible”? Nore gets EXTRAprops here for admitting that his last solo album was “half-assed.” If that ain’t enough peep guest vocals by Nas on the ironically titled “B EZ”:

“I heard you fags wanna catch me off guard
Put tecs in my heart; the death of Escobar,
under your breath, whispers in the dark
I hear it cause the street ain’t loyal to chose sides
Prepared for the beef, whoever lose dies”

There are some critical points to address about this LP. As mentioned earlier Noreaga and Capone set off each other’s weaknesses – and the latter’s main one is a tendency to forget to change up his pitch and provide the correct emotive response. His opening verse on “Queens Finest” illustrates this, especially when compared to the thick vocals of Prodigy, the musical intonations of Noreaga, and the underrated vocal poison of Havoc. CNN should also not be considered judges of good talent. Even though “Don’t Know Nobody” has a hot beat by Lord Finesse neither Musaliny or M.A.Z.E. makes anything but the smallest blip on the hip-hop radar; with their verses simply leaving one asking why they didn’t just cut the mic off when Nore and Capone were finished. “Straight Like That” has the same problem except that Algado & Shoballoti have even wacker names and no previous cameos on a Noreaga album to their credit.

There’s more than enough things that work right though. Noreaga can occasionally impress with his flow and lyrics, and really shines on “All We Got is Us” – and on the whole does not completely embarass himself as he has done on some of his solo albums. In fact, his performance on a one to ten scale can be rated at least a 7. With Capone giving Noreaga the balance he has always needed and Noreaga helping Capone keep his name alive in the business, the return of this talented duo is long overdue and well received. Even the odd songs like “Full Steezy” seem to make sense in the context of this long player album and have a tendency to get better with each listen. It’s not a perfect return, but we’re glad they’re back.