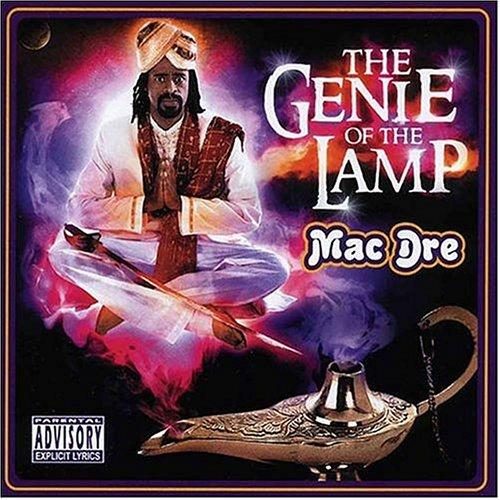 Mac Dre :: The Genie of the Lamp

If you already know the Mac, you’re probably more than a little mad that after over a dozen years of releasing Bay Area classics the Vallejo native is still little recognzied outside the West coast. On the other hand Dre, the self-described “Genie of the Lamp,” says it best like this on his opening/title song: “I’m playing for the A’s, is you working for the Mets?” Mac Dre knows his audience, and his audience knows him. He’s certainly one of the most unique artists in rap. In pimpish style he’s reminiscent of Suga Free, but he’s not as fast or high pitched. His flow is a bit like Too $hort’s in terms of it’s pacing, although that would be more the old “Freaky Tales” $hort of the 1980’s than the faster flowing Todd Shaw of the 21st century. The best way to describe Mac Dre’s style is mellifluous, or you can get it straight from the Genie’s mouth:

“Multi-cultural, hot vocals
Everywhere I go I get love from the locals
They buy it, slump it, knock it, bump it
My voice is an instrument, I’m kind of like a trumpet
They try to figure out, my estimated wealth
I’m a hot item, they can’t keep me on the shelf
Stores restock me – man, whores be jock-ing
Benihana waitresses, they pour me sake”

Throughout “The Genie of the Lamp,” Mac Dre uses a variety of producers who are all highly effective. Tone Capone does the funky swing of the opener and the blunted beats of “2 Times & Pass.” Shouman does a damn good DJ Quik impression on “My Alphabets,” which makes it no surprise the aforementioned Suga Free guests on it, but he also laces some old school influences into “I Feed My Bitch.” One Drop Scott handles “Not My Job” and the hilarious “Err Thang,” which we simply have to break from discussing the production to lift a few quotes from:

“I’m the only nigga you know that walked before he crawled
So give it to me you BEEZY, I want it all
All of it, y’know? Erry thang
I need it before I start hittin that hairy thang
This is a gang, and I’m in it
Dick so good I charge by the minute
Is you lost? It costs to be around the boss
I play bitches better than Tiger play golf!”

Dre proves he is an able producer behind the boards himself, with the heavily twonked out sound of “Early Retirement” (in which Dre declares himself “doper than a Bobby Brown piss test”) and the old school throwback drum’n’bass style of “Hear Me Now.” The rest of the album is a mix of all different kind of beat miners, but let’s give a little extra dap to T.D. Camp for the infectious groove on “She Neva Seen” and the 70’s pimptastic funk Traxx put into “Non Discriminant.” Basically doe you can’t go wrong on any of these songs from the start to the Rob-Lo produced “Bonus Track” at the end. If you’re still doubting Mac Dre though, it simply because you haven’t heard him yet. Get down with ‘Ronald Dregan’ and check out his policy of trickle down pimpanomics, because it’s some of the best straight out of the West.