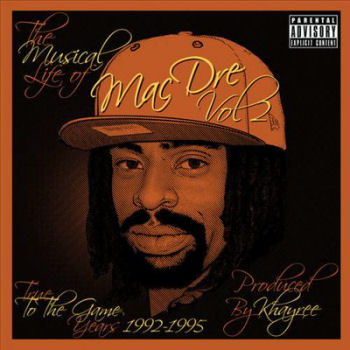 Last month we endorsed “Volume 1” of Mac Dre’s “Musical Life” as compiled by his former producer Khayree. “Volume 2” follows shortly after and immediately invites scepticism. While it was relatively clear that the first disc subtitled ‘The Strictly Business Years 1989-1992’ commemorated the early years of Mac Dre’s career under the wings of Khayree before he had to serve a prison term, the billing ‘True to the Game Years 1992-1995’ is somewhat dubious. For starters, if Strictly Business was a label, what was True to the Game? Mac Dre’s last official project with Khayree came out in 1993 and when he returned in 1996 with “The Rompalation,” the producer was out of the picture. Incarceration can be a trying time for relationships. What went down between the two is not for me to speculate, but the subtitle suggests they were in contact at least until 1995. What’s more, “Volume 2” opens with a phone conversation between Mac Dre on the prison phone and his Young Black Brothas back home, and a number of tracks here were recorded when he was behind bars. They were released on two seperate records, the EP “Back N Da Hood” (1992) and the full-length debut “Young Black Brotha – The Album” (1993). If you are a Mac Dre fan and expected to find unreleased material from 1994 or 1995, possibly recorded on work release, you will be disappointed. Fans will neither be content with short exerpts from phone calls (“The Following Conversation,” “Think 4 Yaself”) being sold to them as ‘unreleased’ Mac Dre tracks.

The follow-up essentially gathers recordings from the later years of the period the first compilation already covered, with greater emphasis on the joints from jail. Considering Mac Dre was by most accounts wrongfully convicted, to hear him reflect on his personal situation and life on the streets on cuts like “Back N Da Hood,” “93” and “I’m in Motion” is an emotional experience uncommon for the often angry early ’90s. The objection remains that well-written raps had to be transferred over a phone line to beats that deserve better vocal performances. Clearly Mac Dre’s imprisonment deprived Young Black Brotha of the chance to put out another gem like Mac Mall’s “Illegal Business?” and Ray Luv’s “Forever Hustlin'” (the excellent “Young Black Brotha – The Album” being closer to a compilation).

“Volume 2” adds “Give ‘Em a Good Chase” to Dre’s jailhouse raps, apparently a legit novelty but really just a sketch of a song. And “My Chevy (Extended Mix)” features a Mac Mall verse. Also from the ‘unreleased’ list, “California Livin (Mob Mix)” paints the Mac Dre staple in an interesting, almost industrial tone, as if Paris were behind the boards for this one. If you’ve witnessed Khayree’s 2001 plundering of the YBB vaults “The Unheard,” you’re familiar with “I Wake up in Da Mornin’,” a stellar six-minute tune with Coolio Da Unda Dogg, Ray Luv and Dre delivering social commentary over a smooth sax-laced track. “Vol. 2” also closes a few of “Vol. 1″‘s gaps such as “Young Playah,” “What’s Really Goin On?” and particularly “Punk Police,” one the most spot-on songs in rap’s discourse on law enforcement. Ditto for “Back N Da Hood,” which adds the issue of the penal system.

So – more recommended listening for newer Mac Dre devotees but far from a find for longtime faithfuls. Still if you’d like to own the early works of Andre Hicks on two albums, “The Musical Life of Mac Dre” gets the job done.