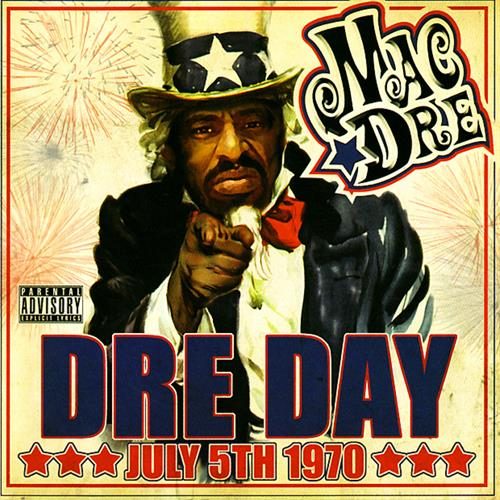 It was the last thing left to do. After putting out four double disc greatest hits collections, mixtape greatest hits, over 25 “Thizz Nation” mixtapes, and various compilations there wasn’t much left to do with the Mac Dre name. Finally someone decided to stop pretending there was any more unreleased Mac Dre material and just remix the Mac Dre material that was left. Mac Dre joins a small class of legends who have been given this treatment in Tupac and Biggie. Of course, the people over at Thizz Entertainment weren’t exactly forthcoming with this information. “Dre Day” isn’t billed as Biggie’s “Duets” or Tupac’s “Numixx Classics.” It’s just another Mac Dre release with little information to go along with it. The blurb on Amazon promises “unreleased mixes” and “seldom heard” Mac Dre tracks. This ends up meaning a few classic Dre tracks with new verses from current Thizz artists mixed with obscure Dre tracks. While many fans cried blasphemy when Pac and B.I.G. were given this treatment, I have to say that in Dre’s case this may be one of the better uses of his catalog since his death.

The album kicks off with “Since ’84, ’94, ’04” featuring Dubee and Mistah FAB. The track is a remix of “Since ’84” from the “Ronald Dregan” album and is one of the most fulfilling remixes since it rolls with the theme of the original track as it unites three generations of Thizz. Chop the Hookman makes an uncredited appearance doing the hook and gives it a nice twist. Another notable remix is “Feeling Myself” which finds Keak Da Sneak and the late Johnny Cash joining Dre on the funky classic. “Get Stupid” finds Dre reuniting with the Cutthroat Committee for another remix to a classic. The last hit to get the treatment is “Thizzelle Dance” where Miami and Keak Da Sneak join Mac Dre to instruct you how to do his famous dance. To be honest, the extent of the remixing comes from dropping one or two Mac Dre verses and adding new verses. Though most of the remixed tracks are from Dre’s more recent work, the new verses actually give the tracks a fresh twist and give you a reason to purchase this CD if you already own said tracks. None of the tracks come close to the dopeness of the originals, but they are still enjoyable.

The rest of the tracks are basically obscure joints thrown in for those looking to complete their collection. Some tracks aren’t too obscure, such as the B-Legit assisted “G.A.M.E.” Originally from B-Legit’s “Throwblock Music,” the track is a dope collaboration that I probably wouldn’t have peeped since I haven’t heard a B-Legit album in a few years. The obscure tracks definitely live up to their name. “On Da Run” isn’t anything I’m familiar and features a rejuvenated Mac Mall making the most out of his verse. “6-500” is nothing more than a lost Mac Dre freestyle probably meant for a mixtape as he rhymes over the Scarface “Mary Jane” instrumental. There are actually a few more tracks that failed to reach the three minute mark and sound like unfinished Mac Dre songs. Out of all of them “Roll Wit It” is the one that stands out the most.

Overall, I would recommend this CD to casual Mac Dre fans. By casual, I mean those fans who supported the man while he was alive but haven’t been buying every Thizz Ent. release since the man’s death. I put in this disclaimer because Thizz Ent. has a history of shady advertising and reusing tracks. If you check out Amazon you’ll find that not only did they cram a whole bunch of old Mac Dre material on “Pill Clinton,” they went as far as changing the title of that old material in order to mask the fact it was old. Looking at last year’s “Starters In The Game” you see that the “Since ’84” remix isn’t even new as it was featured on that album. On top of that, Thizz also routinely uses old or unreleased Mac Dre material on their new releases to be able to stick the “featuring Mac Dre” tag on an album. So that “unreleased” or “seldom heard” track might have been on the latest Mistah FAB CD or Thizz Nation mixtape. Basically, a lot of the music on “Dre Day” was new and fresh to me because I haven’t followed Thizz Ent. as closely as I used to after Mac Dre’s death. For those who’ve bought the various Mac Dre mixtapes and “albums” released since then, you might already have the bulk of the material on “Dre Day.”