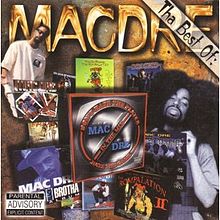 You can’t have a greatest hits CD without any actual hits. While some may argue against this statement, Mac Dre seems to be embracing his underground status and lack of commercial exposure on his latest release. This double disc set is titled “Tha Best of Mac Dre,” not “Mac Dre’s Greatest Hits,” and it’s very likely Mac Dre did this on purpose. With over 10 years in the game and well over 10 albums, compilations, and collaboration albums to his name, Mac Dre’s “Best of” is definitely overdue. Aside from obviously earning a “best of” album, this CD is also the perfect gift to his fans, especially those outside of California who may find it hard to track down every one of Dre’s multiple CD’s.

The quantity aspect of this collection definitely earns its keep as Dre includes 32 tracks on 2 CD’s, each lasting roughly 70 minutes. Mac Dre also makes sure to include songs from his entire career, aside from his slew of current releases, the set contains songs from each of his solo albums and a few compilations. Appropriately, 8 out of the 32 tracks on this set come from Mac Dre’s classic debut CD “Young Black Brotha: The Album.”

For those not familiar with Mac Dre or bay area rap in general, this music is all about the funk. This isn’t the usual g-funk associated with Cali, but a grimier, almost dirty type of funk that embraces the gangsta/mackin’ lifestyle that Dre leads. On the musical side of things, expect a thick slab of bass paired with tight snare-heavy drum tracks and funky musical samples to top it all off. Some of the tracks even sound like something straight out of the 70s and 80s. At times the music is sample heavy, explaining its resemblance to funk tracks from back in the day, but over the years bay area music has developed its own identity as the new age funk for the next generation. Mac Dre has always stayed true to this formula and his greatest hits sum up that love for all that is funky.

Lyrically Dre might not be appealing to all rap fans as he isn’t Talib Kweli or Common on the mic, Dre is all about repping his hometown and spitting game on a track. But don’t be mistaken, Mac Dre does mack on track but he does this better than most cats rap. His voice is smooth and almost musical when he spits, perfect for his favorite subject matter. Flow wise Dre can flip almost any beat with expert precision. Though mostly keeping a more laid back flow, Mac Dre has been able to keep his flow fresh from day one. Important in his flow and lyrics are timing and accenting certain words and syllables. Dre’s lines don’t always contain the same number of syllables, which is common for a lot of MCs because it makes it easier to keep a cadence. Instead, at times Dre manages to stretch words out and shorten others to match a beat precisely. But that isn’t the only trick up his sleeves, even when he’s straight rapping word for word, the Mac finds ways to rhyme words within lines and still stay true to his topic. The man can rap, he can mack, and he melts the two into one distinct style track after track. And if for some reason you’re still unsure what this mackin’ is all about, it’s basically another word for spitting game to females or otherwise. So you know Mac Dre has to be one smooth cat in order to earn the “mac” in front of his name.

It’s difficult to point out stand-out tracks on a best of CD, but there are definitely a few songs on here that should have hits for Dre. The set starts out right with the classic “2 Hard 4 The Fuckin’ Radio,” abbreviated as “Too Hard” on this CD. This cut is straight old school flavor on the beat with Mac Dre’s game at top notch form on the mic. The next track features everyone’s favorite pimp, Too $hort, teaming up with two of the bay’s most notorious macks, Mac Dre and Mac Mall. “Nuthin But Love” is an ode to money over a dark beat and features Too $hort’s signature flow both on the hook and on the track. Later in the first disc comes “Life’s A Bitch” from Dre’s “Stupid Doo Doo Dumb” album. A track where Dre highlights the struggles encountered by his crew throughout his life. Dre himself has been a victim of circumstances as he served time in prison for conspiracy to rob, a charge that stemmed partly from police using his lyrics as evidence. He sets the record straight when he says “they sent me to the pen for five years for a crime I never committed, but those 5 years got me thinking maybe I shoulda did it.” The track even starts off with an excerpt of a news story concerning his arrest.

On the second CD the standout tracks continue. “I’ve Been Down” details Dre’s time in the pen with detail, right down to a stabbing in the movie room. “Valley Joe” is a shout out to his hometown of Vallejo and features B-Legit (E-40’s cousin) repping just as hard as the Mac himself. For those left wondering about the title of some of Dre’s albums, “Stupid Doo Doo Dumb” helps explain just how Mac Dre’s mind works and what some of his lingo means. The hook features Mac Mall, and as always both Macs match the track well. “Anti Square” is a hilarious self-explanatory song about Mac Dre’s philosophy on those he considers lame:

This definitely a situation many people can relate to. Overall, I would be hard-pressed to say there is a bad track on this CD. Some of the guests aren’t as tight as the Mac himself, but overall the music is of equal quality. The beats are all on point and reflective of what rap music is all about in Vallejo and San Francisco. With all “best of” collections there will always be complaints of tracks not included or tracks not worthy of such a distinction, but overall this is solid collection and summary of Mac Dre’s lengthy career. So if you manage to find this gem at your local or even retail store (this reviewer found it at a large electronics chain store for only 14.99), be sure to pick it up and be prepared to listen to some of funkiest music and smoothest game ever laid down on a track.