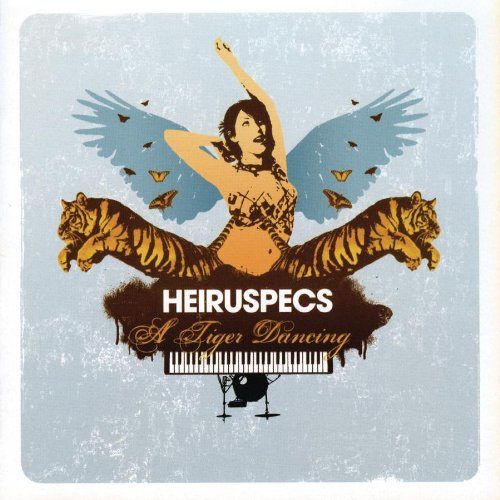 Who the fuck are the Heiruspecs? What IS a Heiruspec anyway? Fortunately the Razor & Tie site offers some clarification:

Heiruspecs – n. var of ha-ru-spex [Lat.]- A haruspex was a soothsayer in ancient Rome. Felix misspelled it when he wrote it on his hat in high school and it stuck. He also tattooed it on his left forearm.

Answer one question, and you end up creating another – who the fuck is Felix? Well he’s the lead MC of this St. Paul hip-hop collective. The group’s membership also includes Muad’Dib on beatbox and vocals, Twinkie Jiggles on bass, dVRG on keys and Peter Leggett on drums. That’s right, the Heiruspecs are an organic/live hip-hop group in the mold of The Roots, except they hail from Minnesota and not the Illadelph of Pennsylvania. Can live hip-hop from the Twin Cities be dope? Before you start hating, don’t forget that Prince got his funk from the Land of 10,000 Lakes. Besides the Twin Cities rap scene has been heating up for a while now. Atmosphere, the Rhymesayers collective, Doomtree, the Manifesters, Golden MC, the list goes on and on. To be perfectly honest I got the last three from a Minneapolis hip-hop website, but any time you can start a list with Atmosphere and Rhymesayers there’s definitely something brewing. And by the time I heard the sentiments expressed on “Dollar,” I realized these Heiruspecs were speaking a language I could relate to:

“Lost my peace of mind when Jam Master Jay died
Role model from the git-go, inspiring, guide
First rap tape I ever had was Run-D.M.C.
From there the voice of hip-hop, embedded in me
So what’s inside of you? A can of worms, burning pockets
You’re a cap thrower, I’m heavy metal block hits
Shit hits the fan, I brought my umbrella
Make kids nod they heads when I flip in acapella”

The Heiruspecs are starting to sound like the best kept secret out of the Twin Cities to me. Maybe I need to get up on the Manifesters, Doomtree, and the Golden MC after all. Heiruspecs live sound and passionate hip-hop verses translate remarkably well into print on “A Tiger Dancing,” which makes me think their live shows have got to be hella tight. I can’t help but laugh on the title track when I hear the punchline “we clown and ‘Get Around’ like Tupac, but still find the time to rip this shit open like one of Hulk Hogan’s tanktops.” The songs cover a wide variety of moods and emotions, from the somber and almost spoken word feel of “32 Months” to the up-tempo in your face attitude of “Fist” to the straight up funk jam sound of “Get Down.” If my words aren’t convincing though, check out the words of Felix on the first single “5ves” – Heiruspecs speak best for themselves:

“And the shadow on my lawn becomes a midget
As the sun comes rolling along
A little bit more hustle
As I nod to my neighbors
They have no idea that they could be in this song
Their cool is still the dopest person out there
My mother
She accepts me for my rap
As if rapping is my lover
And she, she accepts me for my rapping of course
Because art needs inspiration needs a source”

Somewhere out in the unexpected confines of St. Paul’s own Central High, a place formerly known only for the one-hit wonder R&B group Mint Condition, the Heiruspecs found that inspiration and have stayed together ever since. “A Tiger Dancing” shows that they already perfected their group and their word interplay, and that their years of paying dues in hole in the wall clubs perfected their craft. The best thing about listening to the Heiruspecs is that they sound like a rap group on the beginning of a long journey, as opposed to one who finally “made it” and feel content now that they’re signed and distributed nationally. Heiruspecs still have an audience of doubters and naysayers out there to convince who’ve never heard of them or their work, but this writer can say that listening to these tigers dance convinced me they’re ready to pounce on the title of “the next shit.” Underground rap with a refreshingly live sound and pounds of lyrical skills beyond just being able to snap better than the next man – that sums up both the Heiruspecs and “A Tiger Dancing” best.