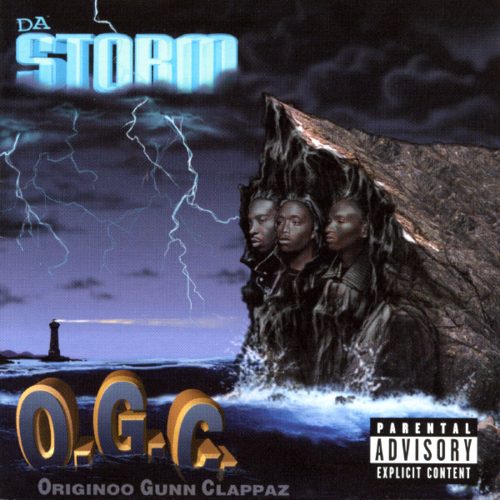 Straight outta Bucktown comes the highly anticipated debut album from Originoo Gunn Clapazz (O.G.C), titled “Da Storm.” This album has been getting hype for ages, and heads everywhere have been wondering when this one was gonna drop. Now it’s finally here, and for those of you who haven’t gotten your fill of acts from the Duck Down team, this one’s gonna make you undo your belt a notch or two.

If you’re looking for on point lyrics, this album definately places emphasis in that area. Louieville Sluggah, Starang Wondah, and Top Dog can keep fake MC’s on lockdown with ease. The beats ain’t nothing to sniff at either, although they won’t make you stand up and say DAAAM! “Hurricane Starang” has a consistent, thumping beat which’ll keep your head on nod mode throughout. This cut tells the entire nation the power of the Boot Camp Clik; that if you fuck with one of ’em, you fuck with all of ’em. Check this: ‘Scream/Hallelujah/But it still won’t help ya/Run from OGC/And get caught by Heltah Skeltah/Jack to the otha side/Run for cover/Hide/Niggas still wouldn’t be safe/If I let ’em slide'(track #7 1:42-1:52).

“Da Storm” tells you that OGC will be making their presence felt immediately, and they’re not to be taken lightly. Like a Weight Watchers dropout hitting the water off the high board, everyone knows OGC’s in the house. If you don’t know, deaf people can’t listen to music anyways. You gonna step to OGC, you better come prepared cause, ‘Who shot ya/Lock ya down/Now I got ya/From this jam I am/The Phantom of the Opera/Don’t say a word/Take it to the streets/Fuck the props'(track #10 2:08-2:16). This crew is out to tell anybody who’s willing to listen, as well as anybody who isn’t, that they’re not to be taken lightly.

Some other notable cuts on this album include the first single, “No Fear”, which describes OGC’s feelings upon their arrival on the scene. That’s a point that after listening to the CD, one should easily understand. Throughout the whole album, OGC exerts a positive confidence about being able to make it in the game. Another point stressted throughout is one of an alliance to the East, but it doesn’t turn the CD into an East/West rivalry. The listener is reminded of the East coast way of living, but not once do any of the members say that the way they live is better than anyone else does. Other good tracks include “Danjer”, and “Wild Cowboys in Bucktown”, featuring the lyrical talents of Sadat X.

For as much hype as this album got before its release, it manages to live up to most of it. This isn’t a release that will become a hip-hop classic, but it will be one that gets frequent rotation from listeners everywhere. Even though only one member is known as Louieville Sluggah, this entire crew swings some heavy lumber.