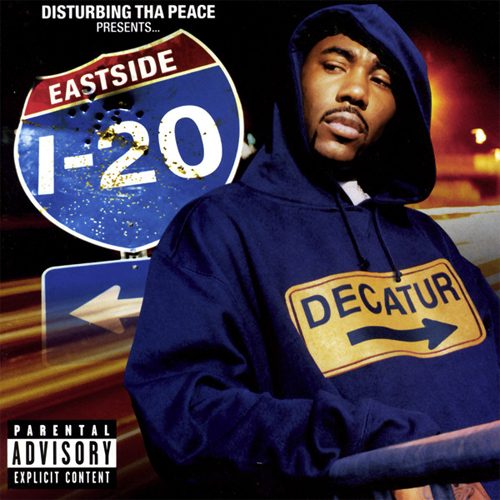 Good news for aspiring hip-hop artists out there – have at least a modicum of talent, join a more famous rapper’s clique and lo and behold you’re almost guaranteed your own album. It’s worked well for members of G-Unit, as both Lloyd Banks and Young Buck have gotten their shine. It worked for Biggie’s fam in Junior M.A.F.I.A., as both Lil’ Cease and Lil’ Kim broke out on their own. There’s no limit to the amount of rappers and groups Jay-Z will spin out of Roc-A-Fella Records, with Young Gunz being the latest and many more on tap. Someone once said of the business world that it’s not about WHAT you know but WHO you know, and it seems equally true in the rap world. By virtue of their association with Ludacris, the members of Disturbing Tha Peace are now getting their turn in the spotlight. A week ago today Shawnna became the first to go solo, but now it seems that I-20’s ready to get a piece, and who can blame him? No need to question his desire for bigger fame and fortune than as Luda’s sidekick – it’s “Self Explanatory.”

Hard pressed to identify which one of D.T.P.’s rappers is I-20? Here’s a shortcut – imagine a rapper who sounds screwed and chopped even before the beat is slowed down, and you’ll immediately know who he is on any of their songs. I-20’s lyrics are par for the course as Southern rappers go, mixed with his hometown pride, and some occasionally strong braggadociousness that at times borders on being ludicrous (no pun intended). To be a rapper in today’s highly competitive market, having a big ego about yourself is a must, because a lack of confidence in who you are and what you’re saying leaves the door open for 20 more cocky MC’s to take your spot. Big label rappers only get to express self-doubt if their natural tendencies are comedic, so the only time you’ll ever hear a rapper openly say “I’m not sure I’m that fresh” is if he’s signed to an indie imprint. Nevertheless if rappers use their cocksure attitude as a shield, I-20’s is so heavy it’s a wonder he can hold it up. Just peep his “Eyes Open” intro:

“So before you cast your ballots on who’s the greatest MC
Now that Jordan done retired and LeBron’s in the league
You gon’ have to mention me, and believe me it hurts
Cause y’all didn’t never pay attention to my previous work”

Well he’s right about the last line. Still you have to openly question whether he’s lyrically the equivalent of LeBron James, let alone the Michael Jordan of rap. The only ones with that many wins and championships would be somebody like KRS-One or Ice Cube, or if “retirement” is the comparison make it Jay-Z. To be better than a new jack like LeBron, that would mean I-20 is better than Joe Budden, Oh No, and Pitbull. He might beat one of the three head to head on a good day, but the other two would take him to the lane and score in the paint almost every time. Eventually you can’t help but notice that I-20 is retreading the same thug shit you’ve already heard from other similar rappers, such as on “Meet the Dealer”:

“Y’all on that weak shit, that wantin beef shit
When I ain’t rap dawg, I’m on that street shit
So we can get it started, cause I ain’t never scared
Before you call us out, you better prepared”

Can you imagine any other hardcore rapper spitting the same lines? Exactly. “We on that block shit, bust your glock shit.” That type of shit just doesn’t cut mustard if you don’t do something else that distinguishes you from the pack. I-20’s most interesting facet is his deep voice, and that only goes so far. In fact his vocal range is so far down in the concrete that the words start to blur together as you’re listening, with no emotions distinguishing one bar from the next. His flow starts to seem coldly robotic over time, just going through the motions from one song to the next. The only time he gets over is when the beat and the guests raise the bar of the song, such as the lead single “Fightin in the Club” featuring Chingy. I-20’s material doesn’t change, but at least it’s slightly fresher given the additional context:

“Fuck ya boy, hit somebody, swing until that nigga dead
Chingy make her chickenhead and tell that chick to give me head
You can die tonight dawg – get ’em peeled and roll on
Feezy where dem hoes at? Titty all the dro’ gone?
D my sister Shawnna man I hope Chi support her
You can tell my niece, Carma, I would die for her father
I-20 is the street nigga, better recognize bitch
We ain’t gotta go outside, we can do it in the filth”

Listening to this album really makes one realize Shawnna is the breakout star of D.T.P. Even though she’s using sex as part of her sales pitch like most female stars who break out of a male rap group do, she’s got an attention grabbing voice that’s paired with good breath control and a charismatic delivery. When she says something clever it’s easy to notice, but if I-20 ever did drop a gem in his rhymes the listener would probably miss it completely. Beats are the only place this album can find any saving grace, and sampling can be thanked for most of that success. The underrated Salaam Remi hits hard on “The Realist,” but that’s thanks in part to a “Let Your Hair Down” sample most hip-hop heads should already recognize. Ski hooks him up on “May Sound Crazy,” but the fabulous Dramatics and their “In the Rain” composition deserve credit too. Even the Three 6 Mafia is lifting loops on “Hennessey & Hydro” from “Let Me Love You,” and the groove rips so you can’t hate. Even Run-D.M.C. are sampled for “Point ‘Em Out” featuring Juvenile, another nice Salaam Remi track which also features the fastest flowing I-20 rap of the album. I-20 relies heavily on his outside help – Butch Cassidy on “Backstage,” Bone Crusher on “Break Bread,” Shawnna on “Slow Fuckin” and Devin the Dude on “Hey Shawty” among others. How did he get hooked up with so many quality producers and guests? That’s right. It’s not about WHAT you know, but WHO you know. Even if I-20 doesn’t know them personally, he’s down with Ludacris, and as one of rap’s top stars today Luda has more connections than Amtrak. I-20 should thank his lucky stars for that. “Self Explanatory” is an entertaining album in some respects, but that’s largely to do with everyone BUT the alleged star of this release. Junior M.A.F.I.A. had to stop after Kim and Cease because the well for solo artists out the clique had run dry. It looks like D.T.P. may be tapped out too.