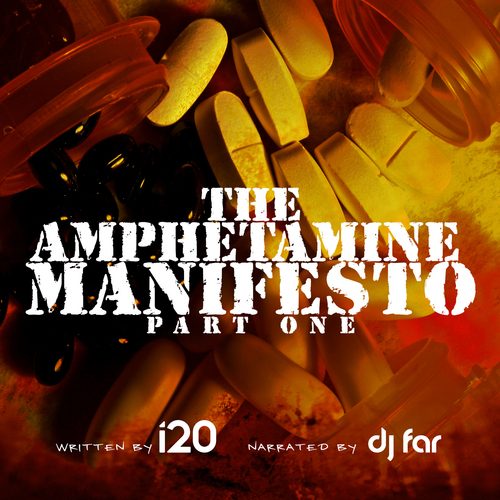 I-20 :: The Amphetamine Manifesto: Part One

What’s in a name? Well, it’s really hard to say when you think about it. Back in 2000, Ludacris released his major label debut album, “Back For The First Time” with a handful of guest appearances. One of those guests was none other than the Infamous 2-0. By the time Disturbing Tha Peace’s compilation album, “Golden Grain” hit record shelves, Infamous had shortened his name to I-20 to coincide with the name of the interstate highway that runs through several cities and states in the south, including his hometown of Decatur, Georgia. It’s also interesting to note that there was another artist who would change his name many years later who was also part of the crew. Tity Boi, who switched his name after many years to 2 Chainz, inexplicably became the #2 Hottest MC in the Game…at least according to MTV. Go figure.

Back then, it was Shawnna and I-20, along with Chingy, leading the charge as DTP’s second-in-command. Chingy had a couple of popular singles and Shawnna had a minor hit with the Missy Elliott-assisted “Shake Dat Shit.” I-20 made a name for himself with his memorable verse on Ludacris’ “Move Bitch.” The table was set for The Dealer to drop his debut album. Backed by the Lil Jon-produced “Break Bread” and “Fightin’ In The Club,” I-20’s “Self Explanatory” hit store shelves in October of 2004 and peaked at #42 on the Billboard Top 200. In 2005, I-20 found himself playing a small role in the film Hustle & Flow alongside Ludacris and Terrence Howard. A follow up to “Self Explanatory” entitled “Blood In The Water” was announced many years ago but has yet to see the light of day. Never one to be deterred, I-20 constantly dropped mixtapes over the years, most recently his “Celebrity Rehab” series with long time collaborator DJ Pain 1.

Tity Boi may have changed his name and gone on to do his own thing, but I-20 remains DTP to the core. A clever line from the first edition of “Celebrity Rehab” sums up 20’s relationship with Luda best: “I never burn Bridges, that’s why I’m still with Chris.” Luda’s birth name, of course, is Christopher Bridges. While Christopher Dorner is gone (maybe), I-20 is still in the game and he’s equipped with a manifesto of his own…”The Amphetamine Manifesto: Part One” to be exact. The project is hosted by DJ Far and features a lone guest appearance from former Bad Boy, Black Rob. Production is handled by the likes of DJ Pain 1, Dirty Dunnz, Trakksounds and Miles Sloan.

The Dealer opens his manifesto with the Trakksounds-produced “1 Deep” and the DJ Pain 1 laced “Certified.” On the former, 20 runs down a list of reasons why he prefers to do his dirt all by his lonely. Shady, flaky, backstabbing friends are some of the negative attributes he outlines here. The latter finds The Dealer delivering that raw uncut in lyrical form and otherwise. “Louie Luggage” is lush and luxurious as 20 talks his shit to the run-of-the-mill individual whose bragging about doing it big in Miami…as he toasts with the finest bitches in France and burns kush effortlessly. “I’m On” is 20’s declaration of just who he is in the rare event that you may have forgotten or are new to his music. He’s the man and if he feels like it, he’s leaving with your girl in a heartbeat. For the most part, the production here is laid back and soulful. One of the best examples of this is the jazzy Miles Sloan-produced “Supercool” that sounds like it has a bit of the recently departed Donald Byrd’s influence to it along with other samples. I-20 balances out the smoothness with his own aggressiveness, as he raps:

“Okay…I shoot to kill, I tote the steel
Had coke to deal, ’cause we sold for real
That candy paint, with that coke was sealed
With that +Candy Rain+, I’m So[ul] 4 Real
Go lick for lick and go brick for brick
I’ll break it up and I’ll take a cake
We’ll buy the bar, go shot for shot
Now that’s off the glass and I called the bank
I’m in a slab, I’m ridin’ slow
Got kush to blow and I’m sippin’ lean
I go for broke, ’cause each line is coke
This verse is dope with no triple beam
We in the skreets, we’ll take your ki’s
Won’t take a stand, but we’ll take your broad
I’m in the paint, I’m postin’ up
I’m on the block and I’m takin’ charge
Got a squad of goons, I’ll make the call
You make a move and I say the word
I’m in the A, I’m makin’ plays
Got work to fly, them dirty birds
I’m still street, they still creep
I stay wit heat and I keep a nine
I wham, bam and thank you ma’am
That pussy ham, but I don’t eat swine”

The aggression continues with the Black Rob-featuring “Say No More” and “You Didn’t Know.” The latter takes aim at all of the perpetrators out there. Whether it be in the drug game or the rap game, no one is safe and I-20 makes it known that he’s not here for the fake shit. A borrowed line from 2Pac’s alias Makaveli forms the hook for “Retribution” and the project comes to a close with “RIP.” Not to be confused with Young Jeezy’s “RIP” which features an appearance from 2 Chainz. At the end of the day, I-20 comes as advertised. From the jump you already know that you’ll be bombarded with punchlines and real metaphors, not the similes that rappers like to refer to as metaphors. “The Amphetamine Manifesto: Part One” is no different. Solid beats, solid lyrics and all for the convenient price of free ninety-nine. Even if you’re a casual user, a few tokes of this dope from the baritone-voiced DTP general may have you hooked and coming back for more. Proceed with caution.