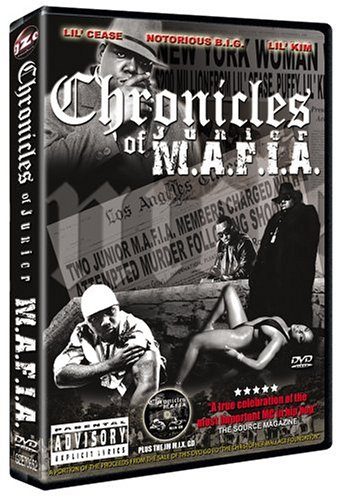 Most would agree that a group with one album to their name doesn’t deserve a DVD release. The average group with only one album, though, doesn’t have the controversial history to merit such a release. The Junior M.A.F.I.A. has been involved in plenty, from the tragic departure of their leader, Biggie, to an ugly dispute with former member Lil Kim. Cease-a-Leo’s close relationship to Big Poppa alone merits a DVD, and this collection proves that there’s plenty of rare footage to be scrounged up for the masses. My first reaction when receiving this to review, though, was that there must not be enough interesting material on the group to make for a good DVD. With B.I.G.’s face on the cover, the DVD and accompanying mixtape could be complete crap and it would still move units.

The DVD portion of this release is equal parts interesting story and shameless propaganda. The main feature is a documentary-style movie chronicling the M.A.F.I.A. from their inception to the present day, touching on the most important events throughout the history of the group. The interesting portions obviously involve the Notorious B.I.G., as he was the real star of the group’s fifteen minutes. There is an excellent bonus segment of video footage that Biggie took one night, and he provides amusing commentary while the camera’s running for a couple of minutes. Additionally, scattered throughout are various short clips of him in concert and home video. Since this is a Junior M.A.F.I.A. DVD, much of the focus falls on the ups and downs of the group, but the movie also takes significant time to describe the events surrounding the deaths of B.I.G. and 2Pac.

Cease-a-Leo was in the same building as 2Pac when the shooting that sparked the East-West beef occurred. His description of the event is detailed and breathtaking, and is easily the high point of the DVD. The section on Biggie’s death doesn’t provide many new insights, but is interesting nonetheless. In both of these cases, Cease’s words are especially inspiring because he was so close to the situations as they unraveled. He is the star of the film, as much of the running time is devoted to interviews with him.

The rest of the movie almost completely lacks focus, and interviews and clips seem to be thrown together without regard for continuity. Some of it is interesting, especially the bits about their early days, but for the most part, the sections with and about Biggie are the reason to see this DVD. A couple of sections are especially suspect. The chapter about Lil Kim’s departure is downright silly, and all of the members take pains to fit her into the villain role as departed member. The biases shown by the filmmakers in this section are quite disappointing. Also, there is a lengthy interview with Cease about P. Diddy, which is just an excuse for him to bad-mouth Puffy on camera while trying to play it off like he isn’t. Stuff like this is thrown in just for effect, and towards the end the Junior M.A.F.I.A. story turns into Cease’s personal diatribe against Puffy. He may be right, but I question its place in a “documentary” about the M.A.F.I.A.

This DVD offers a few surprises but is mostly forgettable. There are a few great bits that show Biggie as he hasn’t been seen before, but ultimately Cease and the crew’s ego trip gets old. The contractual struggles that they went through are sad, but ultimately inconsequential when surrounded with such sensational information regarding B.I.G. The contract issues they highlight are standard in hip-hop, and the majority of the material is dull in comparison to the B.I.G. subject matter.

The mixtape is a bit better, but still feels dated and unnecessary. There are a few hits, like the “Get Money” remix (you might recall how coldly Biggie rips it) and the “Whoa” remix, but the other selections leave something to be desired. Even “Whoa” is played out, despite the remix’s all-star cast. I was never a M.A.F.I.A. fan back in the day, so multiple songs with Bang, Klept and Cease are not terribly attractive. Cease’s single from his solo album “The Wonderful World of Cease A Leo” is included, but it isn’t terribly good. Those that remember it won’t need it, and those that don’t remember it won’t want it.

Biggie’s most devoted fans will want to pick this up. There’s enough material to warrant a purchase in those cases, and Cease’s rant about P. Diddy is a little amusing as well. Also, his account of the shooting that started the beef is mesmerizing. There are a few excellent clips showing Big Poppa recording in the studio that die-hards will need to get a hold of. It’s a Junior M.A.F.I.A. release, not a Notorious B.I.G. one, so don’t be disappointed when you have to sort through the other stuff to get to clips of B.I.G. and people talking about his legacy. Celebrate this release not for its production values, but for the few moments within that are timeless.