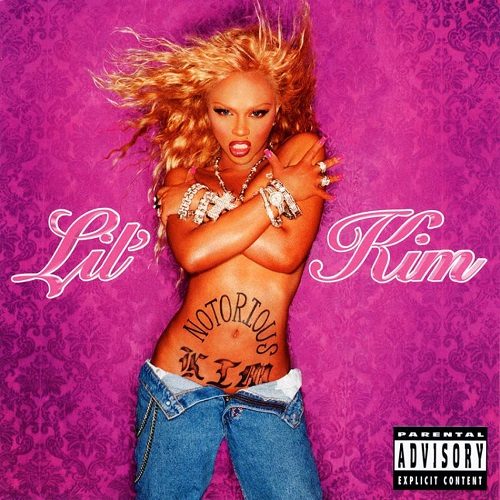 If she was a dude, she’d tell y’all to suck her dick.

The Queen Bitch is back. Years after “Hardcore” established her as the female torch-bearer for Notorious B.I.G.’s legacy, Kimberely has returned to show the world just how a REAL bitch flips the shit on the M-I-C.

Kim’s album revolves around sex the way Eminem revolves around random mayhem and violence – it is inspired by it but in no way OBLIGATED to follow it’s rules. You’ll get the idea on “Custom Made” when she says, “They call me Lil’ Kim, a.k.a. Cover Girl/ sometimes I feel like I’m from another fuckin world.” Fury from New Jeru Entertainment provides a beat based on little more than a woman’s orgasm that is so bouncy you’ll keep hitting repeat time after time.

Kim is just as likely to rap about busting gats and stacking cheddar as about getting her clit sucked. No, brothers don’t fuck her – she fucks THEM. So don’t be surprised when Mr. Thong Song himself shows up on the X-rated “How Many Licks” to give Kim some face. “Lick me right the first time or you gotta do it over/like it’s rehearsal for a Tootsie commercial,” raps Kim while Sisqo croons “How many licks does it take til you get to the center of the.. (OHH, OHH!)”

The first commercial single “No Matter What They Say” covers all the bases. Kim flips both an uptempo latin beat (sampled from Jose Feliciano) and a slower hip-hop groove where she pays homage to everyone from Rakim to Special Ed. Who said that Kim doesn’t take her hip-hop seriously? It’s all about the attitude though:

There are plenty of fly songs throughout. “Don’t Mess” has a snappy rock/hip-hop beat by Deric ‘D-Dot’ Angelettie wherein she threatens to “get on some Left Eye shit and start burnin up niggaz cribs.” The ultra-smooth Mario Winans produced “Aunt Dot” could pass for DJ Premier, and Kim proves herself worthy by kicking a storytale rap that would make Slick Rick and Kool G. Rap proud.

Kim’s sense of humor prevails throughout, even on the songs where the music fails her. “Suck My Dick” is an ideal example: the repetitive beat by RATED R & Mas will get old after just a couple plays but Kim’s rap makes all the difference: “Got the camcord layin’ in the drawer where he can’t see/ can’t wait to show my girls he sucked the piss out my pussy.” Say WORD!

Ultimately, it’s the inconsistency of the album that prevents Lil’ Kim’s sophomore release from being a classic, or even the fitting tribute to the memory of Biggie Smalls it could have been. Slamming songs are sandwiched around mediocre meat like “Single Black Female”, “Do What You Like” (the unimpressive contributions by Junior M.A.F.I.A. which prove why the rest her crew didn’t blow up) and “Queen Bitch Pt. 2” with a typically misguided rap by Puff Daddy. Much as you want to appreciate Lil’ Kim for being the ORIGINAL nasty chick (she even calls out Foxy Brown for biting on the title track) you can’t overlook the fact that at 18 tracks, this album is a little too long. Kim is not irrelevant in the 21st though – the talent she displays proves she’s more than a one-trick chick put on by Christopher Wallace.