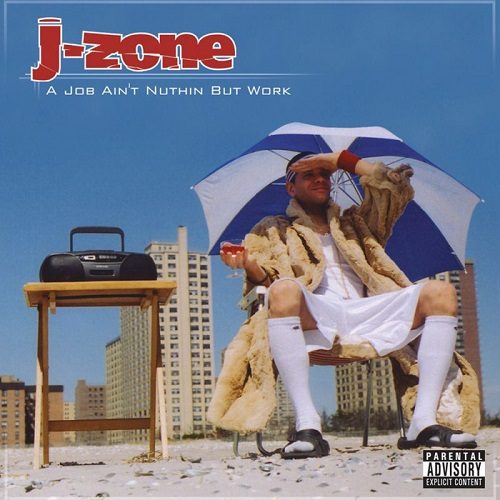 Somewhere between the pimp strut braggadocio of Too $hort, the self-deprecating, tongue-in-cheek hedonism of Devin the Dude, the exaggerated ghetto fab of Redman and the slapstick satire of Paul Barman resides a bizarre entity named J-Zone. Since the release of his timeless debut “Music for Tu Madre,” J-Zone has cemented a rabidly devout following with his impossibly irreverent, irrepressibly blunt sense of humour, presented in rap form atop rambunctious production that is equal parts G-funk, early Rap-A-Lot and late 90’s East Coast underground rap, all peppered with samples from his outrageously obscure record collection. In many senses, J-Zone is the ideal personification of rap’s bratty, outspoken spirit – he does not shroud his work with any of the self-righteous pseudo-intellectualism of his underground contemporaries, nor does he venture anywhere near political correctness, this is rap at its snottiest and most unrepentant, stripped of all subtlety and tact.

In truth there isn’t too much to say about this album, as Zone’s formula doesn’t allow for too much musical meandering or tangential experimentation- J-Zone belongs to a pantheon of artists who staunchly refuse to veer away from an established formula, file him with the aforementioned Too $hort, Devin, Redman and other similar-minded artists. If you’ve heard a J-Zone album before, I anticipate that you have already purchased this album or are making concrete plans to do so, funds permitting (Zone certainly understands your struggle), and have already formulated a definite picture of what this album sounds like. Predictably, J-Zone has no intentions to indulge in the avant-garde excursions of countless east coast peers – the album starts with the requisite misogynistic introduction, and moves into a typical Zone production (pulsating bass, thunderous drums with liberal synths) featuring Demi God’s own Celph Titled, complete with perhaps the greatest chorus we’ve heard all year:

“Throw eggs at your favourite emcee
Locate your face and then pee
If you don’t like it, you can hold these nuts
We put foes in their place and then leave”

J-Zone’s overwhelming affinity for hoops continues on “A Friendly Game of Basketball” as he calls out the likes of Master P, Kriss Kross, Kobe Bryant and Lil’ Bow Wow for obscuring the realms of rap and sport with their misguided attempts to dabble in both.

J-Zone’s lyrical focus continues to reflect the seedy underbelly of life in an urban metropolis, a reality far removed from the glamour and wanton indulgence of your average BET video- empty pockets, women who don’t brush their teeth or shower, rickety automobiles, unfortunate sexual escapades, et al. Instead of retracing a route tread by so many before him, J-Zone deconstructs popular myths about his hometown, New York City on the hilariously graphic “Bullshit City,” where he paints a sordid pastiche of disease-ridden baby mamas, trapdoor manholes and a state of unemployment so profound that Zone has to bring empty cans to the grocery store. Disarmingly earnest without being indulgent or whiney, Zone presents rap at its most profoundly human- look through all the dry, take-no-prisoners humour and you’ll discover the very premise of J-Zone’s appeal- perhaps more than any rapper not named Devin the Dude, you can relate to his pronouncedly imperfect life. There are no facades or pretensions here, no conjured images, smokescreens or fantastical images, you have witnessed and/or experienced everything on this record, it’s just that J-Zone can frame them with more matter-of-fact comic genius than you can. At the core of his over the top buffoonery, J-Zone’s rap is as caked with grime as Mobb Deep, he just doesn’t take himself as seriously, and we’re all the better for it.

I believe it would be prudent now to provide you with the foremost reason to purchase this record immediately- the realisation of a long-rumoured collaboration with Devin the Dude on “Greater Later.” Long an admirer of The Dude (in my mind one of the top 5 artists in rap today, period), J-Zone has finally actualised a dream that once existed only in the minds of rap nerds the world over. What a track- Devin’s impeccably syrupy voice and cadence meshes flawlessly with a classic J-Zone production, launching into a vintage The Dude tale of weed and a car that won’t start before Zone waxes poetic on his own tragic misadventures. What results is pure gold- a meeting between two of rap’s foremost anti-heroes, completely subverting rap’s contemporary fixation with material excess and wanton consumption with their tragicomic yarns.

Clearly, one should not approach this album expecting it to be a musical quantum leap from Zone’s previous material. This is J-Zone at his best- unapologetic, unerringly honest, digging deep into urban life’s cantankerous underbelly and unearthing the most putrid elements of our existence. He completely dislocates us from the bling and complacency, reminding us that life ain’t all peachy, but at least we can all sit together and laugh about it over great music. It’s a complete wonder to me why this guy is still underground, perhaps he’s a little TOO real for most of y’all cats. Another stunningly solid, gutchurningly real release from one of rap’s most listenable characters, an instant classic that certainly belongs in your collection.