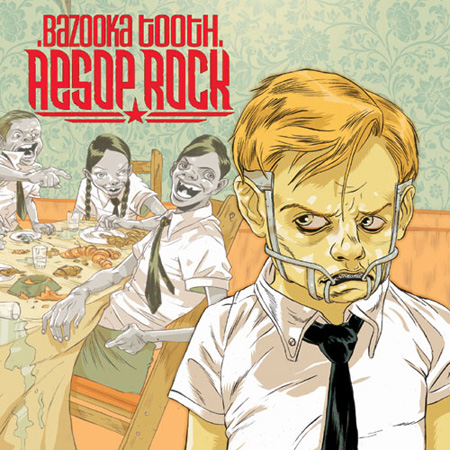 Remember Rubik’s Cubes? Most people would get pissed off and throw them against the wall before actually solving them. This is much like listening to Aesop Rock. Spitting mass blurbs of intricately complex lyrics too fast for any human brain to convert, many get flustered and annoyed by this MC’s extra-terrestrial style. However, you can’t deny the man’s talent with words and his vast knowledge of vocabulary. With his third full-length album, “Bazooka Tooth,” Mr. Rock comes with a complexity between Shakespeare and quantum physics. Sometimes he’s a poetic virtuoso at work, and other times he’s too much to comprehend.

Usually laced with Blockhead’s accessible, rich instrumentals, Aesop wanders alone into Beat Land and produces about ¾ of the album. What did he come out with? A handful of futuristic, eclectic beats, similar to fellow def jukie, EL-P’s, style. At first listen they sound almost as obscure as the lyrics he drops over them. However, after 4 or 5 listens, a method to the madness starts to form.

On the single “No Jumper Cables,” the beat slowly builds up until it lashes out with thumping drums over some wavy synthesizers. Aesop jabs in and out with his purposely-choppy delivery and drops lines like:

While the beat is somewhat difficult to grasp at first, it starts to grow on you and it’s hyper-energized vibe can get you started, jumper cables or no jumper cables. “Easy” sounds like C3PO at the disco, with the familiar synths that were found on “No Jumper Cables.” A mass of meshing, choppy, clanky sounds come together to create a fairly smooth, dare I say catchy, soundscape.

On “Limelighters” Aesop trades verses with Camp Lo over a banging beat that stamps this song with the seal of hotness. Camp Lo’s laid-back deliveries and smooth flows provide a nice break from Aesop’s rambunctious style. While there are definitely some dope songs to jump this album off, by the time you get to “Freeze,” at about halftime, the similar, but re-worked sounds in the instrumentals and Aesop’s somewhat monotonous, lethargic delivery start bog down tracks like these. So what’s he do? He brings in some old pals from the Def Jux roster to add some different flavors.

On “We’re Famous,” EL-P comes ranting with the obscure style that made obscure styles work and pave the way for people like our featured artist. He drops a mix of knowledge and bombs in this snippet of a verse:

“Back when the independent scene remained faceless
We were the only crew who promised your ass we’d take it
Mold it, shape it, living outside the matrix
Hold it, make it, more than miniature major labels
Hold it sacred, living it for the culture
Told ya plainly, protected it from the vultures
That’s why I always get respect from true soldiers
While half of the critics claim it every year: ‘Hip-Hop’s over.’
FUCK YOU, hip hop just started
It’s funny how the most nostalgic cats are the ones who were never part of it”

Damn! That’s how it’s done, straight to the point. However, this is where Aesop has a few flaws exposed as perhaps being a little too over the top, as he comes in right after EL-P with this:

There’s just too much going on. Whatever point he’s trying to make is lost among the abundance to references to unrelated things.

Blockhead is back in action with the voice-samples and strings on “11:35” where Aesop trades story-telling verses Mr. Lif. Luckily for us, Aesop decides to tone it down with the abstract lyrics to tell clear, vivid stories as him and Lif narrate the song with perfect chemistry. Each verse encapsulates something that happened on November 21st at 11:35 PM. The characters seem to get caught in some odd juxtapositions. Like a child molester getting raped in prison and another man in prison for weed getting released with his boys offering him a joint. This is definitely one of the best tracks on the album.

In the end this record definitely has its moments, producing several bangers and a totally different sound from what we’ve come to expect from Aesop. But there are times when his somewhat monotonous delivery drags on and on and the wording he puts out just wears on your mental stamina. It’s mood music, something you take in doses. If you’re in that loony, hyper mood or just an experimental, open-minded mood, then this could be the perfect album. And maybe if you’re feeling extra-intelligent, you make progress on this Rubick’s Cube. But if you’re just looking to chill and let the music talk to you, then you might have trouble carrying on a conversation with this one.