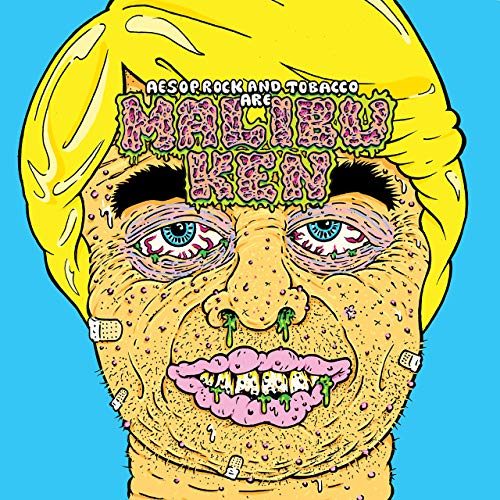 Aesop Rock should be a role model for anyone looking to having a sustained artistic career. He got his start in the 1990s as part of a wave of underground indie rappers who combined classic hip-hop with an experimental bent. As part of the Def Jux roster, Aesop Rock helped to forge a path for hip-hop that provided an alternative to the crass materialism of mainstream rap. He’s still putting out solid solo records, but he’s also found success in doing collaborations with other artists. He’s put out two albums with Rob Sonic and DJ Big Whiz as Hail Mary Mallon, an album with folk singer Kimya Dawson as The Uncluded, and an EP with Homeboy Sandman. That’s not even counting his work as a producer and creating movie soundtracks. Now he’s released an album with electronic musician TOBACCO as Malibu Ken.

Aesop Rock is still a challenging listen. He raps like he is perpetually holding in weed smoke. His rhymes are dense and delivered rapid-fire, and the effect is like listening to someone rap in a language you took a semester of in high school and got a B. Don’t expect to untangle all of his rhymes on the first (or second, or fifth) listen. None of this is meant as a knock on him; part of his longevity is his inscrutability. He is an artist you are always trying to figure out and unpack. His rhymes continually offer something new to discover, even after multiple listens.

He drops some doozies on “Malibu Ken.” There’s “Churro,” the song about the eagle population in Pennsylvania coming back from extinction (the title comes from the line “Sometimes a bird will eat a cat like a f#%$ing churro”). There are numerous references to the existential dread of these apocalyptic times (“1+1=13,” “Save Our Ship”), and songs about…well, I haven’t quite figured most of them out yet. What are you to make with lines like “Pick a booker with a basic evolutionary failure/I do not open mail, I do not answer phones/The fridge is pretty much a home for mayonnaise alone”?

Tobacco’s analog synths are a nice companion to Aesop Rock’s intricate rhymes. The music is playful and melodic, which helps moderate the relentlessness of Aesop’s delivery. At the same time, the intensity and dexterity of the rhymes prevent the retro sounds from coming off as precious or cutesy. TOBACCO’s production is less ominous and noisy compared to the work Aesop Rock has done on his last two albums. The downside is that it doesn’t always pack the same punch that Aesop’s solo records do. Also, while there are a few tracks that take left turns, most of the album follows a similar template and sound palette, which leads to a sense of sameness for such a short album.

“Malibu Ken” is an Aesop Rock joint, which means it is worth listening to you until you decipher every pun and metaphor. If it feels less weighty and consequential compared to his solo albums, maybe that is point.