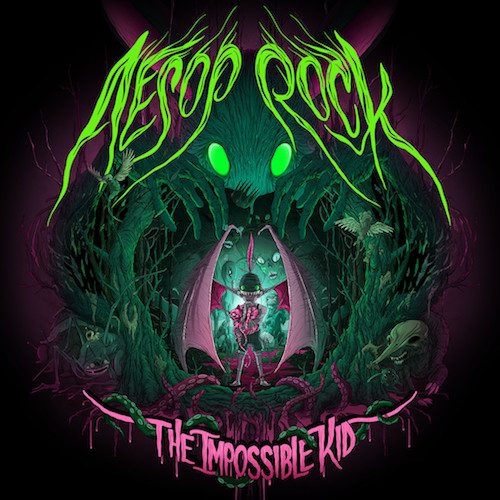 Complex, bizarre, and disjointed are words often associated with Aesop Rock. His lyrics and wordplay have been difficult to decipher, but meaning can still be derived from them. His 2001 track “Labor” became a rallying motivation when dealing with idiots and opposition in the workplace. Speaking of 2001, Aes’ first properly released album that year “Labor Days” dropped on the now defunct Definitive Jux label. Rather than wallow in his label woes Aesop quickly jumped over into the Rhymesayers camp. That was a good move since the Def Jux and Rhymesayers labels were closely knit and because of the level of artistic freedom provided by the latter. Case in point — on 2012’s “Skelethon” Aes handled all of the rapping AND the production. He does the same on his latest offering “The Impossible Kid”.

The Long Island native’s style is known for being littered with seemingly stream-of-consciousness wordplay laced with an abstract, hyper-intelligent b-boy aesthetic. His lyrics DO have meaning, but are formulated in such an abstract manner that each listener takes away something different. This seems to apply even in some of the rare instances in which the lyrics are ostensibly straight-forward. “The Impossible Kid” has several tracks of the kind and the underlying theme of it is isolation. Aes secluded himself in a barn out west and recorded most of this album while there. This isn’t a middle ground between his beloved NY and his adopted home of San Francisco, but rather it’s a move that seems pretty left-field even for a guy whose lyrics more-than-meet the criteria for such. I’ve heard of rock bands isolating themselves in unusual surroundings to gain the right mood and inspiration for their artistic endeavors, such as Nine Inch Nails recording one of their albums in the house where Sharon Tate was murdered. Aesop Rock made this album in a barn, which sounds like an insurmountable obstacle for a hip-hop artist. But the end result was an album that’s avant-garde in both lyrics and sound.

Lyrically, Aesop conveys several relatable experiences, as though all the time he spent alone during the album’s production gave way to clear-cut reflections about himself as an artist and as a person. Take the first single, “Rings”. On it, Aes paints a lyrical lamentation for his waned hobby of drawing and painting over heavy drums and synths. In it, he speaks of how he once aspired to be a visual artist until the hip-hop bug got in him, and now he wonders “what if?” The connotation this listener gets from it is the title of that 3rd Bass song “Portrait of the Artist as a Hood”. “Lotta Years” clocks out at under two minutes and consists of two first-person narratives from Aes about his marvel and brief insecurities about how today’s youth are bolder and more capable than he ever was at that age. His own genre isn’t exempt from his analyses either. On “Dorks”, he puts the present-day state of hip-hop under a microscope, picking apart the sense of entitlement and the monumental displays of ego from its artists. Fitting with the isolationist theme, Aes ends each verse on the song with variants of the line, “Party over here, I’ll be over there”:

The middle of the album contains songs that are accessible even when metaphorical messages in abstract form are embedded. Three of the songs in that portion are shout-outs of sorts. On the song “Kirby”, there’s a sing-along hook with the whole song being a tribute to his pet cat of the same name. That song ties in to previous tracks concerning depression and a valid skepticism about psychiatry. Built around a guitar riff, “Get Out of the Car” has Aes processing grief over the years and then seeking help in the form of “Shrunk”, a scathing indictment on the field of psychiatry based on his own experience as a patient. Over gritty drums and a menacing synth backdrop, the only positive take-away from it was obtaining a cat named “Kirby”.

Though Aes has given listeners glimpses into his upbringing, the closest to home he’s come has been when talking about his rebellion against growing up in a religious household. On the third aforementioned shout-out “Blood Sandwich”, he sends love to his two brothers in the form of youthful narratives. His separation from urban landscapes has had the effect of distancing himself from the two individuals he feels responsible for shaping him. The first verse about his younger brother contains elements of black comedy, but with an underlying message while the second verse captures his older brother’s youthful teenage rebellion in a Christian home. The beat, much like the stories, is reminiscent of “Ruby ’81”,:

The last third of the album continues the theme of seclusion, with nomadic topics and non-conformism thrown in. The album closer, “Molecules” follows the former and while “TUFF” embodies the latter. Aes has gone through plenty since his last solo release 4 years ago and the last 10 years in general. He’s pushed the pain of his divorce from his wife, the death of his friend Camu Tao, the shutting down of his former label, and the overactive imagination resulting from self-imposed exile into a hip-hop mosaic. Aesop Rock will be 40 years old this year and has been in the rap game for almost half of that amount of time. He’s got the sound of a man who now understands his lifelong abstract leanings. He’s no longer the kid from L.I. who goes to NYC to write graffiti and compete in blunted ciphers. He’s an emcee who continues to utilize his imagination to its utmost, creating cinematic narratives that capture topics and emotional themes that hip-hop mostly doesn’t touch upon.

Throughout “The Impossible Kid”, Aes’ production was certainly impressive considering his deliberately limited means on this outing. It has the avant-garde electro-funk of his Def Jux days and his lyrical topics are unconventional, but true-to-life. Whether he raps about his pet cat, family, kids half his age with cool tattoos, or insecurities, it just shows that you can rap about ANYTHING. Hip-Hop is mostly a testosterone-driven youth culture, but it has shown that subject matter and the way it’s delivered are limitless. And while Aesop Rock may not be every hip-hop fan’s cup of tea, you must respect the man’s grind. All-in-all “The Impossible Kid” is like (yet unlike) any Aesop Rock release: Ill underground beats and a lyrical prowess that yields rewards with each willing listen.