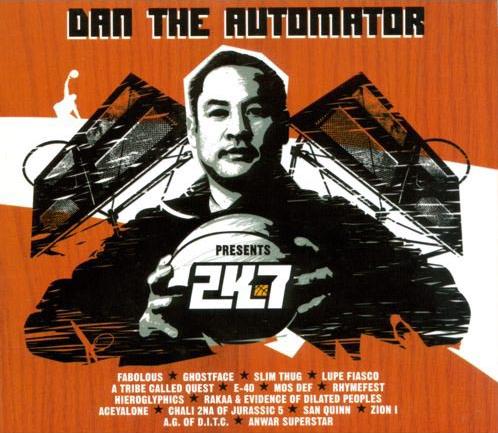 I was gonna say that “Dan the Automator Presents 2K7” is the most thoroughly b-ball-related rap album since the “Soul in the Hole” soundtrack, but apparently there’s already been “2K6” to support 2K Sports’ video game of the same name. While ‘NBA 2K7’ will be available on November 3rd, Decon Media has already released the accompanying audio CD, which features a variety of high profile guests and is entirely produced by Dan the Automator. Known for his involvement in forward-thinking projects such as Dr. Octagon, Deltron 3030, Handsome Boy Modeling School, Lovage and Gorillaz, The Automator takes it back to the basics with this one.

Beatwise, “2K7” goes hard in the paint with distinctly physical beats, Dan erecting elaborate drum structures and fleshing them out with rhythmic guitar riffs, dashes of pianos, horns and mucho bass. On the album’s most engaging track, Rhymefest gets to rap over a barging beat that easily evokes a powerful offense ready to take it to the hole, the Chicago MC boasting in the hook, “I ain’t never in a slump / I ain’t never been a punk / when I dunk I bang the ball.” The bass bounces with steady precision on “Champions” as Aceyalone and Rakaa Iriscience pass each other the ball:

“Other squads are known for weak d and bad shots
The only animal on their whole team’s a mascot
Basketball Throwdown, it’s classic live
Wild Style, Cold Crush, Fantastic Five
(…)
There can only be one king
and everybody thinks that their little crew run things
but at this level we do it for one thing
and willin’ to trade it all for just one ring
Yeah, like the motto – I love this game
I love the trifecta, I love this lane
I’m from no gang but in the paint I bang
(…)
That drive, that passion
that crash into the boards, start the trashin’ and laughin’
I’m old fashioned, nothin’ you could imagine
It’s give and go, give and take but I’ma take the last one
(…)
Haters either learn or get burned
Keep it ‘in the frigerator,’ rest in peace to Chick Hearn
Since he been gone it ain’t the same, face it
Where I come from we’re born with game faces”

Houston’s Slim Thug confirms that he, too, loves this game, with the safely-titled “I Love This Game.” Dan brings out the stadium rock guitars, but only so much as to add some well-timed drive to the relentlessly dribbling drums. Meanwhile, Thugga throws in the typical references to b-ball found in countless rap songs: “I’m a player, at the same time I’m the coach / when it’s a problem I’m the one the whole team approach / In a clutch Slim Thug the go-to man / when it ain’t lookin’ right they put it in my hand.” Neither are Hieroglyphics veterans Casual, Del and A-Plus out-of-bounds with the late ’80s-styled “Don’t Hate the Player,” which is jeopardized by Del’s lazy adlibing and saved by Casual’s gaming antics (“My crossover sicker than the Black Eyed Peas (…) [fuck] yo couch, leavin’ croutons all on your futon”).

San Quinn and E-40 are clad in throwback jerseys as well, feeling right at home in “Baller Blockin'”‘s mid-’80s set-up echoing with hollow drums and steel stabs. Fabolous is another baller you get to witness in slow motion, his languid flow gliding across a polished yet solid track on “Ball Till You Fall.” “Beg your pardon, I should live at the Garden,” Fab quips, scoring steadily with safe shots like “I’m for the green, somethin’ like a Celtics fan,” “Good on the first three, I’m Kobe on his fourth one” and “They want me to dunk on ’em just to get them some attention.”

“Me and Ghost is like Kobe and Shaq in ’01” claims DITC’s Andre the Giant on “2K007,” whereas Ghostface sums up the selfish tendencies of star players when he raps, “Starks on my jersey / one-man team, I swear the NBA so worthy / I could easily hall-of-fame, break all records / alley-hoop to myself with three points in last seconds.” Lupe Fiasco and Evidence interlock in wordplay on the rigorously thumping “Catch Me,” while a mildly enthusiastic Mos Def and an eager Anwar Superstar grace the routinely anthemic “Here Comes the Champ.” The soft-spoken Zion I (like Ace and Hiero coming back for seconds after “2K6”) finally has to tie his shoelaces extra tight for the game’s decisive minutes, the booming “Fade Away.”

From the sneaker soles squeaking on the hardwood in the “Intro” to the backboard-shattering “Fade Away,” “2K7” is an apt musical reflection of basketball, the intensity and the drama of the game. Lyrically, the players don’t bring exactly their A game (disregarding the unusually conservative censoring), and frankly most are put to shame by an unexpected (and highly recommendable) remix of A Tribe Called Quest’s “Lyrics to Go” that features flows superior to most heard here. The one who just won’t fumble is Dan the Automator, who proves that he may be an adventurer used to traveling to adjacent fields of music, but that first and foremost he is a masterful hip-hop producer. And about the only guy able to coach such a motley crew consisting of characters as diverse as Slim Thug, Ghostface, Aceyalone, Fabolous and E-40.

Maybe it should be acknowledged that this is one album where it’s all about expression, style, attitude – and making sure to be on the winning team. Maybe Slim Thug says all there is to be said about such a controversial and hip-hop-relevant issue like the NBA dress code issued in 2005 when he says, “Kids say I’m the man, thugs love my style / I keep it street with the braids and the diamond smile.” Maybe the league needs to realize for good what these players mean to the kids (just like the players should acknowledge the responsibility that comes with stardom). Formative college teams notwithstanding, the NBA still recruits many of its players from places where “either you’re slingin’ crack rock or you got a wicked jump shot,” or where you try your luck in the rap game. As Rhymefest sums up Biggie’s 1994 overview of career options – “It’s all hood.” Or as the Phoenix Suns’ Raja Bell was quoted as saying when asked about the ‘business casual’ dress code: “I understand they’re making it out to make us look better to corporate and big business. But we don’t really sell to big business. We sell to kids and people who are into the NBA/hip-hop world. They may be marketing to the wrong people with this.” In that regard, the people involved in ‘NBA 2K7’ are definitely marketing to the right people.