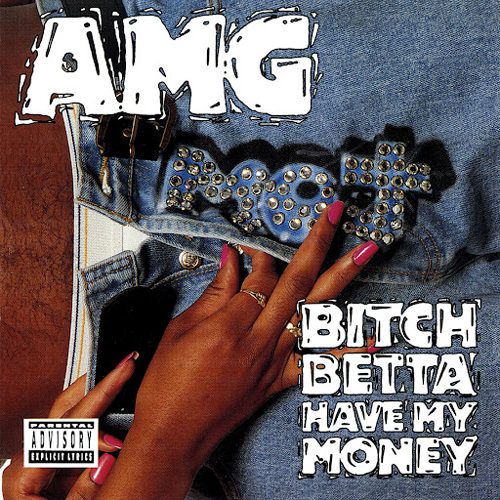 AMG :: Bitch Betta Have My Money

A Million Girls. A Mack Gangsta. Absolutely Marvelous Game. Any of these could apply to the sly and high pitched voice of rapper AMG, but if he picked any of them personally it would probably be the first. Just as 2 Live Crew’s reign as the kings of sexually frank rap was starting to peak and fade in 1991, AMG picked up the torch and ran with it. To be fair Oakland rapper Too $hort had already made a name for himself with “Freaky Tales” and other sex rap odes, while Compton native DJ Quik was certainly notorious for his love of “Sweet Black Pussy.” When AMG came along though, he didn’t follow in the footsteps of fellow West coast compatriots and try to make an album with other subjects. AMG’s “Bitch Betta Have My Money” was from start to finish nearly one hour of pure unadulterated sex of every size shape and style. The album’s name was most likely chosen for the popularity of it’s lead single. A pounding passline, punchy pianos, ripping rock and slamming drums made for an instrumental so hard that even a weak rap would have passed, but “Bitch Betta Have My Money” was so provocative and funny it was a guaranteed hit. Was AMG pimping hoes to collect that dough? Hell no. AMG was selling himself TO hoes:

“It ain’t nothin like black pussy on my dick
Word to the motherfuckin DJ Quik
I play hoes like dominoes, slappin bones
AMG’s on the motherfuckin microphone
I slang dick bitch, nuttin more and nuttin less
You got a C-note hoe? You can take the test
And bring big fat titties and lots of back
You got the woody, and I got the axe
I’m no joke when I stroke for a client
Bitches need dick, so they buyin it
G with the high top fade
Open up ya coach bag; bitch, so I can get paid
And take off your G-string drawers
Bitch eat your Wheaties, cause I don’t pause
What are you laughing at? Ain’t a damn thing funny
(Bitch betta have my money!)”

The hook and the punchline that ends this verse both have the same source – a sample lifted from the outro to Big Daddy Kane’s “Pimpin’ Ain’t Easy.” Appropriate, wouldn’t you say? AMG’s style was clearly to revel in raunchy debauchery, but instead of just spitting blue words and giving listeners blue balls aurally, AMG used his bravado to flip tales that were as humerous as letters to Playboy. Whether you believed every bit of “Word 2 Tha D” or not didn’t really matter, because with a slap funk track as slick as vaseline and the breath control of a mic pro, AMG was more than good to go:

“AMG, comin like a motherfuckin nut
Hoes with the big butts, I bust big guts
Pussy, sit it on my dick and I’ll be fuckin it
Always there’s a smile on my face cause I be lovin it
I do damage to a red-bone
A light skinned freak, for gettin my bed on
And I play these hoes like a trumpet
Bend ’em up and bump it, but see I’m leavin ya
Cause that’s how the game goes
Off comes your clothes, I’ll pull out the rubber hose
And stick it in your mouth it’s kinda funny
(Life ain’t nothin but bitches and money)”

This time the sample is a classic Ice Cube line from N.W.A’s “Gangsta Gangsta,” but don’t get it twisted. If you were under the impression AMG relies on lines from other rappers to be dapper, “Jiggable Pie” should prove otherwise. And what praytell is “Jiggable Pie?” It’s the same thing Leaders of the New School once coined “Feminine Fatt,” and that looks so good in them “Daisy Dukes.” If that doesn’t make it clear enough, let AMG himself break it down for ya:

“Crack kills, but not this kind
I try to get ahead when I get behind
I wish I was a pair of panties full grown
So when you put ’em on, I could be home sweet home
And if you got a weave it don’t matter
Dump the chitter-chatter, I wanna get it on
You know like give a dog a bone and I’m the K-9
A big black Rin-Tin-Tin with a grin
So let me get a sip of this Nighttrain
So we can do the right thang
And be just like Redhead, ‘Pump it Hottie’
But let me feel your body (WHY?) for the jiggable pie”

AMG’s “Bitch Betta Have My Money” is on the whole a lighthearted romp through a wonderland of sex tales. While he never achieved the infamy of 2 Live Crew or had the lengthy successful career of DJ Quik (whom he remains friends with and has done cameos for on the majority of his albums), AMG does deserve to be recognized for his progressive approach to a subject that far too many people pretend to have puritanical values about. The shit is just plain good anyway. “P-Funk” is a hilariously irreverant track where hip-hop gets smoothed out on a POLKA tip. “Mai Sista Izza Bitch” is a hardcore duet with rap gangstress Boss, who like AMG is still around today even if little recognized. “Lick ‘Em Low Lover” gave it up to going down over half a decade before Big Pun said if girls were good he’d put away the wood and give ’em the mustache. Even Kanye West and his “Workout Plan” would have to be envious of the “Nu Exasize” regimen AMG was on. With a solid, largely self-produced album of debauchery, AMG’s “Bitch Betta Have My Money” seemed to herald the coming (no pun intended) of a new rap star. It didn’t quite work out that way, but you can still enjoy the pleasure of his album today regardless.