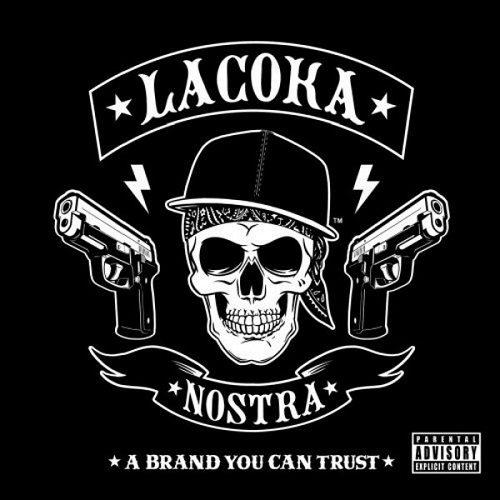 La Coka Nostra :: A Brand You Can Trust

Imagine two 18-wheeler big rigs named House of Pain and Non Phixion barreling down a one lane highway towards each other at over 90 miles per hour, each hauling a heavy load of concrete barriers. The inevitable collision to come will fuse the two separate vehicles into a twisted heap of metal with rock flying everywhere, creating a noise that can be heard for miles and miles. Some parts of the original vehicles will still be identifiable once the smoke clears, but even the jaws of life could not pull the newly formed merger apart. Observers on the scene note a brutal beauty in the carnage, amazed by how the collision created post-modern art for a post-apocalyptic nightmare, unable to tear their eyes away.

Now imagine La Coka Nostra, a musical clique that was itself an accident, the brainchild of former House of Pain rapper Danny Boy. Originally just a group of likeminded hip-hop artists who put a few songs on MySpace for a lark, the crew became more serious thanks to the positive reception their songs received. 70,000 friends and a free digital album later, it was time to take things to the next level. “A Brand You Can Trust” is their first official album in four years, but the album’s title is a tip of the hat to the fact this crew has thus far exceeded all expectations.

La Coka Nostra’s lineup is Everlast, DJ Lethal, Danny Boy, Ill Bill and Slaine. It’s evident this collision left a lot more of House of Pain intact, but Slaine is already familiar with all-star groups after his time in Special Teamz and serves as an acceptable substitution for Goretex or Sabac Red if you want to keep the theme. In fact when listening to “A Brand You Can Trust,” the musical collision analogy survives since La Coka has the sound of a spiritual successor to the now defunct Non Phixion. Their logo symbolizes their unapologetic stance – a skull wearing a Yankees cap, two guns up as though the armless wonder Homestar Runner was trying to blow your brains out; the music makes that evident right from track one on “Bloody Sunday.” There aren’t individual production credits on this promo copy but the one-sheet that accompanied it says Lethal produced the majority of the album, so if true give the devil his due for heavy metal hip-hop that could easily have been ripped from “The Future Is Now.”

“We’re all clinically depressed, they got us all manic
We keep swallowin they pills so we don’t fuckin panic
Run for the hills! Grab your automatic!
Bring your big black boots, and your fightin gloves
Psycho Realm’s in the house screamin out – FUCK LOVE!
Sickside’s in the house screamin out – FUCK LOVE!
[…]
Punk I’ll take your pistol, give it back and then
You act up again you gettin clapped my friend!
This Coka familiar vibe alone’ll kill ya
King Kong ain’t got shit on this here gorilla
Classic +Off the Wall+ like Mike with +Thriller+
A monster and a legend, hail this Godzilla”

Menacing piano notes squeeze into the breakdown wherever they can, but the crunchy guitars and wailing background sounds dominate the landscape, particularly when Sen Dog cameos on the chorus promising to open the gates to Hell. Speaking of guest appearances, the Coka familia had no trouble pulling some big names to get down with their drug-laced, adrenaline fueled sound. Bun B from UGK drops in over a sung arab backdrop to make you “Choose Your Side,” vowing that he’s “slightly off-kilter (and) somewhat tuned out.” Snoop Dogg joins the insanity with his own brand of G shit on “Bang Bang,” a throwback to his earliest days when he says “They wanna take what you got/wanna blow up the spot/I don’t care if he’s a cop – you gots’ta bang bang!” Sick Jacken and B-Real hold it down on the album’s finale “Fuck Tony Montana,” but the best collaboration with this already large supergroup may be Q-Unique and Immortal Technique on the perhaps accurately described “spectacular terrorist event” of “Nuclear Medicinemen” – a darkly orgasmic dream for conspiracy theorists and William Cooper fans.

“This is the beginning of, theocratic civil war
Carving out the country’s stomach to eat the liver raw
The world is changin, atmosphere rearrangin
Religion corrupted the image that we were made in
America’s beauty is skin deep, I’m sorry to say
Like the portrait of Dorian Gray
You pray to God because of Pascal’s Wager, not for the savior
And not to correct your behavior”

Throughout the album La Coka Nostra take shots at the perceived mediocrity of hip-hop in 2009, declaring themselves “a real movement” while noting “you motherfuckers talk like you a movement, but none of youse are movin!” While their viewpoint is unapologetic and refreshing it can at times be overbearing. One advantage the darkly brutal worldview of Non Phixion had is that is was tempered by beats from the likes of DJ Premier, Necro and Large Professor, giving even their most hellish nightmares headbop. Tracks that break through like “Gun in Your Mouth” and “I’m an American” remind you of NP for all the right reasons, giving one reason to wonder if Lethal’s production scheme deserves the credit or not. Only the official release can clear this issue up. Speaking of Lethal, one of the advantages House of Pain had is that they remembered to temper their Irish pride and hip-hop machismo with a little fun, giving us all a chance to “Jump Around” and enjoy their “Shamrocks & Shenanigans.”

LCN may in fact live up to their promises to be bugged out, dark and loud but with the membership being 60% HOP it’s also borderline schizophrenic at times. Some listeners may just wish they had done a reunion album without Ill Bill and Slaine while others may feel the latter two would be better served with only one of the Pain’s crew. The concept is enjoyable though, the beats are largely on point, and the cameos give the concept of being angry simply for anger’s sake a well-needed break. There’s definitely brutal beauty in the worlds that have collided on La Coka Nostra’s “A Brand You Can Trust” but at present the title overstates their importance or impact. This massive unit needs more time to get their style and sound down.