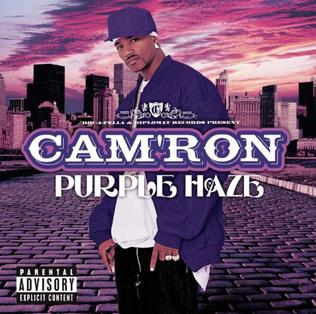 Cameron Giles, whether you like him or hate him, seems to have done a damn good job of establishing himself as heir to the Roc-A-Fella dynasty. The only thing that has kept him from taking the throne as his own is that the allegedly “retired” Jay-Z seems to keep releasing new albums, one with R. Kelly and another with Linkin Park. Despite that he has certainly usurped long-time Jigga associates Beanie Sigel (too busy with his legal problems) and Memphis Bleek (underground heavy, but not a huge commercial success) despite having only been an official member of the crew since “Come Home With Me.” Not one to waste the opportunity, Cam succeeded in finding a home for his crew ofDiplomats with his newfound fame and acclaim as a Roc artist. Cam’Ron is basically set now, because even if he did have a falling out with the Roc, the DipSet has a hardcore legion of East coast hip-hop fans on lock. With a roster of artists like Jim Jones and Juelz Santanaholding down the Diplomats sound, Cam doesn’t even need to be a star any more. He could easily chill and be “chairman of the board” or go into “retirement” like Jay-Z did himself.

Cam’Ron still feels motivated to keep recording and releasing his own music though regardless of all this success. As a result Roc-A-Fella and Diplomat Records proudly co-present “Purple Haze,” the fourth official solo album from Mr. Giles (we’re not counting bootlegs and street release mixtapes). You’re probably already up on the fact that the title is just one of a numerous amount of ways that rappers these days express their affection for marijuana. Whether it’s chocolate thai, green acres, blueberry yum yum or just that sticky icky icky, puffing it is going to put SOME sort of cloud in the air. Of course when Cam looks up from Harlem at the smoggy New York skyline, that’s just as likely to be a “purple haze” in it’s own right. Regardless of the name or the color, one can at least be thankful his DipSet doesn’t CLAIM a set like blue or red. Whether it’s the chronic crop or the Benjamin Franklins, Cam’Ron loves his greens like a dietician loves celery and lettuce. On songs like the Stay Getting produced “Bubble Music” he’s definitely out to make a come-up:

“Mami all on me cause I’m touchin her belly, I’m on butter Pirellis
Whip purple and yellow, hello, that’s butter and jelly
I flip butter on cellies all right in front of the deli
Holly Lily to Kelly, all spend ones on the telly
And I got hella gear, my earring my nice
The price? (What?) Three townhomes in Delaware
A tomato Porsche lookin like tomato sauce
Hip-Hop Hooray, I got to get that llello off
That’s blocks to the ave, cops come blockin the ave
I put the glock in the stash, slabs and tops in the trash
Still stop and I laugh, ma get them rocks in your ass
The rest, twat and your bag, dag – hop in a cab
Play youthful, what? You gon’ play yourself
Ain’t nobody gon’ pay you like you pay yourself”

That’s Cam’s basic steelo in a nutshell. He alternates between being a street drama narrator, a pharmaceutical entrepeneur, and a straight up hustler looking for bigger and better whips to floss and tits to grab. There’s nothing particularly profound or redeeming about it, but there’s also nothing overtly offensive about it either. Cam is not the funniest or most gifted rapper in the game, so he relies more on his smooth (almost monotone) vocals and calmly focused lyrical delivery to do the job for him. Provided the beats are tight he can pull it off most of the time, as he does on the Skitzo produced “Get ‘Em Girls”:

“I get the boosters boostin, I get computers ‘putin
Y’all get shot at, call me I do the shootin
I do the recruitin, I tutor the students
I nurture they brain, I’m movin the movement
Whether Buddhist or buddah, that’s judist or judah
I got luger to ruger, hit from rooter to tooter
Chick from hooter to hooter, I put two in producers
I’m the real ball story, the loser of hoosiers
I rock mostly dosey, I roll mostly doley
I’ll leave you holy holy, you’ll say ‘Holy moly!’ Here come the coroner get ’em, play rolly-poly
I tell you true stories, how I coldly hold heat”

Standout tracks include “More Gangsta Music” featuring Juelz Santana, the Chad Hamilton produced “Get Down” with a fly Marvin Gaye sample, “Down and Out” featuring Kanye West and Syleena Johnson, “Harlem Streets” is fly just for Ty-Tracks having the balls to loop “Hill Street Blues” as a rap song, the aptly named “Soap Opera” and “More Reasons” featuring Jaheim among others. For whatever reason Cam’s choice of beats comes correct and avoids the occasional tendency of the DipSet fam to rely too heavily on soul samples and sped-up R&B records. While Mr. Giles may never find himself at the top of the list for hip-hop quotables, he’s not really trying to be and he’s comfortable with playing his position, which clearly makes him as popular with his legions of fans as Jay-Z is with his; and that smooth delivery in his flow mixed with the right beats makes for a certain amount of crossover appeal. Therefore “Purple Haze” will certainly please both groups – the hardcore DipSet fans and the pop music crowd who know him best for tracks like “Let Me Know” and “Oh Boy.” Even those who are not the biggest fan of his work lyrically can respect the fact “Purple Haze” is a solid album from top to bottom, something a lot of more lyrical rappers can’t say themselves.