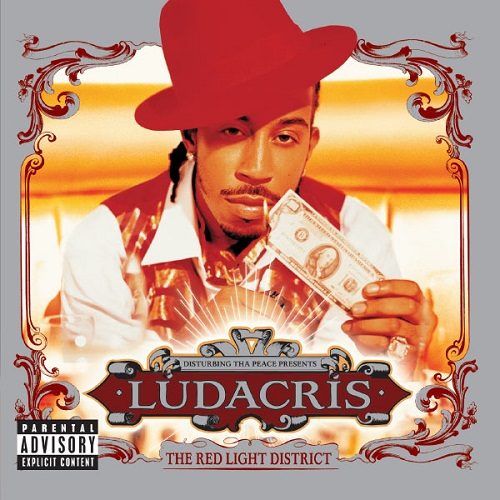 Who’s the best rapper out of the South? Ludacris? Scarface? Lil’ Flip? T.I.? No matter how few or how many names you put on the list, it’s ultimately a question as meaningless as “who’s the best rapper from New York” debates between Jay-Z, Biggie and Nas fans from time to time. The simple fact of having to ask the question to begin with reveals the fundamental truth that they’re ALL fresh, and that in any part of the country multiple talents will appear on the scene at the same time. While other people are caught up in the debate about who the hottest is from Hotlanta, Ludacris is chilling in “The Red Light District,” arguably the hottest place of all. At the very least, it’s the place where you’ll get burned if you don’t have some protection on you. What sort of protection is Mr. Ludacris packin’? Lyrical bravado and a FUCK YOU attitude, as evidenced on his “Intro”:

“Last album, they don’t like me to tell this
Debuted at #1 and sold more records than Elvis (shut up!)
That’s what they tellin me, switch up your melody
Through with misdemeanors, they tryin to give rappers felonies
So they can lock us up one at a time
But true writers stay FREE in e’ry one of our lines
And if you not feelin I’m the cream of the crop
I’ll KNOCK rappers off your list ’til I get to the top!”

Quiet as can possibly be kept when you sell as many millions of records as Ludacris does, he’s become a punchline king as well as one of the best lyric writers in hip-hop. You get the feeling listening to Luda rap that he could battle Eminem head to head, and if he didn’t win it would at least be a draw. For Luda though it’s hardly the point – his chief object most of the time is to just have some fun in the game. Even on the menacing Medicine Men produced lead single “Get Back,” Ludacris may be rapping with a hardcore attitude but he’s still having a good time:

“It’s the knick knack paddywhack, still ride in Cadillacs
Family off the street, made my homies put the baggies back
Still stackin plaques (yep!) Still action packed (yep!)
And dough, I keep it flippin like acrobats
That’s why I pack a mac, that’ll crack ’em back
Cause on my waist there’s mo’ Heat than the Shaq Attack
But I ain’t speaking about ballin, ballin
Just thinking about brawlin till y’all start bawlin
We all in together now, birds of a feather now
Just bought a plane so we changin the weather now”

Typically Ludacris is a conniseur of the good things life has to offer in his music – fine spirits, fine foods, fine fashions and fine women. What would all of that be without a little fine bud? Well you may not be able to cop the herbals in your local neighborhood, but if you come down to “The Red Light District” Ludacris will point you in the direction of that “Blueberry Yum Yum,” with a little assitance from Organized Noise and Sleepy Brown:

And what would life be if you didn’t have a little bit of pocket ends to spend? They may light their blunts with Bennie Franks like Ludacris does on the cover of “The Red Light District,” but it’s just as likely they’re investing in stocks. Oh you didn’t know? Pimping ain’t easy, and if you don’t want to be on the ho stroll 24/7 you got to let your money MAKE money so you can stack “Large Amounts.” Even Vudu Spellz and Clive Reville (the former the producer and the latter the sample in the hook) know that if you don’t have enough to spend yourself, you certainly won’t have enough to share with OTHERS:

“Now everybody wants a piece of my pockets
And it don’t help when I’m screamin on these records that I’m rich
Callin people from my number, now I block it
Cause ain’t nothin worse than gettin haunted by a stalkin-ass bitch!
Oh yeah! Cause good game, I talk it
And yet you so true, some women’ll have you feelin blue like Crips
I lay my feet upon the path and I walk it
I spread my wealth out or someone close’ll have me layin in a ditch!”

Guests are plentiful, but not overwheling. DMX helps out with the hook on “Put Your Money,” as does Nate Dogg on “Child of the Night.” “Spur of the Moment” is made flyer by an appearance from DJ Quik, and Trick Daddy can be found pondering whether or not life is “Hopeless.” It’s certainly not when you’re hanging out in “The Red Light District.” Some people will look on it and all they’ll see is crime, violence, prostitution, drugs and more. Ludacris’ detractors should know better than that by now, because his fans certainly do. Even when he’s Disturbing Tha Peace, Ludacris is only making all that noise because he wants to have a good time, and being that loud is just a way to bring your attention to the party he’s having. So go on, lighten up for a minute, and swing through “The Red Light District.” It’s a nice place to visit AND you just might want to stay a while.