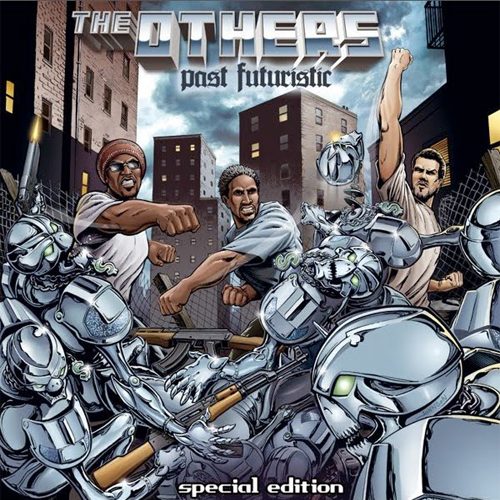 The Others :: Past Futuristic

It’s 2004 and the music world has been ransacked by corporate androids. Once brimming with life and soul, hip-hop music has become monotonous and lifeless at the hands of profit-driven record execs. In an attempt to separate themselves from what they call “crunk rap music” surrounding them – Johnny Madwreck (MC/producer), Mr. Mattic (MC), and DR (DJ/producer) combined their powers to form “The Others.” On a mission to bring that “good ole feel” back into hip-hop, this Charlotte, North Carolina-based trio composed their sophomore album “Past Futuristic” – a boom-bap frenzy of beats and rhymes. Will they succeed in bringing the music back to its roots and make it out alive?

On “Who We Be?” the Others introduce themselves alongside b-boy circle handclaps and plush trumpets, which eventually give way to an even funkier cascading drum roll. Get your linoleum mats out, because by the end of the song I was busting out a six-step, head-spin maneuver that I haven’t pulled off in years. Break-dancers and up-rockers at heart will love the rhythmic breakbeats on “Ready” and “It’s About Time,” as well as sultry sample-chopping that would make DJ Premier nod his head in appreciation.

Mellow flutes chirp on “Flippin Rhymes” as Madwreck, Mattic and guest artist Supastition reminisce on their childhood dreams of rocking the microphone: “Trapped in my bedroom for hours writing new shit down / parents beating on the wall like: â€˜Boy, turn that music down!'”

Things get smoother midway into the album. On “Reflect,” neo-soul vibraphones bubble over chants of “it’s-like-this-y’all, it’s-like-that-y’all,” and the ambient mood continues with the cosmic chimes on “The Opener’s Love Change” (think of Slum Village or Little Brother). As a matter of fact, a few of the closing beats resemble fellow North Kakalak producer 9th Wonder’s work — and that’s a helluva compliment for those of you out of the hip-hop loop. “Wreck Is The Concept” has a head-nodding yet mystical feel that it has to be heard to be believed.

Although much of the beats are remarkable, lyrically, you will find no hip-hop quotables nor monumental wordplay here. Instead, what you get is precise, back-and-forth coordination on the mic reminiscent to hip-hoppers Jurassic 5 and the now defunct Arsonists, but with an underlining smooth 1993 Souls of Mischief feel to it. Oftentimes the brilliant production outshines the MC’s yes-yes-y’all flows, but that’s not to say the Others aren’t spitting fire. Peep a verse from the melodic “Triumphant in the Sun”:

“I’m the type of MC that makes history
It was what it is to be: concrete
Far from obsolete when I freely speak
From the hip-hop synthesis, powered by the sun
Compelled to keep spitting every hour ’til I’m done
Then nighttime comes, time to catch a train
That travels through the wormholes, or should I say ‘veins’
Of the universe, infinite, never coming back
Till I reach my destination which is where I started, and that’s that”

The title “Past Futuristic” fits the album perfectly. The Others manage to shell out fresh, innovative music that at the same time evokes a nostalgic, old-school feel conjuring up the days when MC meant “move-the-crowd.” Will they succeed in toppling the corporate hegemony currently dominating hip-hop? That has yet to be seen, but I look forward to hearing more from these guys in the future.

The Others :: Past Futuristic
8Overall Score
Music8.5
Lyrics7