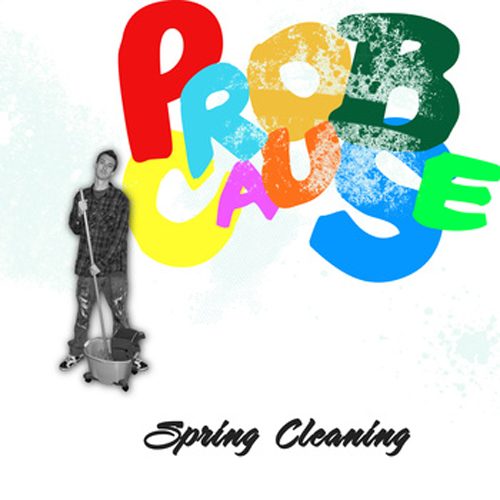 Judging others gets the best of you more often than not. Sure, occasionally one can predict the music on a CD simply by looking at the cover, but more often than not the cover art is deceiving. Yet, the cover art is many times the only thing a fan has to go off of. In ProbCause’s case his cover art shows a scrawny white kid with what could be a faux hawk holding a mop. Sure, it fits with the theme of the album, “Spring Cleaning,” but it doesn’t shed much light into the music. ProbCause’s bio does little to help. He’s a kid from Evanston, Illinois who claims he’s made an impact in the game through his creativity on the mic. It’s a claim a thousand other rappers have failed to live up to, so my hopes aren’t too high. Given Chicago is know for speed rap and conscious rap, I expect ProbCause is going to give us his take on conscious rap.

“I’d like to welcome ya’ll to what I’ve been on and up to
So let me get you caught up, give you something to bump to
You haven’t heard me lately, word up to those who hate me
But you can’t say my shit don’t knock up on your speakers, baby
…
So this one’s for the people, yes I’m just trying to feed you
Keep you occupied and locked inside until the sequel
So plug it in your ride, I can change your vibe
Like make your weed taste better with a different high, life
And I’m hoping that you hear me
Don’t hesitate to holler if you feel me”

While hard to convey in words, ProbCause’s stand out feature is a super smooth flow and perfectly timed delivery. The kid can deliver a verse almost effortlessly, flipping words and switching cadences in an impressive manner. ProbCause can also drop dope lyrics:

ProbCause’s cocky yet humble lyrics are the perfect compliment to his effortless delivery. ProbCause’s flow stays consistently fluid, even when his topic matter tends to be a bit eclectic on this album. He remakes Charles Hamilton’s only hit on “Chicago Girls” with good results. “Blog Rap” finds ProbCause detailing the changing landscape in the rap game, where internet buzz can be more valuable than a major label. “Saturday Morning” finds ProbCause comparing the good times in life to the feel good feelings one gets during just that time.

“Spring Cleaning” is a solid mixtape for a young rapper who has plenty of talent to make a dent in the game. Outside of a few borrowed beats, most of the songs are original production with Prob dropping his smooth, focused rhymes on the track. The name reflects the nature of this collection as this CD contains what feel like random odds and ends Prob Cause had lying around. The disjointed nature of the CD makes it even more impressive as Prob Cause’s leftovers are still head nodding. Overall, it’s an impressive CD that far exceeded all expectations I had when I first saw it. That said, while the mixtape is solid, a focused full length would really show whether or not Prob Cause can leave his mark on the game.