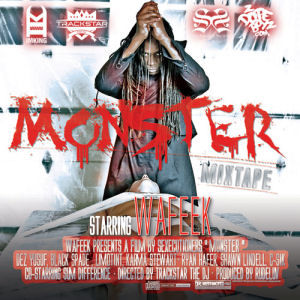 Last week a package from Trackstar the DJarrived at RR headquarters with more single sleeve mixtape CD’s inside than I can count on both hands and feet. At random I selected Wafeek’s “Monster Mixtape” from the pile and popped it into my PC to rip, and was surprised to see that iTunes immediately had a complete CDDB tracklisting for it. Perhaps I shouldn’t have been surprised – Trackstar’s hustle is as legit as they come and I’m sure he submitted identifiers for each mixtape he’s put out or been affiliated with. Interestingly enough this isn’t a mixtape you have to buy in stores, though there is an official “Monster

” release available from Amazon. If you click on the cover art here you’ll get a copy of Wafeek for free courtesy of several different sponsors including 2 Dope Boyz. Word.

Who is Wafeek though? Let’s refer to his official bio: “Wafeek can often be found sipping tea and grey goose in a porcelain teacup whilst contemplating the plights of this modern world. He tends to fiddle with his sometimes frizzy but mostly well kempt waist length dreads. When meetings commence, he’s been known to sprawl out in the middle of questionably stained carpets, blunt in hand, ready for the daily business banter. He’s what you could call a high functioning alcoholic. A mad man. An intellect. But primarily, Wafeek is a rapper. He exudes modesty and humility.” That’s playfully contradictory and coy, but it’s fair to say that most successful rappers are about as “modest” as Floyd Mayweather Jr., though there are exceptions. Since the bio seeks to intrigue readers by confusing them let’s get down to the brass tacks because there are only three things you need to know – he rapped as “Allah” until a friend told him that was blasphemous and offensive, he hails from St. Louis, and his producer’s name is Rudeluv. Got it? Good. Let’s see what he’s working with on the title track of both his mixtape and his commercial release:

“Everybody know that we the monsters, got ’em on the run
Feelin totally awesome, jammin on the one
I got my shine from my father, swagger of the son
Never mind them impostors, damn it I’m the one
I, slap her with a dick and bliiind a bitch
Before I put it up in yo’ vagiiina bitch
Please tell a nigga where the condom is
Keep quiet – you know we in my momma crib!
But they don’t hurr when I hit in the bathroom
I’m not right, I was raised on St. Andrew”

Despite throwing in the obligatory Lou’ pronunciation as mandated by every other successful artist from the region, he can’t be said to have the trademark country twang of a Chingy or a Nelly. In fact Wafeek sounds closer vocally and lyrically to Lil Wayne, though he references being “like Memphis Bleek […] one hit away” and there’s a bit of the underrated Roc rapper in his flow. Perhaps Weezy + Bleek could literally = Wa-Feek. It’s a good look either way because Wafeek’s flow sounds fairly polished for someone just now getting a look nationally. Many of the songs on the “Monster Mixtape” are snippets under a minute in length, but “Hush” is enough of a full dose to give us more insight into the rapper.

“It’s like tryin to sell weed in a room full of crackheads
This rap shit is doomed, it’s so sad but true
Stop rappin truth
All the yappin you and all these bastards do
is automatically some kind of whack disease, it’s rather tragic
Rappers, you’re too melodramatic
I’m a mellow dude, it’s just freaky
A fool with a message and a mean streak!
Fuck with me it’ll hurt
Gettin merked by a nerd in this medium shirt”

Wafeek seems to view himself as a post-modern rapper, somewhere ahead of the emotional outpourings of Kanye West and Kid Cudi, yet as willing to admit his otherwise geeky qualities as Asher Roth or Lupe Fiasco. In truth if he’s ahead it’s only by about two minutes, but these days being ahead at all is an achievement in itself. Wafeek’s Midwest meets East meets New Orleans style and swang allow him to get away with lines like “I rock a conflict diamond in my earlobe/I hear more evil” on “A Moment in Time” and not sound pretentious or phony. In fact on tracks like these he drifts ever closer to Black Thought without the severe sylla-BAL of the intellectu-AL flow that Thought possesses. It’s fair to say after listening to an hour of snippets, nearly full length songs and freestyles from Wafeek that I got lucky selecting this mixtape to listen to first. I need more full length music to really get a feel for ‘Feek but for free odds are you’ll enjoy his mixtape too.