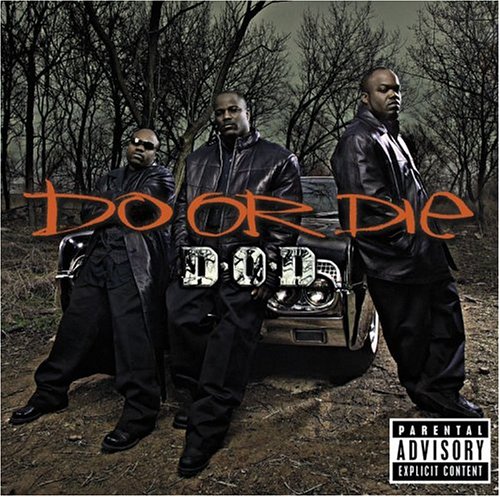 “Ay Max Julien here, a.k.a. Goldie. I’m a little pissed right now. To all you cockroaches and creatures out there, I’m gettin tired of people tellin me about somebody else did this or somebody else did this shit. Y’know I’ve been hearin from Snoop and Pimp and all these other people back there y’know, talkin about y’know Do Or Die started this whole pimp thing on their records man. They laid this shit out long time ago. It’s time for y’all to lay the credit out on the ground y’know, they the best around. I’m just pissed man. I’m just fuckin tired of hearin it, y’know. Come on y’all just, back up and give it up to ’em, okay?”

If Max Julien says it, then it must be true. After all who would question the credibility of the man who arguably portrayed the best pimp in the history of blaxploitation film, in the movie “The Mack”? And Mr. Julien is certainly right about one thing – Do Or Die did a lot to push pimpin’ on their records, dating all the way back to their 1996 national debut “Picture This.” The lead single and crossover smash on that album was “Po Pimp,” although at the time as a listener I felt it blew up mostly because of the beat, Johnny P’s crooning, and Twista’s phenomenal performance on the third verse. A.K., N.A.R.D. and Belo have never impressed me that much lyrically. While the group’s Chi-Town attitude and penchant for quick tongue dexterity flipping verbals has given them an identity to help set them apart from the rap pack as a whole, their success to date (at least in my eyes) has come largely from coming out each time with one or two hot singles on an album full of mostly uninteresting tracks.

To Do Or Die’s credit, this might be the first time in their history they’ve released an album that feels more like an excuse to put another single on the charts. Although for the first five tracks the album doesn’t gain much momentum things get hot once you reach “Higher,” produced by and featuring Kanye West. From that point on “D.O.D” strings together a whole bevy of bumping tracks: “Magic Chick” featuring R. Kelly, “Nawty” featuring Bounty Killer, “Paid the Price” featuring Kanye West, and “If You Only Knew” featuring Syleena Johnson and Twista. Not surprisingly though, all five of these songs have one important thing in common – big name guest stars. In fact you’ll find throughout “D.O.D” that all of their best songs include people other than the group’s main members. “Be Alright” features Ric Jilla and Johnny P. “Around Here” features Malik Yusef. “Church” features DJ Quik and Johnny P, et cetera, etc.

It’s rather perplexing to figure out what causes this to happen from one Do Or Die album to the next. At the end of the day, one can only draw one of these two conclusions: either Do Or Die have such mediocre pimp personalities they can’t turn in a top performance on their own (everyone from Snoop to Suga Free has them beat in spades), or they don’t really put in a top effort unless they’re pushed to by sharing studio time with a top star. Nothing has really changed for me with Do Or Die. I still find that they’re tolerable enough vocally, and pick more than your average amount of good beats, and on “D.O.D” in particular they’ve come through with a nicely bumpable album. Lyrically though, the trio just leaves me flat. You’ll notice in this review there are no lyric quotes from any individual members of the group, and that’s quite frankly because I just don’t find any of their verbiage to be either that clever or profound. It’s functional, and it keeps the songs flowing from verse to verse, so it’s still more than half the signed MC’s and 4/5ths of the unsigned MC’s of the world can do.

In short, Do Or Die’s “D.O.D” is good enough to be their best album to date, but it’s probably about as high as they’ll ever reach, since I doubt they can get that many hot beats and guest artists for EVERY album. One more thing – I’ll give them props for the bonus DVD with the “Higher” video – that’s a nice touch. “D.O.D.” doesn’t feel like a few singles strung together by a bunch of filler, which makes it an okay album, but the Chi has always had much better rappers than Do Or Die, and this album doesn’t change that fact. It’s coppable though, and you will want to listen to it more than once, though by the second or third listen you’ll be skipping the songs they do on their own. Trust me.