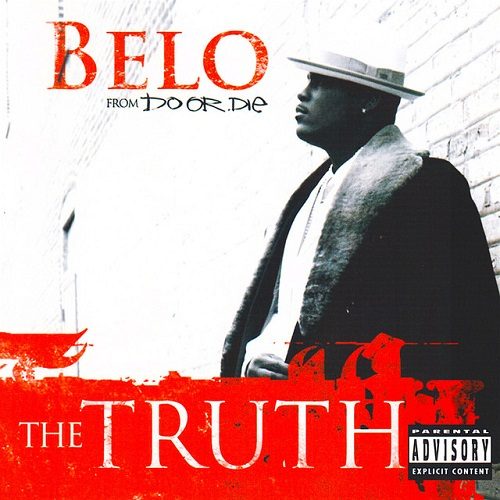 Do Or Die gets no respect. Outside of the Geto Boys, Do Or Die was Rap-A-Lot’s most popular and longest running act. Those boys from Chicago who started out po’ pimpin’ have slowly built a strong fan base and have released over 8 albums. Yet, despite their success they get no love or recognition outside of their legion of fans. That explains why in his solo debut, Belo has to include the “of Do Or Die” part to make sure people know just what’s up. Though no longer with Rap-A-Lot, the crew actually got better distribution and exposure when they moved to The Legion Records. After a couple of albums and a DVD release, the crew sets up Belo for their first official solo release. “The Truth” is more of the same from the Chi-town trio, but Belo holds up surprisingly well on his own. It’s not revolutionary music, but it’s solid and has enough standout tracks to warrant a listen.

The album already has good things going for it when you realize that The Legendary Traxster handles most of the production. The man behind some of the slickest beats ever put out has always shown Chicago natives much love and continues to do so. Gone this time are the ultra-dark beats that Traxtser dropped for acts like Psychodrama back in the day, but he shows good diversity on the “The Truth.” “Outlaws” borrows a bit from the current trend towards 1980s electro-themed rap beats, but does a decent job and at the very least doesn’t use a sample. “You Don’t Want To Be Me” features a nice mix of hard and soft pianos and smooth synths to set up a cautionary tale. “So Exclusive” finds Traxster hitting up the smooth R&B side that produced hits for him in the past. Other producers also do a good job, though nothing reaches the outstanding classification.

Belo flexes his signature high-speed flow that made him and D.O.D. famous. The strongest tracks on the album come from collaborations with The Outlaws. It seems Pac’s old group is everywhere nowadays, collaborating with as many acts as they can. “Outlaws” features a beat that could have just as easily been a hyped up party track but Belo’s high speed flow and Traxster’s dark synths give the song a slight street edge. The album’s best track is “You Don’t Want To Be Me” where the Outlaws and Belo make up for the unadulterated gangsta they dropped before by dropping a tale advising youths about the risks of a street lifestyle. “That’s How We Roll” doesn’t rise above its topic matter as Belo brags about his style and money, but the collaboration with Crucial Conflict is tight. Wildstyle of Crucial Conflict shows he can get down on the beats too providing a bouncy track reminiscent of their old hits. Johnny P is back providing the smooth hook on “So Exclusive,” where despite an obvious bid for a radio hit, Belo sounds good using his sing-song flow to freshen things up. Belo gets deep again on “God’s Wrath” and drops a strong track that’ll give anybody something to think about as he addresses everything from poverty to war. The album ends strong with “Church” that is the polar opposite to “God’s Wrath” as Belo crafts a catchy anthem based on the saying made popular lately by Snoop.

“The Truth” isn’t without its faults. Tracks like “We Don’t Play Around,” “Fake Hoes,” and “Touch Em” are of the generic type expected on most gangsta rap releases. But despite the fact that it’s easy to get tired of clichÃ© gangsta rap in today’s industry, Belo gets a lot more credit due to his seniority. He’s not doing gangsta rap because it’s cool, it’s what’s been paying his bills for over ten years. Even the most generic music on “The Truth” gets extra points just because of Belo’s slick flow. Once you get past the generic you’ll end up experiencing some great music that shows that D.O.D. has grown up in those 10 years since they first hit the scene. Though the album isn’t likely to help D.O.D. break out of its underground status, “The Truth” will definitely solidify their status as some of the most consistent rappers in the game.