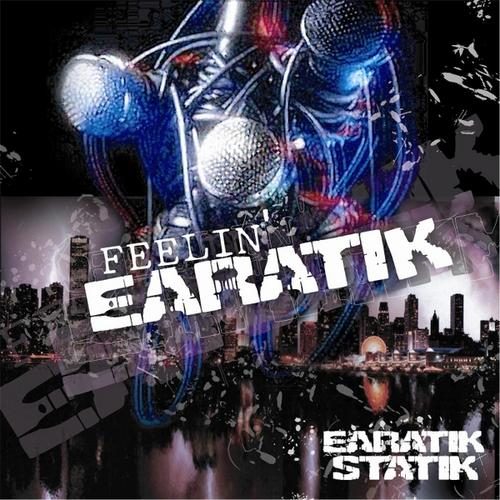 You don’t get an album to review these days without a press release full of information about and accolades for the artist or group in question. Gravel Records is no exception – the label has quite a bit to say about the national debut of the group Earatik Statik and their album “Feelin’ Earatik.” If you’re curious here are the important details from that bio: the group’s members are Celo, Abstruss Tone, and DJ Rude1 (also of Single Minded Pros), they’ve toured the world and shared the stage with everyone from Atmosphere to OutKast, and their lead single is named “Evil is Timeless.” Since I’m feeling generous I’ll throw out another fact all on my own – “Feelin’ Earatik” features guest appearances from K-Solo, Kool Keith, Akrobatik, Pacewon, and Edo. G among others.

Everybody up to speed now? Good, because press releases don’t really tell you shit about an artist you’ve never heard before one way or the other. I’d much rather listen to the album and give you the low-down on their shit firsthand. And right from the “Get Live” intro, I’m already feeling where Earatik Statik is coming from. They flip that old Notorious B.I.G. “as we proceed” opening to “Who Shot Ya,” although they change it up to reflect their own crew with “get live motherfucker, E.S. motherfucker” and then round it out with an unexpected Shabaam Sahdeeq scratch: “Y’all herbs ain’t lethal, y’all niggaz is small people.” Damn, nice way to get my attention – not many people would sample Sahdeeq, let alone scratch him on a track. The pulsating and pounding Bathgate produced “Makin’ Moves” definitely takes things up a notch, although we may get another ridiculous anti-defamation lawsuit over the phrase “we makin moves like Rosa Parks from the back of the bus” (why doesn’t she realize rappers are paying TRIBUTE to her with these references). Although I don’t really know Celo from Abstruss, whoever is busting the words here can really flip script:

“A lot of MC’s suck, no good, they the enemy
Like pizza in a bad hood, you gets no delivery
While E.S., one hundred percent fresh, ready to impress
Mics we bless, and come off like a prom dress
They ain’t authentic, they a gimmick, they mimic
Gettin away from dope, quicker than a rehab clinic
With no class, no dopeness, no skill, no soul
Slider faster than, Oprah down a greasy pole”

I can hear the cynical among the audience already saying “yeah – just another underground rap group bitching about how everybody else sucks while proclaiming they’re the real deal.” Well it’s true, there’s a million indie rap records out there just like that, I won’t deny it. Earatik Statik seem to have a little more confidence in their delivery, a little more wit in their punchlines, and a little more dopeness to their beats than your run-of-the-mill underground rap group though. Since the press release cites “Evil is Timeless” as their first single, let’s use that cut as an example. Produced by The Opus, the musical backdrop is far from your typical hip-hop soundscape – to me it has the reverberating style of a lamellaphone (what some would call a “thumb piano”) being plucked harmoniously. Combined with a boom bap drum track and sharp lyrics, E.S. definitely cathes the ear with the song:

“In these streets competin to eat, one-time behind us
Flashin high beams in our streets, tryin to blind us
Friskin niggaz, grabbin they nuts, tryin to size us
Interrogate at 11th and State, to terrorize us
Plantin hella grams in our drawers, that don’t surprise us
Behind the gate, I’ll await court dates, that’s what the lie does
Chained up at 26th and Cali, that’s where I was
In line for Q-tips in my dick, to sterilyze us
A nigga asked me ‘Yo what you ride cuz?’
Rhythms and I just, got off of the blue bus
Now in my head from 6 to 10, that’s where my mind was
My P.D., tryin to cop us a plea, they wanna dime us
My case never had a fair shake, devils are spineless
Status quo, I’m up for parole, but they denied us
I’m breakin free now I’m out on the streets, and they can’t find us
Damn it seems grim to me, evil is timeless”

Even though the apparent rhyme structure seems relatively simple on the surface there’s a deep level of concentration involved to keep the last two syllablic sounds the same from one bar to the next and still intertwine a complex story about being framed by the cops into the words. Groups that bitch about commercial rap being whack while their jams are fat may be a dime a dozen, but lyricists that show this degree of advanced ability while being introduced almost unknown into the worldwide rap scene definitely aren’t. These songs are far from a fluke either, they are the norm found through “Feelin’ Earatik.” There are a lot of different dope producers providing E.S. hotness throughout this CD; such as His-Panik of the Molemen on “Stop Playin’,” Rude One on “IllState Massive,” Brother El on “Keep Rockin'” – but what might be my personal favorite is Diamond D’s “People Like Us” – it’s fat through and through:

“Yeah, it ain’t shit for me to spit a rhyme, I come official with mine
Me without a mic is like Corone with no lime
Ain’t never been a obstacle that I couldn’t climb
Tight like static cling with my rhyme when I’m goin for mine”

Even though the cynic in you may not want to give Earatik Statik’s “Feelin’ Earatik” a chance, it’s certainly an impressive debut for this Chicago native crew, worthy of being copped whether you’re into the underground scene or just a fan of well produced, well delivered rap music. What’s most notable about Earatik Statik is that one feels from listening to them that they’ve yet to achieve their highest level of musical or lyrical dopeness, and that their potential to grow is limited only by their desire to be fresh – and if fresh be the squeeze then “Feelin’ Earatik” is far more juice than pulp.