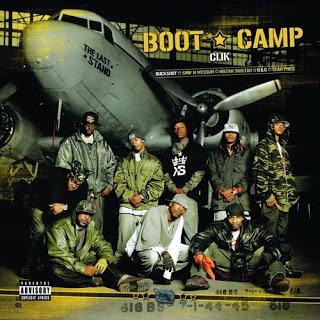 It was hard not to be a fan of the Boot Camp Clik back in the day. Da Beat Minerz were the “it” producers and hits like “How Many Emcees?” were running the airwaves. But like most camps birthed in the early to mid 1990s, BCC struggled once hip-hop began ruling airwaves and platinum albums were demanded. The label kept putting out a steady stream of material despite groups breaking up, but the albums never reached the classic status of “Enta Da Stage” or “Nocturnal.” After 2000 the label kept dropping albums but they were mostly crew compilations. Beginning last year, the label has seen a reemergence both in output quantity and quality. Ushering the new age was the highly underrated Sean Price with his long awaited “Monkey Barz.” Buckshot and Smif N Wesson (As Tek N Steele) also dropped quality albums during that time. “Last Stand” is the first compilation release since that series of quality releases and is a true test of whether the Clik is back as a whole.

One listen to “Last Stand” and it is clear that the Boot Camp Clik is back and in full force. The production duties are handled mostly by outside producers, but they do the job beautifully. 9th Wonder shows up and offers up three beats for the crew to wreck. “Here We Come” isn’t the conventionally track as it features a laid back beat while the crew proclaims their return to the top of the rap game, but somehow the combination works. Sean Price, Rock, Buckshot, Steele and Starang Wondah sound authoritative, yet understanding of rap fans who strayed from BCC in recent years. “Take A Look (In The Mirror)” is a more energetic offering from 9th and finds the crew reflecting, pun intended, about life. “So Focused” is 9th’s last offering and is his best contribution to the album, though the crew probably drops one of its weaker efforts with a half-hearted love song. I’m not the biggest fan of 9th Wonder’s production over an entire album, but in short spurts it definitely adds good vibes to the mix.

Other big names adding to the mix include Pete Rock, Large Professor, and Da Beatminerz themselves. Rock’s “1-2-3” isn’t his best work this year (check the Ghost and Jim Jones albums for that), but the track is an interesting mix of hardcore New York beats and old school west coast melodies. Large Pro’s “Worldwide” is a funk filled affair that should please fans, both old and new and from all coasts. “â€¦But The Game is Still the Same” is Da Beatminerz contribution to the album and features an extremely dope guitar and bass melody but little else. It’s dope for what it is but it could have used a little more in the mix. The crew still rips the track relating how things haven’t changed much since they ruled the rap charts.

If you don’t know, all the rappers featured here have a long history together and it shows. Most of your favorites from the BCC are still here, including Heltah Skeltah, Smif N Wesson, and most of O.G.C. and Black Moon. As rappers, the whole click flows well together track after track as showcased on the aforementioned “Here We Come:”

Sean Price: “Hey yo, new shit, out of the blue, Freddy and Duke kick
Black and blue shit, fuck it, just listen to the music
It’s Sean, once again, back it’s Da Incredible Rap Team
Slap steam out your fuckin’ physical frame
Listen my nigga, Ruck is the name
A broke rapper ready to rob niggas, tuck in your chain
Rob a nigga for a buck and some change, play dice with that
Doubled-up like ‘I don’t like the rap'”

Rock: “Yo, son’ll get his same two fucks I don’t get
Other than that, we the complete opposite
He hot, I’m cold, he high, I’m low-down, he fast, I’m slow
Or vice-versa, Ying & Yang, not from Atlanta, though
No, I’m a New-Yorkian, Doctor Kevorkian
Niggas ready to die, stick a fork in him
I got a shot for him without a syringe
To walk you up out of your misery quick as you go walk up out of your crib
(Damn!) Monster mangler, madman man-handle a mob
Of you mutha fuckas with a backhand on the beat
He, he, he, I will mass transit strike down upon thee with massive vengeance
And ye will know that I am thee Lord, Rock, damn it
The hot-handed, respec-onizing whether you can or cannot stand it
My Boot Camp is the best-est ever to do it, stupid
When you see it, you better salute it, we steppin’ to it”

If you’re quick to dismiss the chemistry on the fact that Sean Price and Rock were a group before, check BuckShot and Steele’s verses:

Buckshot: “Sure, I’m the client, but I’m also the president
And I’ll still rob your resident
Ever since I became a MC, I made change
And ain’t shit change, I’m the reason your chick came
Literally and physically, she did it with me
Now she takin’ seeds out my weed
And we gettin’ nasty like sneezin’ in food
Twenty-four hours on the grind, we in that mood”

Steele: “Yeah, ‘For the People’ we ‘The Chosen Few’
Worldwide Boot Camp, pay-per-whole a view
Peep the symmetry, more then the symphony
Now each song is a documentary
The God’s drop the epilogue for greatness
Took pain off faces, the rage mark pages
From the block to the cages
You our main inspiration when we rockin’ on stages
We came a little way from beats in the basements
Stick-up kids, throw the heat to your faces
And even though we don’t be meetin’ them cases
But we stuck on these chases to get these papers
And the system is ancient, we dishin’ the haters
Wishin’ that our Clik never make it, but
We took it back to the basics
Mastered The Matrix, BC crashin’ the station”

The rappers sound great together and while they all drop dope verses, they don’t sound like they are competing with each other. Such chemistry can be seen on every track. Subject-wise, the songs featured here walk the line between street, commercial, and traditional rap beautifully.

Albums like “Last Stand” aren’t very easy to pull off. It’s difficult enough to put together a group of 2-3 rappers with good chemistry, so doing the same for 9 rappers is almost impossible. The soulful beats included throughout will probably not find their way on the synth-driven radio stations of today, but those who do peep them will be pleased. The crew’s stories touch on everything expected from a veteran crew of rappers, including the struggle of adapting to the changing rap game and keeping focused when things aren’t going as well as they should. The crew also throws in a healthy dose of the raw battle raps that made them so famous when they first came out. For longtime fans, “Last Stand” is the dope BCC album they’ve been waiting for. Those who stopped listening or never peeped BCC should definitely consider giving “Last Stand” a listen to see how rappers can achieve longevity and remain relevant without selling out or jumping on bandwagons.