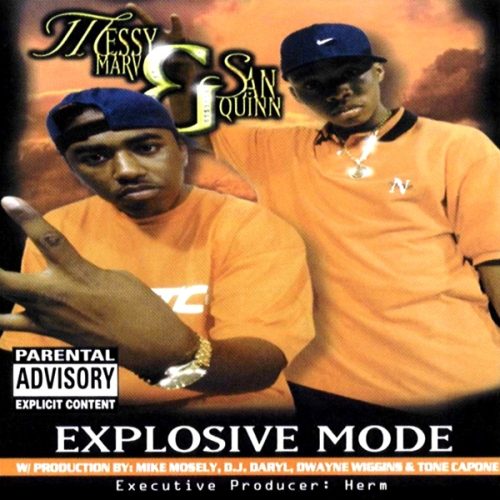 If you’ve been reading RapReviews.com for more than a minute, you should already be familiar with the name Messy Marv from reviews like Matt Jost’s “Bonnie & Clyde” or my own write up of “Disobayish” last year. What’s probably not as obvious is the fact that Messy Marv has been recording hip-hop classics on his own and with a variety of partners for years. In 2004 Scalen Muzik reissued one such album, 1998’s “Explosive Mode” with San Quinn. Instead of just putting one one disc of digitally remastered music, the label went the extra mile to include a “Chopped & Screwed” disc as well as a bonus DVD. While we won’t get into those extra features on this review, now seems like a good time to review the main album itself and see just why such a re-release was warranted.

Individually Messy Marv and San Quinn are among the finest out of the Bay Area. Marv has a pimpish fly flow and seems to have no problem coming off smooth on any beat, and San Quinn has that deep voice that gives him a commanding presence any time he grips a microphone. Putting the two of them together is like putting together Daz Dillinger and Kurupt, or Run with D.M.C. – it’s just a natural fit. Once the appropriately groovy beats are applied to the mix, it all comes together lovely – on songs like “Money Now” for example. Just peep out how San Quinn and Messy Marv spit on the track:

San Quinn: “Ain’t no friends we all cousins
Baby networkin, money ain’t nothin
You got it all? You need to quit perpin
A quarter million wouldn’t satisfy me
I be a Master like P, and I act like Luni
Only God can do me
Burn a crutch with doobie, approach smoothly
Only ladies with paper amuse me, and broke hoes choose me”

Messy Marv: “Trust a bitch I never would
Hoe I’m too major, havin paper like Tiger Woods
Famous in the ‘Moe
Rob from the rich and slang llello to the po’
Flip and manipulate a dumb hoe
for way mo’, I tell ’em BIA-TCH!!
I love ballin’, how could I be tired of bein rich?
Been off the hook so long, got disconnected unexpected
And you niggaz is wrong for payin hoes and hoe protectin”

If you hadn’t already guessed, “Explosive Mode” ain’t exactly a politically correct album, but it does invoke some of the finest traditions of West coast Bay rap music. Long before it was trendy nationally, this duo was all about making sure to “Pop Ya Collar” with guest star E-40, over a classic G-Funk beat. In fact taking the P-Funk and making it G-Funk is what these two do best on fly songs like “Discourteous,” but they also wreck their own brand of bumpable beats on tracks like “Presidential” while straight showing the “Bay Luv” to all their fellow compatriots wrecking the scene from Vallejo to Fillmoe.

Messy Marv and San Quinn are unapologetically gangsterish, pimperish, misogynistic and straight twisted. You won’t find them offering apologies to women, trying to lie on their dicks, or making false pretenses about how hardcore they are while crooning ballads softer than Boyz II Men. That’s exactly what makes “Explosive Mode” an unheralded West coast classic, as well as a hip-hop gem. Messy Marv and San Quinn spit game from “Home” to “Takin’ Inventory” and the beats remain solid and consistantly appealing throughout. This is an album to party to, to enjoy in the headphones at home, and to most definitely cruise with the top down on no matter what state you hail from. This one’s right at home in the laid back Sunshine State though, because Marv and Quinn don’t have to exceed in gangsterish behavior to make a hardcore record. Occasionally their G gets tested, but for the most part they stay cool as a fan, and the most explosive part of “Explosive Mode” is how well the beats bump in your subwoofer.