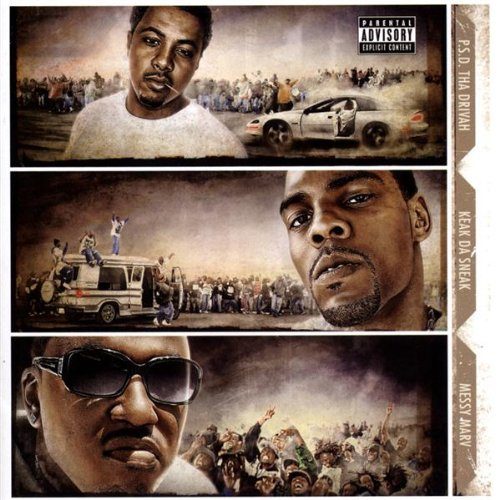 For years I would avoid collaboration albums from the Bay Area simply because I had been tricked too many times by false advertisement. I was done with top-billed artists barely making an appearance, with badly photoshopped group shots, with missing credits, with in every way hastily cobbled together rip-offs that aimed to cash in on the popularity of sometimes completely unsuspecting stars. But lately I noticed that Bay joint ventures have begun to step their game up again. So I took my chance with this respectable looking ’07 release by veterans PSD Tha Drivah, Keak Da Sneak and Messy Marv, and I wasn’t disappointed.

“Da Bidness” delivers on all aforementioned accounts. The artwork is excellent, the credits are complete, and the three billed stars appear on the majority of the tracks together. Despite having been burnt, I respect the Bay Area’s long-standing tradition of joining forces, forming alliances, getting together in one-off all-star teams, preferring the fleeting format over the crews, clans and clicks that apparently exist since childhood and the follow-the-leader mentoring projects that are more popular elsewhere. This democratic approach, if implemented correctly, guarantees that these collaborations are gatherings of equals, not of superiors and subordinates. As they say, game recognize game. Or as Messy Marv says: “I’m a real nigga, I got it from sellin’ cavi / Keak and the nigga PSD had to get at me.” And guests like Mistah FAB fall right in line: “My cuds is cut from the same cloth / no yes-men, my dudes is boss.”

While not as known as his two partners, PSD represents Vallejo on releases since the mid-’90s. On “Da Bidness,” he is on par with fan favorites Keak and Mess, balancing their sometimes a bit peculiar deliveries with a cool, calm and collected presence. He reminisces on the drug-themed “Gumbo Pot,” “The coke is what gave us hope / Young nigga on the block; we ain’t got it, then we servin’ soap / for the Federal Reserve Notes cutthroat / like money is the motif, even fuck my folks.” He dwells just as much on loyalty as he does on betrayal on “Fakin’ it Ain’t Cool,” and he triumphs over the somber atmosphere of “Burdens of His Youth.” He talks good game on “Bottom Bitch” and “Hoes…,” the latter featuring the late great Mac Dre, who is paid tribute to by fellow Crestside cuddies and Cutthoat Committee members PSD and Dubee on “Eff Da World, We Luv Furl (2 Step Remix)”: “He birth’ my career, many of my peers’ too / Thizz in peace, cud, cheers to you / From the 4-track to ProTools, tapes and CD’s / relative for 17, reppin’ them 3 C’s.”

The album contains its share of hyphy (or half-hyphy) tracks, such as the singles “Cus, Cus” and “That Go,” or their ode to camel toes, “Deerfoot.” But much of the rest is surprisingly sublime. There’s rarely been a heat-packin’ rap song as subdued as “Reloaded,” for instance. “Fakin’ it Ain’t Cool” even dares a hook interpolation of “Careless Whisper” without much detriment (unless you absolutely love or hate Wham!). Producer Droop-E continues to expand his repertoire with the delicate, Sade-sampling “Burdens of His Youth,” or with “Gumbo Pot,” where dad E-40 cites a line from his classic “Ballin’ Outta Control” over a playfully anthemic sample once used to great effect by Masta Ace for “Paula’s Jam.” Jake & The Phatman deliver with the intimately catchy “If She Know Me, She Owe Me,” Clipso summons our trio and guests Mistah FAB, San Quinn, Dubee and Turf Talk with a light flute and a heavy piano on “Thick O’ Thangz,” Indo & Fireworks serve up a heavy slice of slapping bounce on “Yee!!!!!!,” and Rick Rock works his magic on “Cool Nigga,” entering the vocal booth himself to help get the point across: “‘Federation? Man, them niggas just ain’t rappin” / 20’000, packed house, everyone clappin’ / 2’000 outside, everyone scrappin’ / and it’s all for the love of the Bay / And I don’t care what the outsiders say / nigga, we cool.”

With three co-stars like Keak, Marv and PSD, it’s hard to argue. But coolness is just one way to put it. These MC’s are masters of their craft in the sense that they can project much more across that microphone than mere words (i.e. lyrics) can express. There’s an attitude displayed on records like this that cannot be duplicated, that has to be lived by the artist to come alive in the music. You cannot learn this attitude in hip-hop workshops or college courses, it is generated by living the life. Keak puts it almost poetically on “Yee!!!!!!”: “I’m street-talkin’, deliverin’ what the earth say.” The streets school these rappers, for better or for worse. It comes with the territory that their music is both informed and ignorant at the same time. That the trio is largely on the same level despite hailing from different cities can be attributed to the Bay. They have that in common, but beyond that the album doesn’t tie up any loose threads. It is, not surprisingly, mostly more of the same. It is called “Da Bidness,” after all, so don’t expect them to form a bond for life, because the next collaboration album is always around the corner. As long as they’re that good, I’m not complaining.