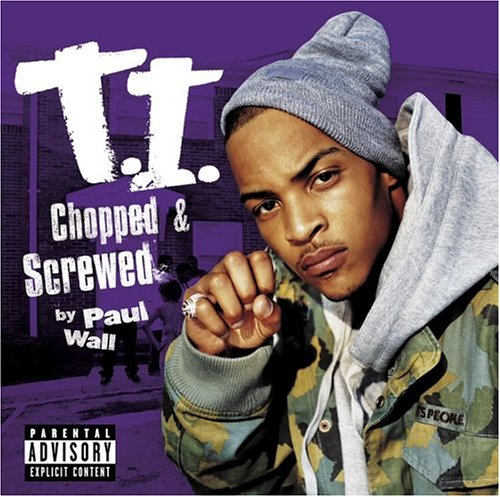 T.I.’s star continues to rise in the hip-hop scene. Originally a local phenomenon of Atlanta and the Dirty South, T.I. stepped up to the next level with the 2004 release of his album “Urban Legend.” Even those who didn’t know him well had heard about his verse being removed from Young Buck’s “Stomp,” or about his beefs with other rising Southern rap stars like Lil’ Flip, but “Urban Legend” established that with or without the controversy he was going to shine brightly. From the lead single “Bring Em Out” with it’s clever Jay-Z sample to hot tracks like “A.S.A.P.” and “Motivation,” it was clear that after years of paying dues T.I. had finally arrived. Guest appearances on his CD were coast to coast, from Lil’ Kim on “Get Ya Shit Together” to Daz Dillinger on “My Life,” proving his appeal was as widespread as his contributors.

The “Chopped & Screwed” album is a uniquely Southern hip-hop format though, and not often heard or understood outside of the Dirty South’s confines. While the late great DJ Screw may have popularized the format, it’s taken on a life of it’s own since his passing. For the record let’s put it down like this – ANY moderately successful Southern rap record is likely to get the chop’n’screw treatment, whether bootleg or legitimate. Despite speculation on the part of some that the sole purpose of the format is to slow down songs to the point they sound normal to the hazy brains of those drinking “sizzurp,” the tracks sound just as good without self-medication. When songs are screwed, the bass beats draw out longer and the voices of the MC’s get deeper and richer. Combine that with the chopping up of the vocals for musical and verbal emphasis, and the results are very pleasant to the ears.

It’s a shame this format hasn’t caught on more in the North and the East, but with major labels showing an increasing willingness to remix and re-release their own albums, it’s only a matter of time. A chopped & screwed “Urban Legend” would have happened anyway, but Grand Hustle and Atlantic Records made the right choice to print and release it nationally, with acclaimed Southern music maestro Paul Wall producing the mix. The new version’s purple cover makes it stand out on store shelves, and is no doubt a sly ode to the sizzurp which for better or worse can still be an inspration to the sound (it may only now be dawning on some Northerners what “Purple Stuff” Big Moe was talking about in his big crossover hit). These songs all shine with their brand new “Chopped & Screwed” treatment, but I’m particularly fond of how the Jazze Pha production “Get Loose” featuring Nelly turned out, as well as KLC’s “What They Do” featuring B.G. and Mannie Fresh’s crunk beats for “The Greatest.” Paul Wall clearly knows just the right pitch and speed to play them at, and he chops his shit like a Japanese steakhouse, so “Urban Legend Chopped & Screwed” works perfectly. It’s not better than the original version per se, but it’s certainly not any worse either. It’s good enough it could stand on it’s own, but for those who already have the original “Urban Legend” it will be a nice change of pace.