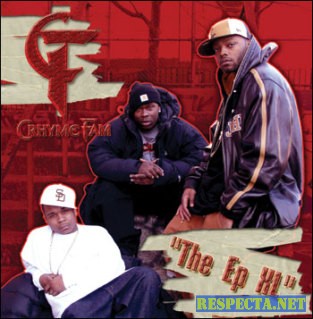 Hailing from the infamous QueensBridge housing projects, Crhyme Fam has a strong reputation to uphold. The fact that the crew managed to make a buzz and get signed, coming from a hood that has spawned hip-hop greats such as Nas, Cormega, and Mobb Deep is reason enough to garner attention. Crhyme Fam even manages to gather an impressive arsenal of guest producers/emcees for their debut EP, “The Ep XL.” On the production tip Psycho Les (of The Beatnuts), Lord Finesse, and The Alchemist make an appearance each and Prodigy (of Mobb Deep) drops some vocals for the EP’s single, “The Realest.” Thankfully, Crhyme Fam backs this feat up with solid music proving they are not just not just trying to take advantage of their QB legacy, but are trying to add their own brand of street-hop to it

The EP starts off with an intro that, were it not for a smooth soul-sampled beat, might be easily skipped. The crew, probably realizing this, keeps it short, dropping a few words before going into “Watch.” Produced by Lord Finesse, the track is driven by a creeping bass line and serves as a better intro for the group as they explain just what Crhyme Fam is about. Group member Cash Dro’s first verse on the track captures the essence of Crhyme Fam:

“This is for the record, it’s either ride or respect it
My niggas will leave you leaking just for speaking so reckless
You think you gangsta cuz you sleep with a vest, bitch
Too much money invested, I merk you leave in a lexus
You wanna bling? I might just leave you my necklace
So you can shine on your way to heaven, riding the next dick
I stayed loyal, always stuck to the script
When the coke drop, cash is on the block stuck on the strip
In one spot as if we’re stuck in cement
Crack and matics stuck up under the bench
I swear I’m under the shit, cops was looking I was under the whip
It’s funny how these niggas seem to forget
I live my life on the run
A man with honor I’d give my life for my son
And you a coward only reason you breathing is cause I allow it
You get devoured shot stomped and outted
Believe it or not that nigga Cash Dro is bout it”

The rest of the crew and the remainder of the album follow the formula of hardcore street lyrics with enough one-liners to keep you listening. “Gangsta” is more of the same from the group and features signature QB production by Ax Trax as the 70’s soul sound created by the guitars and strings on this track would sound at home on any Mobb Deep or Mega album. Ax Trax goes for more of a club/party feel on “Vibe With Me” and though its not a terrible track, coupled with the crew’s generic lyrics this song misses the mark.

ETAN manages to bring the album back to its QB roots with the mellow guitar and stirring string arrangement on “Backout.” Crhyme Fam remains true to their name and style on this track spitting street inspired lyrics with occasional witty lines. “The Realest” follows and as the EP’s official single it handles its job well, but it definitely could have been better. Ben Grimm provides the group a pounding beat reminiscent of some of Mobb Deep’s hits and Prodigy sounds good on the track, but ultimately the hook is an uninspired take on the Mobb’s “Survival of the Fittest.” Psycho Les’ contribution to the album is actually very disappointing because it consists of a remake of Positive K’s “I Gotta Man.” The fact that Les produced means little as anyone could have handled such a remake equally well. The track is definitely a change of pace from the crew’s usual fare as they thug out a classic party song, but it probably would have been best left as a mixtape track as it really doesn’t add to the original.

Ben Grimm returns for “Curiosity” and delivers an average track, though the crew sounds good flipping the script completely as the track serves as a grimier and darker version of the “Gotta Man” concept as the crew spits:

“I admit it ma, you bad, and you may not be up for grabs
But much for my curiosity, you got a man now
All giving you everything you want in me
And you still wanna fuck with me
Is he not on his job, and lately you been feeling disrespected?
Or is the love deeper than when we first connected?
I got a wife, you gotta play your part
Or we’re gonna part, same shit I told you from the start”

“My Life” ends the EP appropriately as the group reflects about their life and what they want their future to bring, the mellow production from Zack Johnson works well for the song’s concept. Crhyme Fam includes a bonus track produced by The Alchemist entitled “Street Shit.” Though not The Alchemist’s best work, it’s a very solid track with an ill piano loop and blaring rock-inspired guitars in the hook.

If “The Ep XL” is any indication of what is to come, Crhyme Fam should be the next big thing in a long line of QB hip-hop acts. The group has the backing of some of the game’s illest producers, and even the house producers come through with head-nodding beats. Lyrically, Crhyme Fam may be as street as they come but the emcees flow well enough and drop enough punch lines to keep you listening. This combination bodes well for Crhyme Fam and may very well lead them to the bigger and better things in 2005 and beyond.