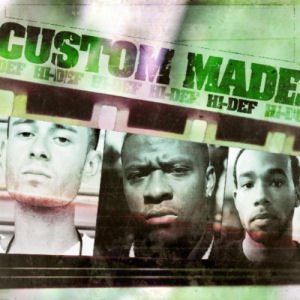 L.A. rappers Custom Made have had their share of trials and tribulations since entering the rap game in 2002. Theyâ€™ve had members leave, members incarcerated, and their former label sat on â€œHi-Defâ€ for over a year before the group got it released by NY label Coalmine. Custom Made havenâ€™t let any of these setbacks get them down, however. Theyâ€™ve slimmed down to a trio of  Bluff, Element, and Scoobs, and have kept releasing mixtapes in the interim. â€œHi-Defâ€ is their third official album, coming three years and a mess of label drama since 2008â€™s â€œOriginal Dynastyâ€ on Babygrande.

Their sound could be described as O.G. L.A. street rap. They come off like veterans who are weary from the life of streets and the life of a hip-hop artist. They are getting it from all sides: when they arenâ€™t dealing with shiesty club owners and labels, disrespectful crowds, and the grind of touring and recording, they are dealing with the daily drama of the streets, ex-girlfriends, and soured personal relationships. There is a constant battle in their lyrics between wanting to live a good life and the temptation of the streets. Maybe that explains their low-energy delivery, a combination of defiance and resignation that permeates the album. Itâ€™s like they know the game is rigged against them, but they are going to keep on keeping on, even if they know itâ€™s not going to end well. â€œMy main mission is to avoid prisonâ€ they rap on â€œTouch A Pen,” while on “Easy On Yourself” they describe the moral dilemma where

“My left side still telling me ‘Do it’
My right side says ‘think, that’s a felony, stupid'”

Production is handled by THX, Abstrakt Soundz, Jayem, Animoss, and Terminall. The overall mood is mid-tempo and pensive; there aren’t a lot of bangers or club joints here. The best tracks on the album have a slow-burning, bluesy groove. Tracks like “Gravel Swag,” Don’t Leave Me,” and “Touch a Pen” are built around moody guitar loops, and capture the sense of moral ambiguity and struggle that permeate the disc. It’s as if the producers are sampling the old-school tapes that Custom Made have playing in their systems as they cruise the urban jungle of L.A.

One negative side-effect of this mid-tempo, melancholy vibe is that “Hi-Def” can get be a bummer. It’s lacking in energy and joy and drags at points. Custom Made get props for keeping it real and not indulging in any of the aspirational fantasy that typifies a lot of rap music, but they keep it a little too real. “Hi-Def” is a raw, uncut look at a group trying to make it in a dying industry while avoiding lengthy prison bids. It can be a tough pill to swallow, but it is worthy of a listen.