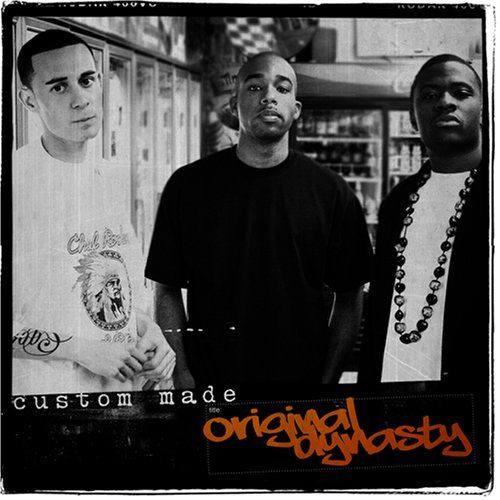 With these short lines in the album’s first song, “Stack ‘Em Up,” Custom Made effortlessly conveys the oppressive mentality that pervades both this album and so many inner-cities across America. “Original Dynasty” portrays these young men in a continual struggle against poverty, powerlessness, and the constant temptation to end both in the short term. The album depicts them as being in limbo between recognizing that a criminal life is a dead-end, but without the ability to survive through any other means. In this environment, hip hop becomes the only way out, and they can’t afford to stop hustling, or they’ll sink forever.

This conflict creates a nervous tension that is at the root of what makes “Original Dynasty” what it is. There’s a geniune anger here at a ruthless system that keeps “Troubled Adolescents” from achieving them, their only teachers being their own mistakes. They lash out at the government, the police, and the endless cycle that many times can only be seen in hindsight. Some members in the group have felonies, and while they acknowledge that they’ve gained wisdom from their mistakes, they grieve for all the people who’ve been lost because they just weren’t given a fair chance.

For all that anger, there’s an equal amount of pride present. There’s a feeling that they’ve gone through their worst trials in life, and this is their chance to put it all behind them. While they certainly speak against the wrongs and hardships of L.A. life, they also believe that they’ve come out of it stronger, and are ready to take on anything. Most rappers claim to be hard and fearless, but Custom Made doesn’t even bother – their unflinching, gritty honesty demands respect on its own.

“Original Dynasty” is filled with references to Los Angeles. Custom Made doesn’t constantly shout out artists they respect (like Game, for example), but their lyrics are so grounded in L.A. that it seems as though the album itself takes place there. As is the pattern here, there’s also a love-hate relationship with their city. On one hand, the harsh conditions they grew up in are a source of constant frustration to them, but they feel that it put them where they are today, and that they have to represent it to the best of their abilities.

What’s odd is that while their lyrics are obsessed with L.A. life, the music sounds like it’s straight out of New York. The productions are made up with the classic East Coast tradition of sped-up vocal samples; the music is much more indebted to the RZA than Dr. Dre. In fact, listening to “Original Dynasty,” you’d think G-Funk never happened and the south never blew up.

This east coast lean has its positives and negatives. It fits the album perfectly. The music is clearly intended to play the background here, and it does that while consistently conveying the right mood. The slow, ominous escalation of “Gangsta’s Theme” make’s them seem even more willing to start “blazing your chest,” while a simple-but-effective piano loop sets the stage for them to paint the harshest possible picture of a “Real Life.”

On the other hand, it makes “Original Dynasty” seem extremely dated – it would fit right in with the typical 1997 album. It still sounds good, but on the musical side, it’s something any rap fan has heard done better hundreds of times. And even within this context, there’s nothing extraordinary presented here. The best this album ever sounds is “good.” It’s a shame a group this talented couldn’t get better talent on the production-side, but this definitely has all the feel of an underground album.

The best thing about “Original Dynasty” is its core concept – the tension between wanting something more than their surroundings and not being able to attain it without tremendous risk. It’s a conflict that informs every moral and monetary decision within the album, and it’s refreshing to hear a group that seems resolved to do it through hip hop, and is endlessly appreciative of that opportunity.