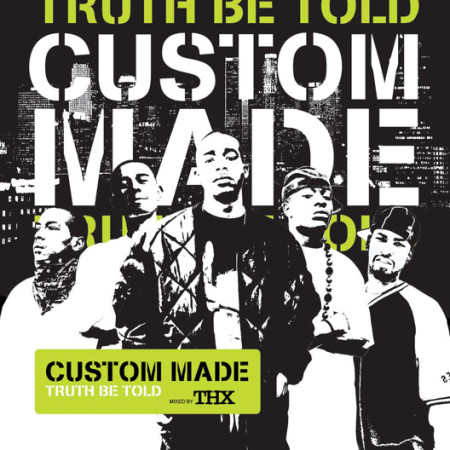 Custom Made :: Truth Be Told

Hungry; different; universal; and straight hip-hop: such are the terms that were used to describe past efforts from the five-man-strong rap group out of Los Angeles, Custom Made. Self-admitted nomads of the LA area, members Scoobs, Six Sinister (currently doing a bid), Bluff, Element and Aneek have steadily built a buzz around them predicated on the idea that they are this new, refreshing talent and skill from a city that has seemingly been lacking otherwise. To further their credit, Rawkus has taken a step forward to recognize the group as one of its “50” artists that it will throw its support and marketing towards. This has resulted, in part, in the Custom Made’s latest EP, “Truth Be Told,” which is described as a, somewhat, short sample of their sound and style, and a lead-up to a more extensive full-length release coming through Babygrande. If this, then, serves as the appetizer, the question is whether fans will be waiting around for the main course.

For this listener, the answer seemed immediately clear from outset. The introductory song “Where It Goes Down,” though prefaced by a lackluster beat and irrelevant background talk, jumps out with a wicked piano loop and pounding drums that act as the perfect backdrop for that grimy, â€˜round-my-way’ talk: “Los Angeles: either you bangin’ or pan-handlin’/ homicidal dropouts and even cops are scandalous.” To be sure, it is not anything new, but their trademark urgency and charisma evident in each verse makes it all the more contagious. This is further demonstrated on the following track, “Gutta Rap,” their ode to street, â€˜reality rap’ done over another more somber piano line that meshes its sad tone well with the angry raps of Custom Made, switching flows nicely and showing the group’s versatility.

“Rules are for Suckers” continues the same thematic guidelines set out in the first two tracks. Indeed, these guys love to rep their city, but feel purpose in the constant expression of struggle and grind found in the not-so-Hollywood side of LA. Verse one touts the racist side of US un-justice using a good sense of ironic wit:

“Even if your folks do post bail
Most niggas just get in some old shit then be back in jail
Here to protect and serve, but really I can’t tell
When America’s most wanted is the young black male”

Each verse done well in that Wu-style of splitting verses rides over a omnipresent set of strings and, again, that grimy, almost NY-feel, production. However, it is only 3 tracks down that the album travels a different tone and melody, opting for a more feel-good type beat on “I’m Home.” Here, though, the song is layered too heavily with what becomes an annoying phone ring and voice calling out (“Gee, I hope he’s home”) that undermines the verses below it describing even further the life where they live. Nevertheless, the group returns to that dark and sinister beat, reminiscent of Mobb Deep, on “Crime Connection,” then opting for a smoother sample and a heavy bass guitar on “Round Here,” and finishing the final two tracks on the more prevalent crime-oriented sound.

Custom Made definitely knows how to make an impression. At first, the passion grabs you, and then you are forced to recognize the skill. But while they do have an infectious beat and apt mic talent, it is hard to ignore the lack of content and overall unitary tone of the album. Although the crew shows promise in being able to handle the funk of a “Round Here,” they do so all too little, as the album tends to harp on that dark and angry pitch demonstrated in the majority of the selections. As well, as much as you might respect their consistent LA-repping and â€˜real-talk’, it makes for the subject of every track, adding to that redundant feel. Nonetheless, considering their skill, the listener knows they can do so much more (and doing more also means dropping those inconsequential skits that add nothing to the whole). It is part of their growth that, considering this effort, is something to which we can look forward.

Although 10 tracks is normally a bit more than what one may normally expect from an EP, remember that there are 5 MCs vying for your ear and seeking to strike that chord and bring you in for another listen. For real, it is tough to not take in that enthusiasm and charisma shared by all members of Custom Made and partake in the universal sound of their music that spans that Premier-esque, NY feel to the verses that chant LA like it’s their last chance to say it. It is only hoped that their future work will feature a far more diverse subject range and provide a more varying sound, which is evident they seem capable of accomplishing. With that said, it is no wonder Rawkus added them to that roster of 50, as Custom Made seems poised to re-work that LA sound in their own manner.