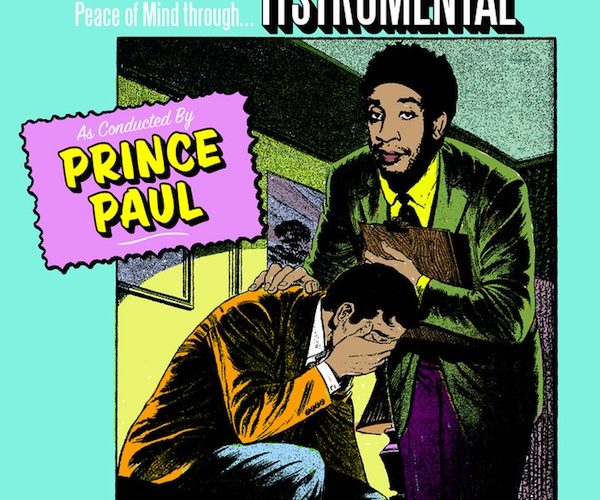 One of the most underrated and under-appreciated producers around, Prince Paul has definitely been in the game for a minute. Beginning his career as Stetsasonic’s DJ, Paul would eventually contribute to albums for icons Boogie Down Productions, Big Daddy Kane, and MC Lyte. But it was his work on De La Soul’s milestone “3 Feet High and Rising” that would forever change the landscape of the hip-hop industry. Liberally using samples from all genres of music and pretty much any sound-bite he could get his hands on, Paul set the production standard for creative originality.

What’s next, you ask? Recent industry trends would indicate an instrumental album. With so many producers dropping lyric-free albums lately, it was only a matter of time before the sampling guru delivered one of his own. Female Fun, which has distributed instrumental albums for the likes of MF Doom, DJ Spinna, and J. Rawls, gives Paul the platform to do what he does best. The album itself is a mix of previously unreleased beats and his latest material.

Just like most of his other work, “Itstrumentals” is a concept album, loosely tied together with an underlying story. Since there isn’t an emcee to tell the story, Paul relies strictly on the use of samples (with the exception of a few guests) to guide the listeners. Opening with a parody of popular TV show “Law & Order: SVU”, we learn that detectives are in search of our favorite Long Island beatmaker. Those familiar with Paul’s work know that it’s deeply layered, complex, and constantly evolving. Describing each track in detail would be impossible. All I can really do is give a broad overview and let you know it’s definitely worth the purchase price to hear yourself.

The fun starts with “It’s a Stick Up”, a drum-heavy backdrop sprinkled with horns and piano keys. “Flattery” is a lightweight, calm production with a plethora of amusing voice-acting samples. “My Friend the Popmaster” is a tribute to Black Italiano the Popmaster. It takes advantage of the contrasting sounds of a thick, booming drum beat and breezy strings.

“Inside Your Mind” features Mr. Dead and MC Paul Barman over a frantic production. The two guest don’t contribute the usual verses, but rather add another sound layer, allowing the song to remain as abstract as possible. The soothing “El Ka Bong” incorporates looping violins and a memorable bell.

“MVU (Act 2)” is a hilarious skit. Let’s just say it involves bootlegging Nelly’s “Sweat” and “Suit” albums and a guy impregnating consumer electronics. I’ll leave it at that. Paul definitely doesn’t take himself too seriously and all four outlandish skits are sure to elicit laughs. “Yes, I Do Love Them Ho’s!” is a smooth head-nodder where Paul comically loops two dueling samples for a “the bitches/Your ho’s” chorus. “What Are You Afraid Of?” is a hypnotic beat that samples what appears to be a recorded Spanish lesson. “I Want You” (featuring Bimos) layers countless synthesized and ’80s throwback melodies.

“Profit” sounds like Paul pulled it straight from Buckingham Palace, adding a crazy drum beat for good measure. “The Boston Tap” is an unconventional reggae-ish joint that features Mr. Dead and Newkirk. The stripped-down beat is accompanied by laser blasts that could’ve been lifted from “Space Invaders.” “And the Winner Is?” is a classy, hotel lobby production pumped with steroids courtesy of a rim-rocking drum. This track is a certifiable banger. Speaking of bangers, the incredible “Gangsta’s My Style” uses heavy drums and high-pitched chimes to steal the show. Just imagine a more rhythmic version of Dr. Dre’s classic “Keep Their Heads Ringin'”. The mellow “The Night My Girlfriend Left Me” features another brief cameo from MC Paul Barman.

Of all the songs on this album, “Live @ 5” is the most demonstrative of Paul’s full range of talents. Here, he plays all the instruments himself. The track ebbs and flows, navigating the spectrum from quiet and calm to frantic and jarring. The album ends with the lumbering “Think or Die”.

“Itstrumental” is further proof that Prince Paul has perfected the art of sampling and experimentation. This will be painfully obvious to those who’ve heard his work on “A Prince Among Theives”, “6 Feet Deep”, and “White People”. “Live @ 5” shows that he’s also a capable, well-rounded artist. Those looking for hip-hop to deliver original sounds, this is the album you’ve been waiting for.