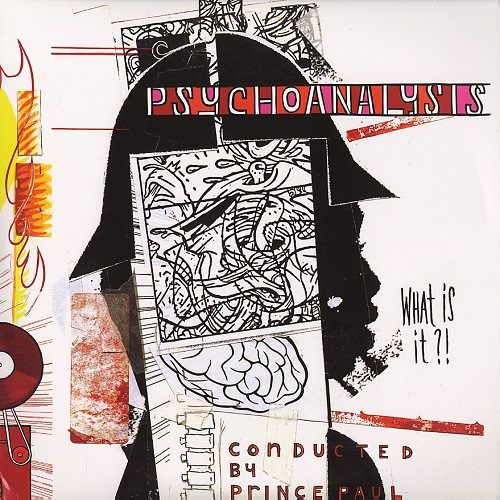 Prince Paul :: Psychoanalysis (What Is It?)

Prince Paul is an odd fellow. While even the best producers can generally be categorized into a specific form of rap music, Prince Paul has always left his fans guessing. The epic “A Prince Among Thieves” was a full-blown hip-hopera, and easily his most ambitious project. Other projects have left question marks in the minds of his faithful, such as his decision to bless MC Paul Barman with an entire EP of magnificent beats. Actions like these are why Prince Paul continues to be relevant deep into the first decade of the twentieth century, because while others are stuck on past glories, he continues to do whatever the hell he wants. He built his legacy on breaking the rules, and he hasn’t abandoned this creativity for a second.

“Psychoanalysis (What Is It?)” is a strange record even by his standards. This is the first album he recorded as a solo artist, and it is also his first foray into instrumental music. The word “instrumental” must be used loosely with Prince Paul, and anyone who has heard his recent “Itstrumental” knows that he frequently uses obscure vocal samples and friends’ voices to supplement the music he crafts. “Psychoanalysis” is no different, and it actually contains a handful of songs with the assistance of rappers. Additionally, every single song has some form of spoken audio, and a couple of tracks are focused heavily on the words. In short, this record is better described as a sixty minute adventure through a creative mind than anything else. It is not a rap album, but it isn’t an instrumental work either. It is simply a Prince Paul album, and that is the only way it can truly be categorized.

The concept surrounding the record is clearly stated in the title. Several of the songs are subtitled with psychological terms such as schizophrenia and aversive conditioning, but this is only the shell of the album. It would be very difficult for a producer, even one of Prince Paul’s caliber, to actually explore some of the psychological conditions referred to on “Psychoanalysis,” so Paul does this in subtle manner. There are outright parodies of certain types of hip-hop, less ambitious instrumental tracks that seem to exist simply as examples of attentive crate-digging, and moments that are unsettling even to the most acclimated fan of this musician. This record is far from slight, but it is also not accessible enough to gain heavy rotation in any sort of player.

The album opens with the lush “You Must Hate Me,” introduced by a stuffy sounding psychologist. The track behind the vocal samples is marvelous, and the contorted guitar quickly becomes the most outstanding element. The same psychologist ushers in the next cut, “Beautiful Night,” in a clip in which he requests his patient to relate a dream to him. Here, the joke is more direct, as the patient proceeds to describe four horrific incidents that are presumably part of his dream. The contrast between Prince Paul’s wonderfully relaxing musical concoction and the vicious words is darkly funny, and even the harmonizing voices in the background are singing of the violence in an elated manner.

“Introduction to Psychoanalysis (Schizophrenia)” flips the music a bit with ominous synths that sound like rejects from the soundtrack to “A Clockwork Orange.” The vocal snippets are difficult to make sense of, but a casual listener can easily ignore them in favor of the outstanding production. This is a brief departure from his jazzy roots, though, and Paul quickly re-enters his comfort zone with “You Made Me (A.K.C.),” a track that consists of hard but distant drums enveloped in two separate piano loops. The construction of the vocals suggests an exploration of love, but again, appreciation of the song can be gained through the instant gratification of hearing the standard but appealing production. “You Made Me” overstays its welcome a bit, especially since the outstanding “Vexual Healing (Vacillation)” follows. Uniquely constructed drums and a catchy vocal sample are the heart of this track, but Prince Paul continues to surprise me with his ear for tunes. Here, a bluesy loop that borders on perfection is used. Since the track is fairly long, he throws it on just enough to keep attention, but not enough to allow it to grow dull. Additionally, when it is absent, the drums are accentuated even more, allowing for heightened appreciation of the rest of the song.

Unfortunately, the second half of “Psychoanalysis (What Is It?)” begins to fade a little. An amusing Schooly D parody, “J.O.B. (Das What Dey Is!)” is a pleasant inclusion that reaffirms the Prince’s affinity for humor. “Booty Clap,” a celebration or mockery (one of the two) of Miami bass, is another welcome song in the same mold. As with his later “Politics of the Business,” he imitates the two sub-genres so well the parody is difficult to discern. Of course, anyone who is previously acquainted with Prince Paul knows that almost nothing he does can be taken completely seriously.

“Drinks (Escapism)” is another solid cut, driven by a section of slightly unsettling bells, but if the record is listened to in one sitting, the song’s perceived quality is lessened by the realization that it is about the ninth song of its kind on the LP. Though each song is unique, the formula begins to wear. The biggest culprit is the vocal samples, which are sometimes nonsensical and far too frequent to be thoroughly enjoyed. “In Your Mind (Altered States)” benefits from the presence of Prince Paul’s favorite Popmaster on the vocals, which saves it from stalling in place. “Psycho Linguistics (Convergent Thought)” is very notable as it contains a rare verse laid by Prince Paul himself, and a very competent one at that. This, along with the parodies found in the middle of the disc, is one of the few breaks from the bizarre constructions of the rest of the material on the record. The album concludes with an Automator remix of “Beautiful Night,” one of three bonus tracks scattered throughout the tracklisting of eighteen.

Upon close examination, much of the music on “Psychoanalysis” is less complex than it first seems. This is the result of the probably intentionally obscure nature of both the music and the words. Since the average listener cannot begin to get immersed in such a record, it is passed off as unnecessarily bizarre and complicated. We should all know who this man is by now, because he is one of the unrelenting geniuses of rap music, and he is immeasurably important to the culture. Those who listen casually to rap music, or are not willing to expend energy on something not immediately pleasant, will probably not approach this anyway. This decision is their loss, though I certainly understand someone’s reluctance to wade through this tidy little mess.

When I bought this album for the second time a few weeks ago after its mysterious disappearance from my collection, the clerk, a self-proclaimed Prince Paul fan, didn’y even know it existed. This assertion surprised me, but regardless, it illustrates the obscurity of the material contained within. Many people who loved De La Soul and the Gravediggaz have wisely steered clear of “Psychoanalysis (What Is It?).” If you begin to listen, there are two expected reactions. The first is to grow tired of its ambling craziness, and the second is to be sucked in. If this happens, it could be from the ultimately compelling music contained, or simply from trying to figure out what the hell Prince Paul intended to do. Regardless, the joke is on us, because after dedicating sixty minutes to this album, I feel a bit like its maker has psychoanalyzed me.

Prince Paul :: Psychoanalysis (What Is It?)
9Overall Score
Music9