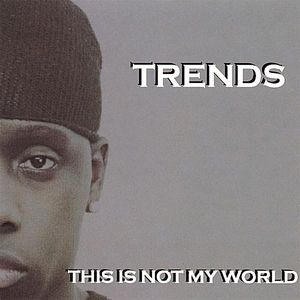 Trends :: This Is Not My World

Bed-Stuy born with music running in his blood, Trends is a man on a mission to destroy – well popular trends really. Although a conscious rapper naming himself Trends sounds almost ironic, the name could be accurate, considering the recent whispers of an intellectual shift in rap – i.e. Kayne West, Common, Talib Kweli. But the signs have been dicey. A change is coming, certainly. But right now rap is more fickle than an insecure Peter Parker deciding whether he should be the hero, Spider Man, or MJ’s cuddle-bug boyfriend. As the ever-prolific Nas said:

“So don’t be, accepting new ‘We Are the World’ records
These pickaninnies get with anything to sell records
Cause it’s trendy to be the conscious MC
But next year, who knows what we’ll see?”

Although idealistically I would love nothing more then to see conscious rap come swinging back at the industry like Ali in round eight, I don’t see it happening anytime soon. After going to see Lil’ Scrappy, Lloyd Banks and Young Buck this past weekend I lost all hope of intellectual reinstatement in rap. The night consisted of Lil’ Scrappy using cartons of waterbottles to simulate R. Kelly style goldenshowers on the audience bellow (if anyone was wondering, his man-sauce taste like GANGSTER) while Buck and Banks directly promoted stabbing, shooting and jail time to get ahead in life. On the contrary, Trend’s “This Is Not My World” opens to the singing of “I believe all kinds of kids succeed.” What, positive propaganda? GET’EM BUCK!

The first song, “Itakks Anthem,” is a lighthearted jam where Trends immediately makes his intentions clear:

A remorseful love song follows, wherein Trends makes amends for cheating, lying, and ganking the virginity of an itinerate schoolgirl. His apologetic appeal falls flat though without Al Green’s empathetic pitch problems or John Legend’s dopeass beats. Quickly the album shifts into a more conscious rap approach with “I Don’t Know” and “Scolla.” Both are respectable lyrically but suffer under their lackluster production. “Be Like Dat” actually sounds like album’s intended hit, but Trend’s lyrics sarcastically banter the party premise by asking “why it’s gotta be like dat?”

Early on, “This Is Not My World” begins to feel jaded, almost bland. Most of this is do to wishy-washy production, but a lack of lyrical empathy also damages the album’s philanthropic premise. Trend’s largest folly is not his skills, he is a respectable rhymer, but he makes the mistake of so many indie rappers today: instead of ‘making a difference’ as they so promote, they simply become anti-pop rappers. These doppelganger MC’s usually have the following characteristics:

90% of their rhymes are directed toward generic badmouthing of the enemy, popular rappers. They somehow hold the belief that hot beats are connected to the corruption of music. Thus, they rap over intentionally lame tracks so as to spit in the proverbial faces of the “industry.” Dreds. They have dreds. A surprising lack of conviction, equally on par with the big cheese himself – 50 Cent. (Yes, I’m jumping on the diss-50 bandwagon, purely for spite.)

Trends definitely falls under the first two. From “Scholla” to “Battle Shit,” Trends spends most of the album bragging about how good he is and dissing other, mostly gimmicky rappers – which is ironic, considering that is pretty much what every popular rapper does today. There is more focus in the album’s thematic tracks, such as “Catch 22,” “360” and “Little Sister.” Overall, the production is dull and uninspired. Most songs you can’t tell apart, while none stand out as exceptional.

The intention of the album is clear, but it’s application is haphazard. What Trends hasn’t come to grips with – as other successful, conscious rappers have – is you must focus on the music first, message second. Kayne West didn’t get clubs to play “Jesus Walks” because of its religious rhetoric, but because it was a dope song. If Trends can shake the artistic vice of being anti-this and anti-that and improve the music itself, the kid WILL succeed. Right now “This Is Not My World” is not for too many of us.

Trends :: This Is Not My World
5.5Overall Score
Music4
Lyrics7