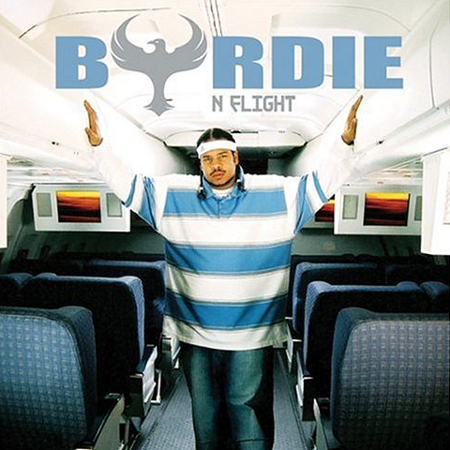 Hailing from Seattle myself, I always looked elsewhere for my music. Our music scene has always been incredibly intricate and successful, but not when hip-hop is concerned. We have had our share of moments, the biggest being Sir Mix-a-Lot’s “Baby Got Back,” but fans in the northwest have mostly looked elsewhere for their music. The underground has gained support recently with on the strength of various contributors. One of the best in the game, Gift of Gab from Blackalicious, enlisted local Seattle producers Vitamin D and Jake One for his first solo venture last year, and arguably 2004’s best song, De La Soul and MF Doom’s “Rock Co Kane Flow” was driven by a stuttering Jake One beat. Though still barely a blip on the national radar, the rap scene in Seattle is now far more complex and promising than most people give it credit for.

Byrdie has had impressive success in his hometown, scoring a couple of radio hits on stations that are normally devoted to the national scene. This fact is a testament to the potential of the artists in Seattle, because if people take notice, they will like what they hear. “N Flight” is his debut album, and it is remarkably refined for such an early effort. “B.Y.R.D.I.E.” opens the disc with plucky guitars supplied by Vitamin D, who donates three beats to the cause. Byrdie walks a fine line between radio-friendly lyrics and intelligent lyricism like a pro on the first song, and the result is a solid opening to the album. The track is a radio edit, which is a bit odd for the album version, but this certainly isn’t a new concept (see classics like “Shook Ones pt. II” and “Passin’ Me By”). In this case, it might be due to the absence of a pressing of the track as a single.

“Who?” follows, and the formula is quite similar to the previous song. Since it does nearly the same thing, with a slightly uptempo beat from Bean One and another friendly hook, it succeeds in theory. It ends up sounding very much the same, though, and the fact that these fall back to back hinders their accessibility. “I Wanna Know” featuring Darrius Willrich is a bit odd because of the smoothed out R&B and the abruptly rapid-fire lyrics from Byrdie, but something different is welcome. At this point in the album, it is clear that Byrdie and his collaborators are content with making good music that clings to the blueprints that many others have set. Over the seventeen tracks, there are a number of slower R&B tinged joints and a number of songs that are clearly geared to get the club hopping. The best of the slower songs is “Move On” with Choklate because Sekken Thautz’s beat is just varied enough to separate itself from the others.

The few standouts on “N Flight” do so because they try something different. “The Way of the World” is ruled by a steady, soulful beat that outshines the rather typical rhymes of the politically minded Byrdie and his guests. This song’s production doesn’t strive for either of the sounds that much of the other material seems to, so it separates itself from the rest. “Fan Favorite” is a straight battle cut on which Byrdie demonstrates a brash confidence, and the Charlie Bernardo beat should give his competition fits. Finally, “Where Were You” has Byrdie attacking his absent father with en emotion that is rarely found in an emcee’s voice, let alone on a debut album. His passion is hardly enjoyable because of the subject matter, but his anger is well-founded and he articulates his fury very well. This effort makes it clear that Byrdie can be one of the best when he channels his emotions in such an effective manner instead of dallying with attempts at radio play. More of this unfettered frustration would have gone a long way. He demonstrates plenty of power in urging us to nod our heads, but the sheer number of tracks that supply such a message lessen the overall effect. Byrdie is clearly a talented emcee, but he occasionally seems to be compromising his talent a bit in throwing around weaker one-liners that are designed for immediate recognition by listeners. At a couple points on “N Flight,” he is the type of ferocious emcee that he can clearly become all the time. A couple of slower R&B tracks never hurt anyone, nor did a few bouncy club anthems, but this record is strewn with them, and the more creative, truthful moments are tough to find.

As debuts go, Byrdie is off to a nice start. If he can realize his potential, people will have to listen. There are far too many commercial missteps to be a complete success, because the production on the club songs is often lackadaisical and underwhelming, but he keeps his composure throughout and shows signs of top-flight talent on a few occasions. He has a lot more skill than this record would suggest, and it still didn’t turn out half bad. A bit of extra work in the studio will do him well, and for now we’ll have to be content with “N Flight,” which is a clear hint of what’s to come.