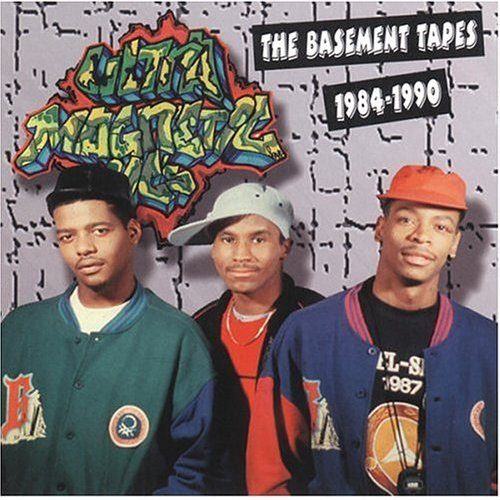 It’s no secret to most hip-hop heads that I’m a die-hard fan of the Ultramagnetic M.C.’s, and subsequently became a huge Kool Keith fan through all his iterations from Dr. Octagon to Diesel Trucker. There have been some ups and downs along the way, particularly with Keith as a soloist. Unquestionably Keith Thornton is a genius, but he also has a tendency to explore his own whims and fetishes (musically and otherwise) to the point where he can overwhelm a listener’s interest. Sometimes his best work comes from reigning in his own tendencies, and sometimes it comes from letting them range as far into outer space as possible.

Eccentricity seems to have been the status quo for the Ultramagnetic crew as a whole though. While Kool Keith was able to leverage his oddness and develop a cult following that has maintained to the present day, Ced Gee seems to have not fared as well. In fact while Keith’s adventures as a psychiatric patient in Bellevue are the stuff of legend, his fellow Ultra rhyme artist seems to have been hit the hardest by the group basically going their seperate ways in 1994. There are as a result varying stories surrounding the existance of this “Basement Tapes” album released the same year, none of which have ever been fully verified. Some tales even suggest Ced Gee took disbanding the group so hard that he developed a drug habit, and that the “Basement Tapes” album is a result of him scraping together whatever Ultra material he could find in a desperate last attempt to cash in on the name before it was too late.

Listening to “The Basement Tapes 1984-1990” from start to finish, it’s hard not to give that otherwise wild theory some credence. When Ced introduces the opening track “Make You Shake” his voice is so deliberately slow and labored you question whether he could be the same rapper who so effortlessly floated through songs like “Ease Back” and “Make it Happen.” It leads one to think either somebody gave his vocals the “DJ Screw” treatment figuratively, or that he gave HIMSELF the DJ Screw treatment with some sizzurp quite literally. The liner note credit that reads “all tracks produced by Ced Gee” is credible though, drug addiction or otherwise. Ced’s musical role in Ultra has always been understated, and those in the know realize he had a hand in BDP’s “Criminal Minded” as well. Unfortunately compared to the quality of the Ultra material that was released, these tracks are clearly the rejects. “Make You Shake” has an overly abusive echo effect right from the beginning, and the repetition of the word “make” throughout gives one eerie feelings Rakim will suddenly say “make ’em clap to this.” Keith and Ced’s lyrics are very hard to distinguish because of the choices made in recording, but seem in general to be very simplistic compared to their later work.

Ced seems very confused as he introduces the next cut “Space Groove,” as he at first seems to be talking about the opening track and then can’t really recall when the song that follows was produced – so he takes a GUESS. On a compilation whose most redeeming aspect may be historical preservation, that’s not really acceptable. “Space Groove” fares a little better, although the beat they are attempting to electronically interpolate was used to much harder and more brutal effectiveness 6-7 years later on Tim Dog’s song “I’ll Wax Anybody.” Speaking of whom, he appears on what might be the first truly acceptable song of the album, titled “Ced-G, Tim-Dog (Lab Free Style).” Yes that’s not a typo – that’s how it’s listed on the back cover and insert. After a series of underproduced tracks Tim’s hardcore freestyle rhymes over a simply looped old school beat are something of a relief:

“Ahhh shit, well I’ll be God damned
The life that I live is not of mortal man
Pursuin my righteous, hype just, might just get
another chance to uphold my lightning
Peace, now at the least
I’ll crush a motherfucker that gives me beef
I’m the hardcore master, one that has ta
cruise right past ya remain disaster
So step – what the fuck you got beef for
You fuckin with me for, a kid on a see-saw
The man in hand that sass the clan the motherland
So what’s your damn problem man?
Comprehend and then, if you still pretend
That your rhymes will win, I will fuck your girlfriend”

The quality of things improves somewhat at this point. The song “Smack My Bitch Up” may be the key ownership point for most people picking up the CD. Even though from listening to the song it’s clear the final mixdown and mastering had not been done, the track as it exists is still clearly legible and shows that Keith had the phrase in mind long before The Prodigy (who ironically featured Keith on their album). His rhymes also show the versatility and eccentricity of his mental process and rhyming prowess even this far back:

“I’m mega-pimp, the biggest pimp in New York
Everywhere I go, you follow wherever I walk
On Madison, I pull a ho with my gold voice
To show her my mansion, my custom Rolls Royce
I’m large, let me call up the President
Or Michael Jackson, or Frank Sinatra
With two hundred million dollars, baby I got’cha
A hot dog, now take a Coke and a frank
And if you think I’m a fool, what the fuck do you think
That you thought like Nellie, with her big belly
Walkin around smellin pissy and smelly
Givin it all you got, tryin to work and jerk
Flirt berzerk, you ain’t fly
Because a fly has wings, and I’ll swat ’em
Urinate on ’em and warn ’em twice to step to the next man”

It’s sad to note that the song which follows, “Ya Not That Large” has all the hallmarks of an Ultra classic but was never used. In one of the few intros by Ced Gee that’s not pointless and confusing, he states that the engineer got so high during the recording of this track he accidentally erased parts of it, which you hear during playback on this release. The quality of the songs after varies from track to track “You Got to Feel It” is a real 1980’s throwback featuring some schmoe named Ronnie T peforming the introduction, and the production is clean and really gives the feeling of an unreleased B-Side which didn’t make the cut at the last second. “Crush Kill Destroy” could have fit this bill as well due to nice verbal interplay between Ced and Keith, but the production errors and off-time beats remind one of RZA’s early works without the pleasant ruggedness the Wu’s debut had. “Brainiac” falls somewhere in between – good enough to have been a “Funk Your Head Up” B-Side but clearly in need of some vocal adjustment to match Keith’s verbals with the music levels.

“Scientist” may go down as both one of this album’s best and worst songs. Ced Gee normally had Kool Keith to work off of, so that even his more nonsensical ramblings actually seemed to make perfect sense paired with Keith’s own. While his verbal flow and diction are crisp, and the beat is head-noddingly enjoyable and oddly familiar, Ced’s lyrical ramblings on this solo track and mangling of big words he clearly didn’t understand are unintentionally absurdly comical:

“NOW I’m pickin up speed at a maximum pace
And all nucleus attached, must metriculate
With me the scientist, the man to compel
Against competitors, equal to excel
To a nuclear wave, events and above
all meters, contain precise, the same extended
Opposite to illusion is BASS
There be no confusion
To set my megameters, laboratory stories
I’m gain more glories in all, sorts of categories
To be raised up, a bit
Ced Gee, as an Ultramagnetic, SCIENTIST!”

Ironically Ced was probably just a little ahead of his time on this song, because Kool Keith made the same sort of non-sensical pseudo-science one of the hallmarks of his “Dr. Octagon” album to great critical acclaim. The chief difference though is that Keith seemed warped on purpose, whereas Ced Gee gives off the aura of someone trying too hard to be taken seriously. The album closes out with more hits and misses – the worthwhile “We’re Ultra (Part III)” could have been cleaned up and released, but the tape seems to have big chunks of the song missing and the beat needed a little more oomph. “Ya Nobody” is an excellent song which shows Keith’s disdain for plastic fraudulent gangster rappers even at this early point in his career. “Ya Sleepin'” is one of the best produced musically, but Ced’s lyrics on this solo track are overly simplistic and didactic. Closing with “Smoking Dust” may have been a witty statement by Ced Gee on his life at this point. Overall “The Basement Tapes” pretty well lives up to it’s name – it sounds like a collection of tapes that Ced Gee had lying around in his basement that never got used on any Ultra LP’s. Some of this material was worth resurrecting, while a lot of it fans of Keith or Ultra may not miss in the least. Whatever Ced’s motives were, this reviewer thanks him for preserving these tracks for history’s sake either way.