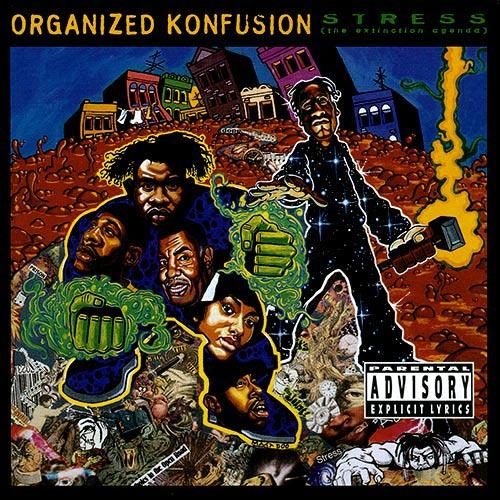 Every now and then, someone reinvents the expectations held above all of the world’s emcees. The first time this happened was when Rakim stepped into the studio in place of Freddie Foxxx and recorded the legendary lead single from “Paid in Full.” This event’s place in rap history cannot really be debated. Beyond this, though, the lines are blurred, and everyone seems to have a different perception of their personal additions to the list. Most would agree that the entirety of “Illmatic” qualifies, and I’m not one to disagree. Hidden behind the glow of Nas’ debut is the sophomore effort of Organized Konfusion. Their self-titled debut is probably the most praised album you’ll find on this site, and though “Stress: The Extinction Agenda” is not necessarily better, it contains the second coming of the God emcee in the form of Pharoahe Monch.

For those that don’t know, the duo of Organized Konfusion consists of Prince Poetry and Pharoahe Monch. They had established a reputation for weaving concept songs with descriptive lyricism on songs such as “Releasing Hypnotical Gases,” and their debut is a flat-out classic. Musically, the second album evolved from the first in adapting more to the trends of the time, spreading jazzy horns and assorted other tricks typical of the early nineties across the entire length of the LP. Lyrically, nothing much changed, except in the mind and voice of Pharoahe Monch, who made the leap from a world-class rapper to destroying the textbook definition of how to rap.

While sidekick Prince Poetry is a great performer on his own, his rhymes are demolished by every word that Pharoahe Monch utters. Pharaohe has complete control of his voice, and he is able to successfully do things with it that most rappers can only daydream about. His breath control is absolutely flawless, and he maximizes every single word for full effect. Either he is the most purely gifted rapper ever to walk this planet, or he spent months in the studio refining his flow to the point of perfection. He doesn’t just say “I’m shaping your brain like pottery,” he drags the last three words out, shaping them like pottery himself. He stutters for effect, he adds emphasis in all of the right places, and he actually roars before beginning to deliver his first verse of the album. His rhymes on this record are alive, they are vivid masterpieces, each and every one of them. To quote them cannot even begin to do them justice, because the genius exists as much in the style he uses in his delivery as in the words themselves.

Prince Poetry is a worthy mate, which is easily lost in the anticipation of each Pharoahe Monch verse. Po begins the experimentation with words on the self-titled cut “Stress,” delivering a verse that puts most artists of the day to shame. After a little skit in the middle of the song, the winding bassline and horns cut back through the silence and Pharoahe quickly announces his presence:

“You will now consider me the apocalyptic one
After this rhyme, henceforth, there is none
No more will exist when I emerge
From the mist in whence I was born into, scorned
Most of you can’t even comprehend what I am saying to you
Even in my human form the message I’m relaying
Why do you choose to mimic these wack MC’s?
Why do you choose to listen to R&B?
Why must you believe something is fat
Just because it’s played on the radio 20 times per day?
My perception of poetical injection is ejaculation
The Immaculate Conception”

Again, it is the delivery here that makes all of the difference. The message is strong, but his vocal acrobatics elevate the verse from mere great writing to provide a heart-stopping presence in the room. His voice fluctuates effortlessly in emphasis, and he is not merely rapping, he climbs and falls in perfect rhythm, maximizing the depth of each word. At times here he sounds like he is standing on top of a mountain, projecting down into a valley, and his vocals soar through the speakers with wings.

This duo built their legacy on conceptual rap, and “Stress: The Extinction Agenda” is a prime example of this. “Stray Bullet” has both of them taking the form of a bullet fired from a gun, and they each provide unique twists on the concept. Prince Po’s verse is scattered around a discussion of the implications of gunfire in various forms, while Pharoahe Monch details the path of one specific bullet in its heartbreaking trajectory. Aside from being tremendous lyricists, Organized Konfusion consistently strives to create miniature worlds with their rhymes, so in addition to being excellent natural entertainers, they both possess the drive excel as artists. There are numerous instances of shreds of concepts scattered throughout verses. On “The Extinction Agenda,” for example, Pharoahe places himself in a chess match for a few bars, and his rhyme shortly morphs into an indictment of Catholic priests, a topic likely more relevant today than in 1994.

“Thirteen” is a solo song for Pharoahe Monch, for which he mostly resides in the realm of battle rapping. His superiority over other emcees is plainly evident as he delivers three verses over the sparse jazz track. Here, his conceptual thinking manifests itself in little pieces, instead of over the entire song:

“I’m no slave to a rhythm, I whip it
Then I take its name and change its religion
Then I chop the foot off the fucking beat
For trying to escape the track, now it’s obsolete”

There are no true standout tracks, but the closest is likely “Black Sunday” due to the smooth, gentle production and the hook. The Prince and the Pharoahe exhibit another side of their talents, harmonizing between verses in place of a typical chorus. Most of the production on the record is credited to Organized Konfusion, though Buckwild assists on several tracks and helps with mixing as well. “Black Sunday” has the best beat on “Stress” because it is stripped down to a guitar and drums, and the vocals are allowed to climb to the forefront even more.

Pharoahe Monch’s most stunning work appears on “Bring it On,” as he drops a mindblowing verse that is the most extraordinary example of breath control I have ever encountered. For much of the verse he staggers his words rhythmically in a seemingly impossible manner. Moments like these are testaments to just how advanced he was in 1994, because no one rapping today can even approach this decade-old material. He sometimes does ordinary, clichÃ©d things, such as spelling out his name, but his method of doing so is infinitely catchier due to his delivery. In the genre of rap, most artists adhere to the traditional style of rapping by staying with the beat and never venturing too far up or down in pitch. Pharoahe Monch is as much a preacher or a soul singer as a rapper in places, because his voice carries so much inflection. His words are on a yo-yo, and the string is held firmly in his hand. He swings phrases around in all directions, and even when he settles into a normal groove, his vocal chords waver with such intensity that everything else is drowned out.

“Bring it On,” among other songs on the LP, sound a bit dated during the hooks because of the chanting that is implemented. This is the only true weakness of “Stress,” because the production, though too typical of the post-D.A.I.S.Y. Age jazz experimentation, is consistently solid. There are a few guest appearances, most notably O.C. reappearing to recreate the glory of “Fudge Pudge,” but every other song only features the duo trading verses. Organized Konfusion manages to create unique, engaging music on nearly every track, but the production will not be easily recalled due to the quality of the rhymes. Since Pharoahe Monch wipes the floor with nearly every other rapper in history, Prince Poetry is easily overlooked, but if attention is paid, he turns in a consistently brilliant performance as well. Together, the duo has crafted one of the very best records, from a lyricist’s standpoint, that hip-hop has ever seen.

Pick this up when you get the chance, because I promise you that no one will ever display such unflinching and daring work on a microphone. The techniques that Pharoahe Monch employs are all quite risky, because he is distancing himself from the conventions that the genre has prescribed. I am thankful that he showed such courage, though, because his vocal shapeshifting has made me question the talents of many rappers I have taken for granted. This is true emceeing through leading by example. He claims he is better than everyone else, but this audacious statement is made in a new way, and that is the mark of a true great. Be careful, because he just might inadvertently convince you that your favorite rapper is wack. At the very least, there is a lesson to be learned. On “Stress: The Extinction Agenda,” Pharoahe Monch tore through the vocal conventions of rap, and the result is a pure, dangerous display of emceeing that will never be approached.