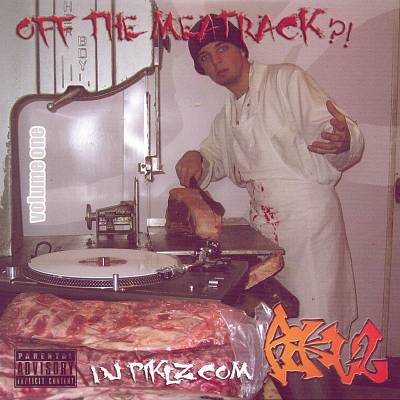 To be honest, upon my first encounter with DJ Piklz’ “Off the Meatrack?! Volume 1” I expected either another belated mixtape with tracks we’ve already heard a hundred times, or an epic ego trip from some rookie turntablist so impressed with the Invisibl Skratch Piklz that he flat out bit their name. Little did I know that I was was in for a pleasant surprise. DJ Piklz doesn’t content himself with playing other people’s music, he delves right into production, like a DJ Evil Dee, DJ Premier or DJ Spinna striving for more than just credit as the man behind the wheels. The (albeit not particularly hot) intro “Open” points at “all you backpackers who think you need an MPC to make deliciously hot beats, as well as those who refuse to listen to anything that is musically interesting,” referring to the slightly different musical approach with which “Off the Meatrack” was produced. In charge of keyboards and turntables himself, Piklz enlists the help of a bassist, a guitarist and a saxophonist. That doesn’t mean that no crates were raided during the making of this album, but it guarantees somewhat original material. I say somewhat because truth be told, its patterns are definitely familiar and some of the beats ironically do possess the typical homemade MPC appeal.

But credit where credit is due, with “Off the Meatrack” DJ Piklz proves that he can touch all bases, from stomper tracks to more subdued ones. Take the uptempo “Back on the Map,” coming from the dramatic, cinematic angle, seasoned with Rik Dex’ Non-Phixion-ized delivery, and juxtapose it with “The Stranger,” where a relaxing acoustic guitar accompanies Nablidon’s melodic, almost melancholic voice reflecting, “My life’s been kinda like a roll of the dice / sometimes you go for broke, sometimes your numbers are right / and it’s like I don’t think my luck is ever gon’ change / until I ante up and pay for those mistakes I made.” “Watch Yo Mouf” chops up classical strings, creating a hype track unfortunately somewhat obscured by Little Italy and their talkative, Jurassic 5-patterened back-and-forth. “Laugh Now Cry Later” flows smoothly, even as Faezone and Des Devious spit their resilient rhetoric before they’re interrupted by a conventional rock guitar solo that closes the track.

It’s easy to find the generic element in Piklz’ music, it’s predominant in “Believe in Something,” where a sped-up soul sample meets the triple-time flows of GLO and Nablidon. It’s there in the soul-sygnifying horns of “In the Building” and “Tomfoolery.” “Heres Just One Reason” is that self-made, underground-cum-commercial hip-hop Marshall Mathers has taken a big clue from. “Level-headed” revives the anthemic crescendo of certain ’80s pop rock tunes. In the end, the music on “Off the Meatrack” is not always refined, but it is always engaging, last but not least because the rappers all turn in inspired performances. Is it “musically interesting” as promised? Not particularly. But it isn’t boring, and that’s actually quite a feat on this level.

DJ Piklz’ guests return the favor with a number of quality verses that are definitely welcome “in these times of unevolved songs” (GLO). “Heres Just One Reason” sets the bar high with Hi-Caliber’s conscious opener:

“Revelations 21, New Jerusalem where I’m from
Crucifyin’ lyin’ lucifers by the ton
Executioners walk around with badge and gun
Government next solution – do away with paper funds
Cashless society? Forget it, god
How you gonna buy some hydro with a credit card?
It’s about time you opened up your eyes to what’s happenin’
the same ones who run the war on drugs run the drug-traffickin’
Caucasian or African, it doesn’t matter when
we all become slaves to this modern day Babylon
We stay runnin’ this political marathon
until the king returns like Aragon
One million troops strong in uniform
ready to swarm, it’s like the movie _Red Dawn_
Man, y’all heads been warned
We tryin’ to weather the storm
let knowledge be born
cause 85% of the population is misinformed”

The charismatic Substantial brings his veteran flair to “Tomfoolery.” The Hi-Caliber/KWA Rally collaboration “The Game Don’t Love You” is a mature reflection on the rap game/crack game congruencies. “Life” compiles everyday philosophical observations from Little Italy, Nablidon and Bulletman in their quest to “take life and give it some meaning.” There’s a fair amount of shit-talking, too, from battle-oriented cuts to the hilariously misogynistic “The Monstersquad.” There’s little star power on “Off the Meatrack,” so Q-Unique has the privilege of the last word, wondering what he “gotta do to gain your attention,” hypothetically killing himself to finally make “the cover of your favorite rap magazine.”

Names like GLO, Nablidon, Rik Dex, Hi-Caliber and KWA Rally are not likely to appear on the cover of your favorite rap magazine anytime soon. Until further notice, they’re just some local cats out the New Jersey/Tri-State area, of various backgrounds, but all dedicated to providing hip-hop with much-needed content. They give it their best on this CD, and their best isn’t bad at all.