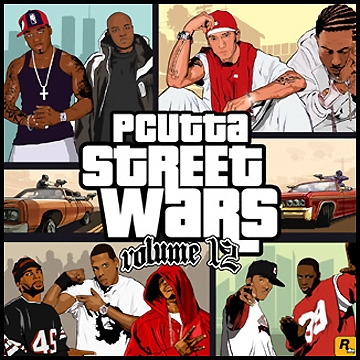 Rappers are a fickle, forgetful bunch, especially with regards to violence. Plenty of non-violence has been preached between calls to arms, sometimes even on the same record. KRS started this trend with cries of “stop the violence” on an album with an uzi on the cover. Years later, after the tragedies surrounding the East-West rivalry, feuding rappers were approached with oven mitts by the media, which was afraid of inciting similar actions between rappers. This caution was appreciated and ultimately necessary, because our culture could not withstand another rash of deaths amongst our heroes.

The sensitivity towards the threat of violence has begun to fade, and in its place have appeared countless verbal barbs, empty (hopefully) threats, and the occasional shoving match. Hip-hop’s inherent machismo has won the inner battle against humility and common sense, and the past couple of years have been quite tumultuous. There are certainly repeat offenders, but even they would argue for hours over who started each scuffle. No single entity can logically be blamed, because the media and the fans have become as embroiled in each feud as the artists are.

One thing is for sure: P-Cutta isn’t helping things. Volume twelve of his “Street Wars” series features a mouth-watering cast of artists such as Jay-Z, The Game, and Eminem over the span of 32 tracks. This mixtape is anything but boring, because the structure allows for plentiful freestyles and spoken messages between current burners like “Piggy Bank” and “Gatman and Robin.” Inclusions such as Skillz’s “2004 Rap-Up” spread beef more universally, instead of focusing on individual transgressors. Gravy drops a song called “Fuck the Labels,” which is the most amusing and the most significant because he goes for the throat of the record execs instead of squabbling with his peers.

A couple of specific feuds are focused on more intently, and as expected the disc is dominated by G-Unit, their affiliates, and their battles with foes. Prodigy gets into it a bit, going after Littles, Jay-Z, and Keith Murray, and the requisite responses are included as well. With few exceptions, the dissing going on here is strictly big names, which makes for intriguing listening. The majority of the songs are inconsequential because of the poor quality of the insults being hurled, however. Gone are the days of Common’s “Bitch in Yoo” when an insult actually meant something. There are no lines like “slangin’ bean pies and St. Ides in the same sentence” here, as most of these rappers appear to be content with tossing around impersonal claims about gunfire, and the instance in which someone is actually demeaned is rare. Even the legendary battle between Jay-Z and Nas is fading from sight, because the actual artistry of the battle has become a verbal shoving match without intensity. A few rappers haven’t forgotten how it’s done, and for these demonstrations look no further than the likes of Eminem and Keith Murray on this album. Most of the artists compiled here are far too concerned with sounding hard than actually winning a battle.

The lowpoint of this mixtape occurs when Benzino stops in to deliver the latest in his futile quest to record a coherent, relevant dis song. He, above all, fails to understand the basic principle of battling, which is to actually insult the opponent. I can’t imagine that Eminem feels threatened or hurt when he is called a “cracker” by Mr. Source and his homies, and informed in various impotent ways that he’s gonna get shot. Not that Benzino cares about any of this. He is probably quite content saying racist things while trying to stall Em’s career over the bigoted freestyle that was recorded twelve years ago. As for the actual barbs he heaves at Marshall, they are about as effective as one might expect. If rappers are going to quarrel, the fight should bring out the best in them, not the bland, cocky crap that pervades Benzino’s rhymes. The only actual insults being used involve Em’s family life, which is absolutely un-called for. Battles have the potential to turn ugly when the actual rap battle is ignored in favor of discussing the opponent’s past and personal life.

Regardless of one’s stance on beef in hip-hop, the chameleon qualities exhibited by P-Cutta are noticeable. A casual mention of the possibility of beef ending in hip-hop, made by Ryan Banks on track one, should remind the listener that such a future is becoming less likely. With an entire industry buzzing over the various battles, and even a mixtape series devoted to that theme, there appears no end at all. Regardless of this irrefutable vibration of the streets, P-Cutta admirably reminds everyone of the dangers of musicians butting heads with an inclusion from Ank Ha Menra entitled “What If?” Menra mentions several rappers by name, asking for peace from the tangling musicians. The few effects this has, though, include reminding everyone why the promotion of such material is potentially damaging to our culture. The evolution of beef is evident as well, because an extraordinary portion of the battling consists of bragging about record sales instead of actually jabbing at the opponent. Menra puts the entire situation in perspective, which is sorely needed on a mix such as this.

“Street Wars Volume 12” is thirty-two tracks long, so there will absolutely be something for everyone. The quality of the songs combined by the monotonous tone is unfortunately very hard to look past, and the entire concept of what is highlighted here finally begins to feel far too cyclical for comfort. The battles are either one-sided (Eminem vs. Benzino) or stagnant and unresolved (50 Cent vs. Murder Inc.), so nothing fresh is really occurring. Very few new faces are permitted in the place of big industry names, and unsurprisingly, these lesser-known artists are a treat. Domination blesses us with “In Ya Mouth,” an amusing variation on the Akinyele classic, with the purpose of mocking Game. The nod to Ak, while unoriginal, makes the album far more interesting than the countless freestyles from more established artists.

Those who still have a weakness for rap battles will dig every second just because of the excitement of conflict, but much of this music is too one-dimensional to really function in a musical sense. There is no doubt in my mind that mixtapes like this will continue to fuel the fire in the streets, but upon close inspection, nothing very incendiary is being spoken. If you want a full-length highlight of the battle situation on the streets right now, go for it, but be forewarned: this is an age in which everyone is tossing around insults, and as the quantity goes up, the quality of each battle is deteriorating.