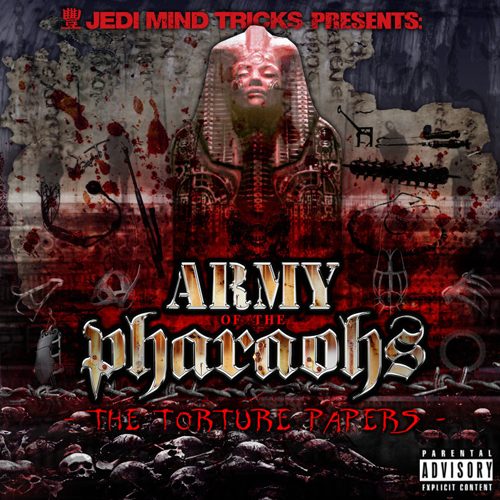 Army of the Pharaohs :: The Torture Papers

Conceived by Jedi Mind Tricks frontman Vinnie Paz as a rap supergroup with a membership rivaling the Justice League, Army of the Pharaohs is a name that describes them perfectly yet fucking hard to spell correctly. It’s no surprise that even on the album and the JMT website they frequently abbreviate it to AOTP, a convention I’m more than happy to adopt for this review. If you’re not into Egyptology and/or haven’t studied ancient history, just take it as a given that pharaoh means “supreme ruler.” Looking at the rappers featured on this album, it’s readily apparent this is a cream of the crop crew of MC’s who rule the underground scene – Apathy, Celph Titled, Chief Kamachi, Esoteric and Vinnie Paz himself among many others.

If you’re going to do a supergroup album it’s best to come correct with super beats, otherwise no matter how great the lineup is everyone’s going to feel like it was a fucking waste of time. Thankfully even though the cast of producers is as varied as the roster of MC’s the contributions still shine like gems. DC the MIDI Alien combines together smooth strings, piano keys, bass and a harmonious female voice crooning “la-la-la-la” and STILL makes it pound like a ten ton bomb on “Gorillas.” The title is self-explanatory on the Loptimist laced “Tear it Down,” but the M.O.P. samples including Fame screaming “Stepped through the door, tore the shit off the hinges” from “Rawness” give it that much more punch. The production can also be sublimely subtle though, such as 7L’s understated “Listen Up” and The White Shadow’s “Narrow Grave.” For the most part the “Army” in AOTP’s name is apt though, because it’s full-scale war on mediocre hip-hop, illustrated perfectly by the epic Shuko produced “Battle Cry” opener.

Apathy: “I put you up on the I.V., not the Roman numeral 4
But the I.V. that leads to the funeral floor
Wax gets melted; breaks bones, fractures pelvics
Speeds through space and cracks blast astronaut helmets
Face it, motherfucker I can pay to get rid of you
I’ve got more heads in the hood than pagan rituals
A new tyrannical force for you to fear
Known to kill and keep human ears as souvenirs
A shape shifter face slitter, paper getter
Tape your sister, rape your sister
Make your sister take it in the face
And if you’re facin us, block off a 30 block radius
I throw more blows than boxin Dr. Octavius”

Crypt the Warchild: “Aiyyo it’s my world, and I won’t stop
And if you stand in my way you bound to get popped
In the land where you lay, invade from straight shots
I demand that you pay and stray from straight blocks
I’m the man that you pray don’t spray the flames hot
I could tan in the blaze for days and stain cops
I astound and amaze, y’all praise the same god
I’ma pound out your brain and scrape the graveyard
Have you shout out in pain, y’all say y’all bravehearts?
I’m a box up your frame and play the same card
And I’m out for fame, spacebars and quasars
Pharaohs locked the game, no shame, we hate y’all”

You could keep quoting dope verses from the track ad nauseum but just accept that everybody on the song rips the shit, from Esoteric to Vinnie Paz to Celph Titled and on and on. They could have doubled the length of this song and kept right on ripping the beat, and I certainly wouldn’t have complained. The same could be said for “Into the Arms of Angels,” even though it’s a 180 opposite stylistically. While “Battle Cry” bashes you over the head until you’re forced to admit it’s dope, “Angels” is a Rain produced quiet storm that lets you step back and reflect on the thoughtful verbiage of the MC’s found within.

Crypt: “And what you know about, no heat and no electric?
I sold my MP to pay the bills, I’m so pathetic
I wake up and go to work, back aches and my shoulders hurt
And what’s it worth? A measily check that don’t control my earth
Still walk these hallowed grounds, bein lost but never found
Say to the Lord, “I’ll die for music”, but there’s never sound
Screamin in vain, everything be seemin the same
Ask my mom, “What’s the problem, why am I feelin this way?”
Ask my pop, “Can you solve it?”, this game I’m bleedin to stay
More then willin to give it up if I can’t live it up Hand in my clutch, gun in my lap
Doin a buck and some change, not knowin where the fuck I’m at
I try to maintain, the pain is unstoppable
Put my son on my back and I maneuver through the obstacles”

There’s a lot of hype riding on AOTP’s “The Torture Papers,” but unlike so many similar concept albums this one actually lives up to the press. Vinnie Paz is the glue that holds it all together, having released is as a “Jedi Mind Tricks Presents” CD and being the most frequent guest on tracks throughout the album. If you’re not familiar with a lot of the names on this disc it’s a good place to start in finding out more about them, and if you already are familiar it’s safe to say you won’t be dissapointed by the beats or the rhymes. Put AOTP on your checklist and rip this one to your MP3 player the minute you get it.