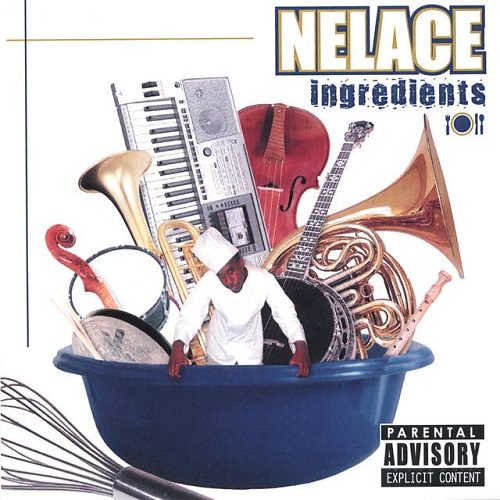 In three lines, there is Nelace’s criticism of the mainstream Rap scene. It’s a popular criticism from both rap fans and those unfamiliar to the genre â€“ that mainstream Rap music has gotten stale. Of course, rappers have been saying this at least since Common’s 1994 classic, “I Used to Love H.E.R,” why would this criticism, so popular, be worth noting for Nelace?

Because this quote is very true of the first half of Nelace’s “Ingredients.” Ironically, Nelace is so adamant in dissing random monotonous MC’s that he himself becomes one. The entire first half of the album is dedicated entirely to nameless wack MC’s and his own greatness. He may occasionally do this in creative ways (declaring himself an Alien, for one), but it’s an inescapable fact that Nelace’s rhymes lack any sort of real depth. He is entertaining, but talking about “Byters” over a self-produced beat that blatantly bites Timbaland’s style is ridiculous.

Nelace is far from untalented, though. While he can be redundant as a rapper, he is a formidable producer, producing or co-producing every song on the album sans one. The beats are where he really shines, although the electronic style he uses is a little odd, considering the cover displays him putting instruments (the “Ingredients”) into his composition. Even so, the album bounces all the way through and is extremely fun to listen to.

Even in his worst lyrical, he’s very nice to listen to. He flows over his beats to perfection, enhancing the overall sound of the album significantly. He never once allows what he has to say get in the way of his delivery, and his delivery is excellent, he’s able to manipulate the beats, stopping for the drum here, and accentuating it there with a consonant. He’s an unquestionably talented vocalist, and that makes “Ingredients” a very enjoyable album.

Nelace actually isn’t a bad lyricist either, more of a lazy one, waiting until the album’s second half to get serious. When he tackles a theme other than nameless MC’s or his own greatness, he’s actually very good at it. “Just Can’t Choose” introduces welcome side to him, where he is forced to choose between a love and his love for music, and is stuck between the two. The problem is that it takes nine songs for that to happen.

From “Just Can’t Choose,” the album lyrically undergoes a lyrical transformation, as if it were the B-Side of an old record. “It’s Curtains” is, on the surface, a threat to competitors, but between the lines begs for another answer. Suddenly, Nelace transforms from an empty rapper to a crusader against “Injustice.” It happens gradually, and happens without a perceptible difference in sonic quality.

This transformation is odd at best, and unnecessary at worst. The album would be much more effective if these songs had been more shuffled together more. On the plus side, the album reads well, as if Nelace were saying, “You other MC’s suck, I’m much better, here’s why.” But on the negative, the first and second halves blend together, becoming monotonous as they’re paired with a host of other songs with essentially the same point.

Even so, “Ingredients” succeeds in its most important aspect: being an enjoyable listen. Whether he’s having fun with “Same Song” or protesting “Injustice,” Nelace is an engaging rapper, keeping you listening even when what he’s saying isn’t very interesting. He’s a much more consistent producer, and this keeps the album flowing well. “Ingredients” won’t make any end of the year lists, but it’s a good collection of songs that will all keep your head nodding.