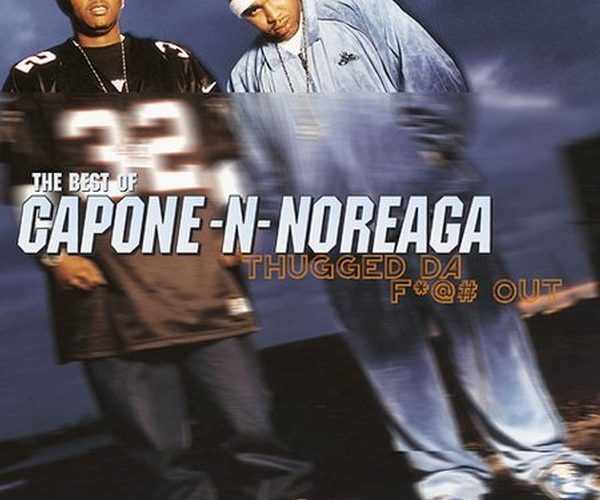 Among the realms of New York’s elite gangster rappers, there are few artists whose credentials are as solid as Capone-N-Noreaga. Nas may have sold more records, but he hasn’t done as much jail time as Capone. Cormega did do a bid, but these days (and this is by no means a diss) sounds more like a backpacker underground MC. Biggie? Well, he’s dead. Mobb Deep has more records, but Noreaga has probably had more hits as a soloist (giving Capone executive producer credit on each one while he was locked down) than Prodigy has. Actually the two crews are pretty closely tied, so there’s no jealousy or rivalry there. CNN’s first big hit was “L.A., L.A.” – a duet with the Mobb where the East coast rappers called out Tha Dogg Pound for recording “New York, New York.” No surprise really that they would be friends given that Capone grew up in Queensbridge, while Noreaga reps for LeFrak but it’s all good. And to fans of their first album “The War Report” it certainly felt like uniting the loquacious and verbal Capone with the grimy and bugged Noreaga was two hoods creating rap’s most gangster supergroup.

The bad news when compiling a “Greatest Hits” album is that due to Capone’s time in the slammer, there are only two actual CNN albums: the aforementioned “War Report” and “The Reunion.” The good news is that thanks to Noreaga’s productive solo career (three albums deep) there’s no reason for this compilation to fall apart. In fact the first disc alone is eighty minutes long. “Wait a minute God, did Flash just say ‘the first disc ALONE or am I buggin’ the fuck out?” No doubt Dunn, this joint collaboration between Tommy Boy and Rhino even comes with asecond disc of eleven more tracks – over forty-five minutes of material. It includes hip-hop rarities like DJ Clue’s original mix of “T.O.N.Y.,” the “L.A., L.A.” Iraq mix (for the uninitiated, Lefrak = Iraq), and tracks Noreaga made ill cameos on including Fat Joe’s “Misery Needs Company” and Crooked Lettaz’ “Firewater.” With the trend these days being to give away a bonus DVD of music videos with albums, some heads might be dissapointed by getting music instead, but this reviewer had no complaints.

Back to disc one though, and what a disc it is. If you’re a fan of CNN, or even just Noreaga himself, nearly every great track they ever did is here. There’s the Neptunes produced classic “Superthug,” a song which propelled their music career and Noreaga’s fame into the stratosphere. The EZ Elpee “Bloody Money” pianoes may be among rap’s most haunting, but not nearly as disturbed as their violent lyrics. Noreaga also proved he had a sensitive side though on “I Love My Life” featuring Carl Thomas, another classic Elpee production. You can’t forget about “N.O.R.E.” though, which coined Noreaga’s infamous phrase “gettin’ head in a whip and not crashin’ it” over a pounding Trackmasters beat. For those who’ve never heard the grimy finger licking good scratch of D-Moet’s beat on “Thug Paradise” featuring Tragedy Khadafi – well it’s no surprise since it was a cut on the soundtrack to “Nothing to Lose,” an equally forgettable movie. But that’s the beauty of “Thugged Da Fuck Out” – it has all the gems you remember, and some that for one reason or another you may not have gotten to hear.

Before we leave this album with perfect 10’s across, and it’s certainly a candidate given the breadth and depth of the content alone, one does have to take note of the fact that as lyricists go Noreaga isn’t exactly William Shakespeare. More to the point, he’s barely on par with Ja Rule. While both can play the angry thug/sensitive thug coin to perfection, neither has to worry about walking away with a “Hip-Hop Quotable” award from The Source or anybody else. It’s a little embarassing to hear “Banned From TV,” as good as it is, when a string of guests that includes Nature, Big Pun, Cam’Ron and Jadakiss all rain on his Puerto Rican Day Parade. The funny thing about Noreaga though is that like a wrestler with a terrible gimmick, he’s so bad that he’s good. “If you don’t know yo then I don’t know/ I’m gonna get me some head right after the show” raps the orally obsessed Nore in the song “Oh No.” No, he’s not a sophisticated thug, but he’s still damn entertaining when paired up with the right partner (say Capone) or the right beats (say the Neptunes boom bap of the above track). As a result while any other rapper might get a verbal beatdown for otherwise simplistic pap, Nore is both funny and charismatic enough to get a solid THUMBS UP despite his other shortcomings.

In conclusion, if you aren’t familiar with CNN’s repoitoire or legacy in hardcore East coast rap (often imitated but almost never duplicated), this is not only one hell of a great place to start but almost comprehensive enough to BE their whole catalogue. I’m not advocating scrapping the rest of their shit if you already have it, but if you don’t you could actually own this retrospective alone and be satisfied. Then again, it’s raw uncut reality rap, so you might just end up fiddeaning (a word that the bizarre one Nore invented himself) for more. Word up Dunn.