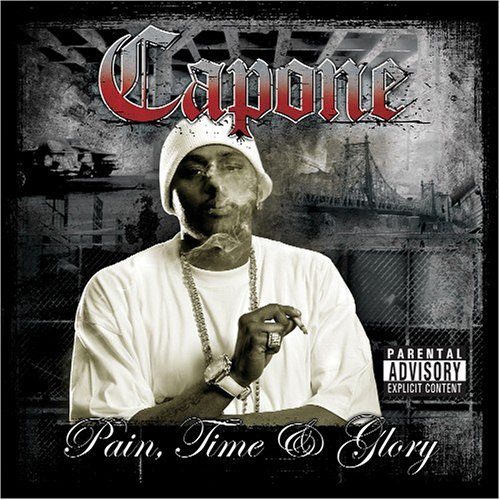 In a firm bid for “most delayed rap record of all time” (WAY up there with the likes of Sean P’s Monkey Barz, which came out shortly before this one -conspiracy?), QB stalwart Capone has finally deemed it unleashed his debut solo platter. While fellow Queensbridge enthusiasts (you bastards who will lap up anything from Maze to Noyd to Lake) will undoubtedly greet this record favorably, I would imagine the general populace is, at this point, somewhat oblivious to Capone’s momentous contributions to East Coast hardcore rap, considering how underwhelming the last CNN record was, how unprolific Capone’s output has been (giving even Imam Thug and Killa Sha a run for their money) and how far partner in crime Noreaga has veered from the nightmarish, apocalyptic narratives of his past. Thankfully, Capone hasn’t gone the path of his reggaeton-adoring co-defendant, and while this record is a far cry from the distinctively bleak, luridly lucid hardcore of mid-90s CNN, it is at least pleasing to know that Capone’s debut isn’t just a haphazard attempt at lining his pockets.

While several cobbled-together advances to Capone’s debut have hovered around the internet over the past few years, internet geekazoids will be pleased that the tracklist is free of ancient relics (something Cam’ron couldn’t boast with the similarly-delayed Purple Haze). A perusal of the tracklist yields much promise- a track with C-Murder and Bun B? A collaboration with Face?! Devin The Dude?!! RAEKWON??? Unfortunately, as with most anything in rap nowadays, any undergarment wetting is, for the most part, entirely unjustified, as the uniformly tepid production hinder these collabos from fulfilling their immense potential.

It doesn’t entirely help that Capone exhibits, for the bulk of this record, an unhealthy inclination towards the Dirty South sound that has set the overground alight over the past two years. A commercially sound choice, to be sure, but one that ultimately feels more bland than brilliant, especially when contrasted with the sublime brilliance of The War Report. When Capone does take a stab at East Coast hardcore, the results are similarly unimpressive- the Heatmakerz supply Capone with a host of flat compositions that would be better suited as Rocafella b-sides (“Crack Muzik” with ‘Pone’s set Da Block Militia even sounds like a State Property castaway, flow-wise). The sneering menace of Queensbridge is very scarce throughout, with only “I’ll Die For Mine” and “The Manual” resembling the stark, horrific, keys-driven template of vintage QB rap. Elsewhere, we see Capone taking a shot at ATL crunk (“Where The Stuff At”), poignant Ghostface balladry (“All 4 U”), Houston slump (“Nowhere To Run” with Scarface), G-Unit thuggery (“It’s Been A Long Time,” complete with sing-song 50 Cent chorus), Long Beach funk (“I’m Gone”), Free/Beans bombast (“Crack Muzik”), Pastor Troy thump (“Fuck Yo Set”). What ultimately results, of course, is a somewhat incoherent attempt at virtually every trend that has graced a mixtape over the past two years.

This is not to say that the record doesn’t have its patches of greatness. “Diet Plan” is a throbbing, surging, insistent number with ominous bassline and a very cool, if formulaic, mafia string sample supplementing Capone’s urgently voracious delivery. “Nowhere To Run” is a monumental track that features a stalking, murderous, trudging beat supported by strong performances from both Face Mob and Capone, who both complement the foreboding lead-footed doominess of the production with deliberately-paced, excruciatingly enunciated cadences. “I’m Gone,” while nauseatingly cliche in its staccato piano-driven beat and Nate Dogg-y Butch Cassidy hook, is saved entirely by another sublime Devin The Dude feature (unquestionably one of the most unique talents in rap now), whose syrupy drawl and unapologetically tongue-in-cheek subject matter provides for the finest 16 on the record. “The Manual” is vintage QB dirge, “Streets Favorite” uses a vocal sample in a clever fashion. Ultimately, however, one can’t help but feel as though this record would’ve fared much better if it were, indeed, a CAPONE record, as opposed to what amounts to a “Capone Sings The Hits,” trying his hand at an array of genres he should really have no business in exploring. Very disappointing.