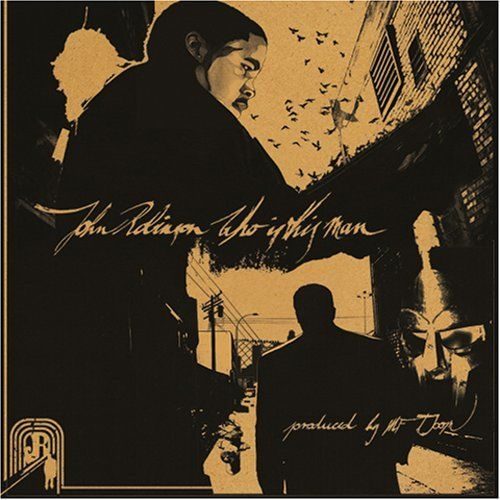 John Robinson :: Who Is This Man?

Q: Who is John Robinson?

A: Formerly Lil Sci of Scienz of Life, former KMD and current DOOM collaborator; also, a rapper who has been around for a minute, with a raspy, confident flow similar to KRS-One, and a respect for and command of his craft that can only come with years of experience; also, an internet sex killer (no relation, but it makes for some funny sound bites).

I got this for one reason: MF DOOM’s name on the production credits. I had never heard of Lil Sci or Scienz of Life, and until I got a few songs into “Who Is This Man?” I figured that Robinson was a newcomer to the game. He’s not, and his experience shows in his effortless delivery and lyrics. Robinson doesn’t waste too much time bragging. He’s been around long enough to be confident in his abilities without having to go on and on about it. His mature rhymes are a highlight of the album. He schools younger musicians on how to survive in the underground on “Indy 102,” details his history with hip-hop in “Crazy Music,” and “Expressions,” and even gets romantic on “There She Goes.” On “Black Gold” he attacks our oil addiction and the wars oil causes, rapping:

Robinson turns the spotlight on himself, admitting his own complicity in the wars for oil, as well as how hard it is to avoid being part of the problem. DOOM and Robinson go way back, and there is an easy chemistry between the two. “Rapsploitation” starts off with Robinson freesyling like a jazz musician warming up for a big solo. “Now who would do more than JR and the Villain/Sitting in the lab chilling/Sipping crushed grapes/Building on the fate of the children and where they going/And what they listening to/Which leads me to this system right here spitting these jewels.” He gets in one final dart at the music industry, complaining:

Many of these beats will be familiar to DOOM fans who follow his Metalfingers production work. Most of the beats have appeared on his “Special Herbs” beat series, and a few of the beats have been used by DOOM on his solo work. Despite the recycled nature of the beats, they still feel fresh, especially given how different DOOM and Robinson are. Where DOOM is off-the-wall and cartooney, Robinson is sincere and honest. He isn’t hiding behind a stage name, much less a mask. This honesty is admirable, but not quite as interesting as DOOM’s crazy as a fox supervillain persona. Robinson is a talented, solid rapper, but he lacks a certain pizzazz, and there are points on the album where his sure and steady flow gets to be a little monotonous. Fortunately, Stahhr, Invisible Handz, 20 20, and Jah Orah add variety to the disc with their guest verses, and Robinson’s lyrics make up for any lack of excitement in his delivery. “Who Is This Man?” is a must for any fan of DOOM’s production, and anyone looking for more insightful and mature hip-hop.

John Robinson :: Who Is This Man?
8Overall Score
Music8.5
Lyrics7.5