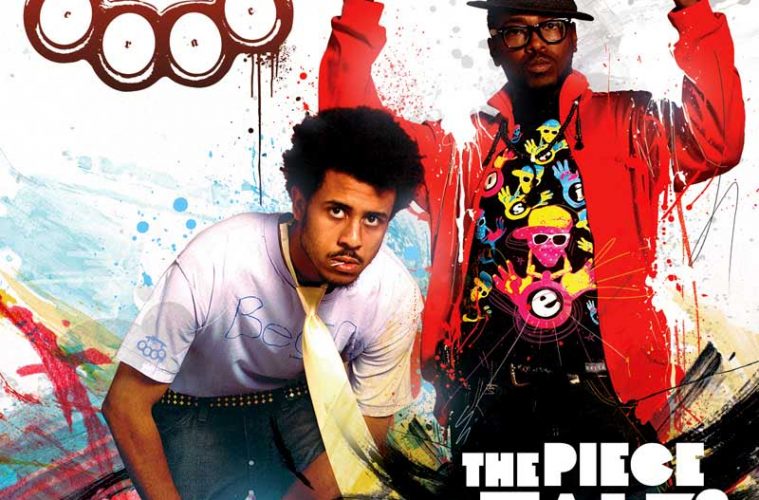 C.R.A.C. Knuckles is a duo made up of SoCal rapper Blu and Detroit producer/phenom Ta’Raach. Blu made waves with last year’s collaboration with Exile, “Below the Heavens.” Ta’Raach has been doing production for a while, working with J Dilla among others.

Right off the bat, C.R.A.C. Knuckles let you know that “it’s crass, bitch.” The name is an acronym for “Collect Respect Anna Check,” which explains a lot about “The Piece Talks.” This is no simple hipster rap album or conscious rap album. They may not be gun-toting ex-cons, but that doesn’t mean that they are soft, son. The album had the same sort of confused, self-conscious un-mellowness as “De La Soul Is Dead.” They clearly don’t want to be pigeonholed, and want to make damn sure that you don’t think that they are all about peace and incense.

Arthur Gailes complained in his review of “Below the Heavens” for RapReviews that the production rarely stood out. Blu seemed to have listened to that criticism, and works to corrects it on “The Piece Talks.” Ta’Raach brings a musicality to hip hop that is welcome. His Outkast-meets-Motown thing sounds much more alive and organic than the cold, hollow keyboard beats that are so popular these days. In fact the production threatens to overshadow Blu’s rapping on a lot of the album.

“Buy Me Lunch,” the first track after the intro, doesn’t have any rapping at all. Instead, it has a beat and an acoustic guitar over which Ta’Raach and Blu chant “It’s ok/don’t be serious/don’t be gay” while Noni Limar sings “Loverlution.” I’m not sure how one is supposed to have a loverlution if “don’t be gay” is one of the mantras, and that kind of needless assholery fucks up the vibe of the whole album. They repeatedly go out of their way to prove that they aren’t wimpy sensitive conscious rappers, and it is obnoxious. Case in point: “Cotton,” where they riff on Ice Cube’s “here’s what they think about you” and the racist tirades in “Do the Right Thing” to accuse their listeners of being 2% Jewish, among other things. Another case in point: repeatedly yelling “It ain’t crack, it’s crass BITCH!” Followed immediately by a song called “Crachause” which is pronounced “Crackhouse.” How about you get your spelling straight before you start insulting your listeners?

It’s possible that other listeners won’t be as sensitive to the duo’s hijinks as I was, but they probably will take issue with some of the failed the musical experiments on the album. “Crachause” “Bullet Through Me,” “Cotton,” and the last three tracks are so annoying, they end up detracting from the album as a whole. It may be fun to talk shit over an irritating beat when you are in the studio, but it isn’t fun to listen to. Once I deleted those tracks from my Ipod, it made the “The Piece Talks” much more listenable.

When they aren’t busy trying to prove how edgy they are, they actually make some pretty good music. As stated before, Ta’Raach does what he does well, mixing in old soul, harder beats, and tracks like “Respect” and “Chill” that rework classic hip hop. Blu can rap, and while none of lyrical content of his rhymes really blew me away, I was still impressed by his wordplay and confident flow. I want there to be more hip hop acts that sound like C.R.A.C Knuckles, in terms of bringing more musicality to the art and making music that is fun. I just wish they didn’t have to be such dicks about it.